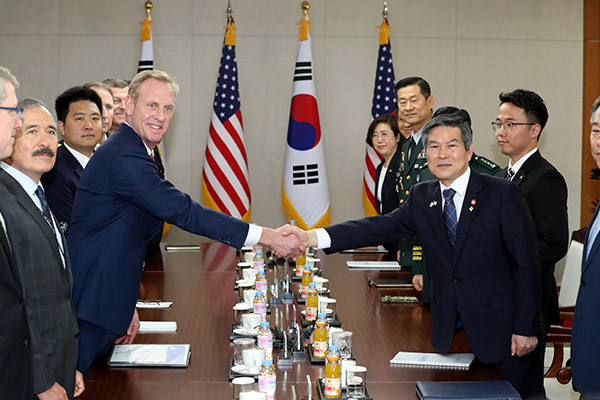 South Korean Defense Minister Jeong Kyung-doo held a meeting with acting U.S. Defense Secretary Patrick Shanahan in Seoul on June 3rd to discuss major bilateral issues, including cooperation for security conditions on the Korean Peninsula, their combined military drills in the second half of the year and the transfer of wartime operational control.  Here’s Yang Wook, senior researcher at the Korea Defense and Security Forum, to give his analysis about the recent defense ministers’ talks.

During their talks, the South Korean and American defense chiefs discussed a wide range of alliance issues. The discussion topics included the reduced or suspended combined military drills between the two allies as well as the schedule and conditions for an envisioned transfer of wartime operational control from the U.S. to South Korea.

Monday’s meeting between Jeong and Shanahan was the second one following their first in Washington in April, and it was Shanahan’s first visit to South Korea since taking the post of acting defense chief. Shanahan’s visit came on the heels of his attendance at a regional security forum in Singapore.

The agreement reached between the two defense officials during the Seoul meeting included the relocation of the headquarters of the South Korea-U.S. Combined Forces Command, now in Seoul, to the U.S. Forces Korea’s Camp Humphreys base in Pyeongtaek.

Initially, South Korea and the U.S. agreed to move the Combined Forces Command or CFC to the compound of the Korean Ministry of National Defense in Yongsan, Seoul. Under the request of the U.S., however, they finally agreed that the CFC, a large-scale organization, would move to the American base in Pyeongtaek to make the most of the facilities there.

Some doubt that the CFC positioned within the U.S. base will function effectively, especially in regards to Seoul’s preparations to take over wartime operational control or OPCON of its armed forces.  But basically, the CFC is equally shared by the two allies, and I don’t think the relocation move is in discord with the true nature of the bilateral alliance.

When South Korea and the U.S. first agreed on the Yongsan Relocation Plan back in 2004, the CFC was set to move to Pyeongtaek. But the two sides agreed in 2014 to postpone the transfer of wartime OPCON indefinitely, and the CFC remained in Seoul. As the Moon Jae-in government pushed for the transfer again in 2017, Seoul and Washington agreed to relocate the CFC to the nearby Korean Defense Ministry compound for smooth communication between the chairman of the Joint Chiefs of Staff and the CFC. Now that the two sides have agreed to move the command outside of Seoul to Pyeongtaek, there are concerns that it might be difficult for both sides to maintain close communication and cooperation.

Apparently with these concerns in mind, the Defense Ministry in Seoul said that the two countries decided on the relocation plan in consideration of four factors including operational efficiency, time and cost. The ministry added that the militaries of the two allies would closely cooperate for plan’s smooth implementation.

In another agreement, a Korean four-star general, not the chairman of the Joint Chiefs of Staff in Seoul, will separately head a new Korea-U.S. joint military command once wartime control transfer is completed.

If the CFC was allowed to be operated inside the compound of the Defense Ministry, the future CFC would not need a separate commander. But the decision to name a Korean four-star general to lead the CFC shows the two allies respect the structure of the CFC and their alliance.

Currently, a U.S. general heads the CFC and follows instructions of both the South Korean and the U.S. chairmen of the Joint Chiefs of Staff. If the South Korean Joint Chiefs of Staff chairman leads the envisioned CFC to take a dual role, he will have to assume a lower post as well, which is rather unusual. Therefore, appointing a separate commander could be more appropriate.

It is considered unusual for the U.S. military to name a military official of its ally as the head of the Combined Forces Command. The two countries plan to hold the first test of Korea’s readiness to take over wartime command through a new joint exercise led by the Korean military in the second half of this year. The exercise will replace their summertime Freedom Guardian exercise as part of efforts to support peace efforts involving North Korea.

If and when the two military authorities successfully verify the South Korean military’s capability to lead a combined defense, Seoul could regain wartime OPCON of its troops from the U.S. earlier than expected.

South Korea and the U.S. agreed in 2014 that the transfer would be made when conditions are right. The conditions are South Korea’s key military capabilities necessary to lead the combined defense, early and essential readiness against North Korea’s nuclear and missile threats and a favorable security environment around the peninsula for a stable handover of wartime OPCON.

To fully meet the conditions, South Korea may need a considerable amount of time. But placing the CFC inside the American base and therefore using the facilities there may contribute to reducing the time needed for the transfer of wartime OPCON.

In 2014, South Korea and the U.S. agreed on the transfer of wartime OPCON when those conditions are met. The operational command system reflects the unique realities of the Korean War and national division, and there have been growing calls within South Korea for a quick handover of wartime OPCON in light of military sovereignty.

The South Korean government has tried hard to satisfy the necessary conditions to take back wartime OPCON by increasing the defense budget considerably. The defense chiefs of Seoul and Washington have also shared the view that significant progress is being made to fulfill the conditions for Seoul to assume wartime command. Moreover, the decision to relocate the Combined Forces Command is expected to accelerate the process of the wartime OPCON transition.

The key is whether the South Korean military can actually perform command and control properly in time of war and judge the situation accurately. This is not just a matter of facilities but a matter of whether the nation secures an effective command and control system as well as an efficient decision-making system. The transfer might be possible before President Moon’s term ends, depending on South Korea’s efforts. The remaining task is to fully meet the conditions for the transition and verify it.

If South Korea’s wartime operational capabilities are verified successfully, experts speculate that the nation could take back wartime OPCON from the U.S. in 2022, the final year of Moon’s term. The defense ministers’ meeting between the two countries earlier this week seemed to serve as an important test of the operational system between the allies.