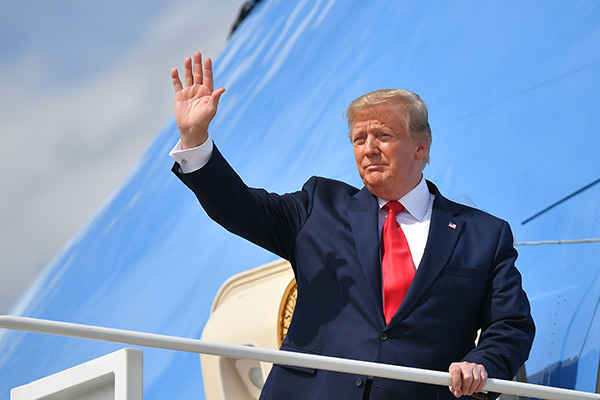 U.S. President Donald Trump will visit South Korea on Saturday and Sunday. Amid the months-long stalemate in dialogue between North Korea and the U.S., much attention is being paid to whether the American president’s trip to the South will help move the stalled negotiations forward. With more, here is Cho Sung-ryul, a researcher at the Institute for National Security Strategy.

It is becoming increasingly necessary to discuss the issue of a nuclear-free Korean Peninsula after the Hanoi summit ended without any agreement. Trump’s visit to South Korea will reaffirm that Seoul and Washington are in complete sync regarding the denuclearization issue. During his stay in South Korea, the U.S. president is expected to underline the potential benefits North Korea will enjoy after denuclearization as well as a message of peace.

Trump will visit Seoul after attending the G20 summit in Japan. As we know, the denuclearization issue is not just a matter between North Korea and the U.S. but involves neighboring countries, such as South Korea, China, Russia and Japan. During the period of the G20 summit in Osaka and the South Korea-U.S. summit in Seoul, the involved countries will exchange and coordinate their views on North Korea’s denuclearization.

Trump will have his first bilateral summit with South Korean President Moon Jae-in since their last meeting in Washington in April. The Moon-Trump summit comes on the heels of a series of bilateral summits between the U.S. and China and South Korea and China on the sidelines of the G20 summit in Osaka on Friday and Saturday.

The two leaders of South Korea and the U.S. will first figure out North Korea’s true intentions through Chinese President Xi Jinping, who visited Pyongyang last week, and then meet with each other to discuss ways to reopen denuclearization talks.

The recent exchange of personal letters between Trump and Kim Jong-un is also raising hopes for the possible resumption of bilateral negotiations.

It is assumed that Kim and Trump, in their letters, shared the view on the need to hold working-level negotiations in the near future to pave the way for their third summit.

North Korea may not like the idea of working-level talks, as it has preferred top-down diplomacy. So, the U.S. may have suggested to the North that the two sides keep the negotiations going based on a tentative agreement on four issues reached by Washington’s chief nuclear negotiator Stephen Biegun and his North Korean counterpart Kim Hyok-chol, right before the Hanoi summit in February. It is possible that North Korea may accept Washington’s proposal of additional discussions as a follow-up to the previous, tentative agreement, which was already approved by Kim Jong-un.

On June 23rd, North Korean media said that Kim Jong-un expressed satisfaction after he received a response letter from Trump. It is reported that the U.S. president suggested in the letter that the two sides find common ground on denuclearization through working-level negotiations. If the past is any guide, so-called “letter diplomacy” could serve as a breakthrough in restarting the stalled negotiations.

Biegun already held talks with his South Korean counterpart Lee Do-hoon, who is the Special Representative for Korean Peninsula Peace and Security Affairs, in the U.S. last week. Now that he’s in Seoul, Biegun is holding more discussions with South Korea on denuclearization in the run-up to the South Korea-U.S. summit.

Some predict that there might be working-level contact between North Korea and the U.S. at the truce village of Panmunjom around Trump’s vist. Biegun has a day and a half before Trump arrives in Seoul on Saturday morning. During this short period, he might be discussing this topic with government officials in Seoul. There is not much time left. But given the letters exchanged between Trump and Kim, we cannot rule out the possibility of some kind of working-level talks between the two sides.

There is speculation that North Korea and the U.S. may resume working-level negotiations on the occasion of Trump’s visit to Seoul. While the U.S. sticks to its principle of achieving North Korea’s final, fully verified denuclearization, a subtle change is being detected in Washington’s position as it seems to be considering a more feasible plan. What grabs our attention for now is whether Trump will visit the Demilitarized Zone separating the two Koreas.

This is Trump’s second visit to South Korea since his inauguration. During his first trip to the country in November 2017, he was unable to tour the DMZ due to unfavorable weather conditions. At that time, North Korea-U.S. relations continued to worsen.

The situation is different from two years ago. After the two summits between Kim and Trump, the U.S. president’s DMZ visit, if realized, will be a great opportunity to convey a peace message to the entire world, demonstrating a commitment to ending war and overcoming the division of Korea.

Visiting the DMZ has been a symbolic gesture made by most U.S. presidents, starting with Dwight D. Eisenhower, who visited the border in 1952 at the height of the Korean War. If Trump visits the DMZ, one of the world’s most heavily fortified borders, he will likely announce his commitment to resolving Korean Peninsula issues and promoting dialogue with the North.

Some are even speculating that there may be a surprise three-way summit between the two Koreas and the U.S. But a high official American official has said that Trump has no plans to meet the North Korean leader during his visit to South Korea.

In a desired scenario, Kim Jong-un could come down to the inter-Korean border to participate in a trilateral summit with Moon and Trump. But this is unlikely, considering various factors including time restraints. But Moon and Trump may travel to Panmunjom together and issue a joint peace declaration at the DMZ. It will be a very positive development if the leaders of South Korea and the U.S. send their shared message to North Korea. In another possible scenario, Trump may deliver a speech or hold a press conference to express his commitment to peace on the Korean Peninsula and possibly his third summit with the North Korean leader.

But North Korea and the U.S. have yet to narrow their differences over some thorny denuclearization issues, which were revealed at the Hanoi summit. The two sides may first need to address these problems through high-level talks. Trump’s South Korea visit could provide momentum to jumpstart some pragmatic dialogue between Pyongyang and Washington.

Will Trump be able to revive momentum for North Korea’s denuclearization at the DMZ, the symbol of Korea’s division? We’ll have to wait and see what message Trump will announce during his stay in South Korea. Depending on the message, the stalled denuclearization talks between North Korea and the U.S. could enter a new phase and move forward again.