No Deal in N. Korea-U.S. Nuclear Talks in Stockholm 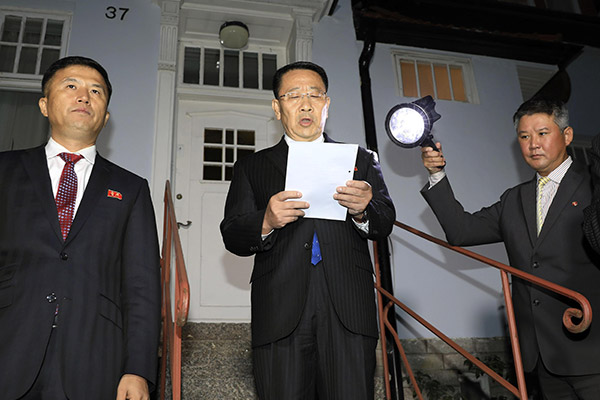 North Korea has expressed its strong dissatisfaction with the breakdown of its working-level denuclearization talks with the U.S. in Stockholm last Saturday. North Korea also rejected Sweden’s proposal that the North and the U.S. meet again in two weeks, even though Washington has accepted the offer.

Since the Stockholm talks ended without a deal, North Korea-U.S. nuclear negotiations have faced another setback. Let’s hear from Professor Kim Hyun-wook at the Korea National Diplomatic Academy.

Expectations ran high for the working-level nuclear talks between North Korea and the U.S., especially after North Korea’s First Vice Foreign Minister Choe Son-hui said earlier last week that the two sides agreed to resume the talks on October 5th. Unfortunately, the much-anticipated talks only revealed their widely differing views. While North Korea kept insisting that the U.S. come to the table with a new calculation method, the U.S. requested more intensive engagement to solve the many issues of concern for both sides. In other words, the U.S. wanted the two sides to narrow their differences during the working-level talks but Pyongyang hoped to confirm a change in Washington’s attitude. So, their expectations were different from the beginning.

North Korea and the U.S. sat face-to-face again in Sweden, seven months after the second summit between their leaders fell apart in Hanoi, but both sides left empty-handed yet again.

Shortly after the talks ended, North Korea’s chief negotiator Kim Myong-gil announced outside the North Korean Embassy in Sweden that the negotiations failed to fulfill their expectations and had finally collapsed. He blamed the U.S. for the failure of the talks, criticizing Washington for its inability to abandon its outdated attitude.

Despite John Bolton’s exit from the Trump administration, the U.S. still advocates a comprehensive big deal approach to North Korea’s denuclearization. The two sides are still in disagreement about how to create a roadmap to denuclearization and what the end state of denuclearization will be.

Regarding detailed measures that both sides may take, North Korea is unhappy about the level of sanctions relief and security guarantees offered by the U.S., which requested the dismantlement of the North’s Yongbyon nuclear complex plus additional steps. The North argues that the U.S. should do something now in exchange for the measures it has taken so far, such as the shutdown of its nuclear test site and the suspension of its nuclear and long-range missile tests. The U.S., on the other hand, says that it will take corresponding action, depending on the denuclearization measures that the North carries out. In other words, both sides are demanding one another to show something first.

The U.S. seems to have prepared for an improved proposal in regards to complete denuclearization and the establishment of a peace regime on the Korean Peninsula, as agreed upon during the first North Korea-U.S. summit in Singapore last year. However, it is speculated that the proposal did not meet Pyongyang’s expectations for more basic questions like the last stage of denuclearization, security assurances and a sanctions exemption.

Prior to last week’s working-level talks, U.S. President Donald Trump dismissed John Bolton, his former national security adviser who was well known for his hard-line stance toward North Korea, and also mentioned a “new method” for nuclear talks with Pyongyang. Against this backdrop, the North may have believed that the U.S. would make a striking concession. But it turned out that Washington’s negotiation card failed to satisfy Pyongyang. There is still a big gap between the nuclear solutions proposed by the two sides.

I think North Korea is pressed for time. It should get what it wants from the U.S. by all means, but it has already set an end-of-year deadline, after which it may press ahead with nuclear or long-range missiles tests. With only a few months left before the year ends, North Korea is in a defensive corner now.

North Korea is trying to pressure Trump, who is campaigning for reelection next year, but Trump is seeking to lead the negotiations with the North and make a deal in a way that he wants. Clearly, time is not on Pyongyang’s side.

North Korea’s top nuclear envoy Kim Myong-gil used harsh language after the Stockholm talks ended in failure. Following the negotiations, he hinted at the possibility that his nation may resume nuclear and intercontinental ballistic missile or ICBM tests. On his way back home on Monday, Kim also warned that Washington’s unpreparedness could lead to horrible consequences. Under pressure to meet the year-end deadline, the North seems to be employing its typical brinkmanship tactic to pressure the U.S. Some analysts predict that Pyongyang may resort to provocations again.

I guess there is a fifty-fifty chance of further provocations from North Korea. If Trump turns a blind eye to the North’s nuclear or ICBM test, as if nothing has happened, he will come under severe criticism domestically. So, it is highly likely that he will respond sternly to any serious provocation from the North. Pyongyang is well aware of that, so I think it will refrain from making a grave provocation—an act of crossing the red line. North Korea may take provocative actions but not extreme ones that could cross the line.

North Korea may carry out submarine-launched ballistic missile tests until the end of the year to urge the U.S. to make concessions, while refraining from breaking the mood for dialogue. Attention is now drawn to the potential choice made by Trump, who has to deal with multiple challenges, including a congressional impeachment inquiry and his battle for a second term. For now, the U.S. president will seek to manage North Korea in a stable way. But if the North shows signs of crossing the line, Trump may make an all-or-nothing decision.

With the denuclearization talks mired in stalemate again, it is uncertain if the North and the U.S. will resume working-level negotiations in the next few weeks.

It will be difficult for the two sides to resume the talks within two weeks. The U.S. wants to narrow differences with North Korea through intensive engagement and negotiations, while the North requested the U.S. to offer a new proposal. But the possibility of Trump agreeing to a bad deal with Pyongyang is getting smaller, as he has already been embroiled in an impeachment investigation. Although the U.S. is hoping to talk again with North Korea for more pragmatic progress in their negotiations, the North is likely to reject working-level talks for the time being.

North Korea-U.S. nuclear talks are facing another crisis with some saying that the situation has regressed to the state before the Hanoi summit. It is highly likely that the bilateral negotiations will remain deadlocked for some time.