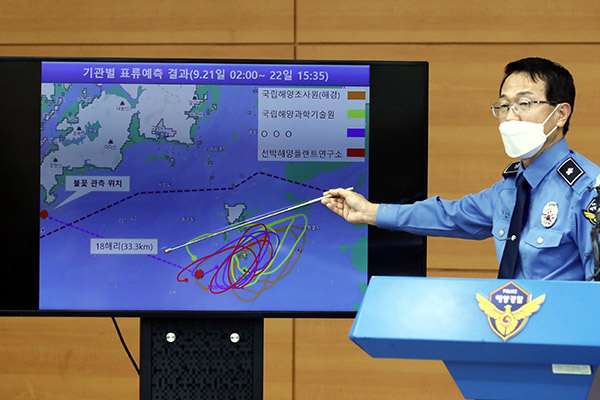 On September 24, South Korea’s Ministry of National Defense announced that a fisheries official who went missing near Yeonpyeong Island was shot dead by North Korea. According to Ahn Young-ho, head of operations at South Korea’s Joint Chiefs of Staff, the military confirmed, based on intelligence, that the official who was found in North Korean waters was killed and then burned by the North. Ahn strongly condemned the brutal act and urged North Korea to explain the situation and punish those responsible.

Here’s political commentator Choi Young-il to explain when and how this incident happened.

The official surnamed Lee was a first mate on a government vessel monitoring fishing boats. He was on duty aboard the ship from midnight to 4 a.m. on September 21. After 1 a.m., he left the steering house, saying that he would deal with some delayed work. After that, he disappeared. It was after midday on the 21st, when he was reported missing. Search operations were conducted, but he wasn’t found until the next day, when he was discovered in North Korean waters. On the 22nd, the man was spotted adrift by a North Korean fishing boat. Later, a North Korean patrol boat approached him. It seems North Korea considered how to deal with the South Korean man for hours. A shoot-to-kill order was issued at 9 p.m. At around 9:40 p.m., a report was made to inform the execution of the order.

In 2008, under the Lee Myung-bak government in South Korea, a South Korean tourist named Park Wang-ja was gunned down by a North Korean soldier while strolling along a beach near her hotel at the Mt. Geumgang resort. At the time, she entered a military area restricted to civilians and a North Korea sentry told her repeatedly to leave the premises. As she remained, the soldier shot her, in accordance with military guidelines. This is according to North Korea.

The latest incident is much worse. In South Korea, there is still controversy over whether the fisheries official attempted to defect to the North or if he accidentally fell into the water and was set adrift. Whatever the case, North Korea should have rescued the person who was drifting in its territorial waters, in light of international law and on humanitarian grounds. On the contrary, the North brutally shot him to death. The political community in South Korea has severely criticized the atrocity.

On September 24, the presidential office in Seoul said that it strongly denounced North Korea’s killing of the South Korean official. It stressed that North Korea should be fully responsible for the incident and to heavily punish those in charge. Right after the National Security Council standing committee meeting, secretary-general of the council Seo Joo-seok said that North Korean troops shooting an unarmed South Korean citizen who had no intention to resist cannot be justified by any reason. South Korea also demanded North Korea’s apology for the inhumane act.

In a surprising development, North Korean leader Kim Jong-un made a response the following day.

On September 25, North Korea delivered its position to the South in a message from the United Front Department. In the message, leader Kim Jong-un was quoted as saying that he was very sorry to President Moon Jae-in and the South Korean people for disappointing them with the unfortunate incident.

But North Korea’s explanation of the incident, in some part, differs from the account provided by the South Korean military. The North denied that the man’s body was burned. It claimed that his body was not discovered and that it only burned a floating object, the one of which he was riding on. North Korea also said that the man failed to respond clearly to questions about his identity. It added that he attempted to escape, acting as if he was about to cover something over his body, after two warning shots were fired, prompting North Korean soldiers to fire 10 shots at him. This explanation should be examined further.

North Korea has announced statements to express regret occasionally, when something negative happened in inter-Korean relations. This time, however, Kim Jong-un swiftly offered an apology himself and used the expression “sorry” twice. This is considered extremely unusual.

The North Korean leader has hardly ever used the word “sorry” before. After Kim Jong-un’s apology, the presidential office in South Korea unveiled another surprising fact. On September 8, President Moon sent a letter to the North Korean leader, who responded a few days later. The letters show the two leaders’ respect to each other and their commitment to keeping the momentum of peace going. Apparently, they were making efforts to create a peaceful mood in regional diplomacy amid the deadlocked nuclear negotiations between North Korea and the U.S.

Given that, the recent shooting incident seems to be accidental. Even so, South Korean citizens are enraged by the brutal, shocking incident, with the public sentiment toward North Korea growing negative. North Korea may have thought that it would be detrimental to its peace efforts. That’s why the North quickly sent an apology under the name of the top leader.

Two days after Kim’s apology, North Korea sent a warning message to the South. In a report by the North’s official Korean Central News Agency on September 27, Pyongyang told Seoul not to violate the western sea border, warning that the intrusion might escalate tension. North Korea said that such an act would arouse its vigilance and may lead to another unfortunate incident.

The report said that North Korea is considering the procedures and ways of handing over the man’s body to the South Korean side, if the body is recovered by the North. That is, North Korea says it will search its waters and South Korea should conduct search operations in its own waters, not violating the sea border. But the South Korean military refuted the claim, saying that it never intruded into North Korean waters.

For South Korea, the Northern Limit Line is the de-facto maritime border. But North Korea does not recognize it, turning the frontline waters into a major flashpoint, as seen in the two inter-Korean naval clashes in the area. Now, North Korea seems to be seeking to make the waters south of the line a disputed region again. It remains to be seen whether the North has brought up the issue intentionally or made the same claim once again in a war of nerves over the shooting death of the South Korean official.

On September 28, President Moon offered his condolences to the victim’s family. But more than half of his remarks that day were dedicated to his expectations for a breakthrough in inter-Korean relations. In particular, he attached special significance to Kim Jong-un’s own apology for the incident.

Some speculate that the recent incident may prompt South and North Korea to seek dialogue, but tension is likely to continue in bilateral ties for some time.

The South Korean president hopes that the latest incident will not stoke military tension in the region. Rather, he wishes it will accelerate the process of declaring an end to the Korean War and facilitate inter-Korean exchanges and communication, so any incident like this will not happen again. South Korea’s call for reopening the bilateral military communication line can be understood in this context.

While the president stresses the importance of peace, the key is anti-North Korea sentiment in the South Korean public. Of course, South Korea should demand that the North find out who issued an order to shoot the man and punish him. Leaders of both Koreas will have to consider how to discuss ways to prevent a recurrence of such an incident.

Depending on the recovery of the victim’s body and North Korea’s cooperation to find out the truth behind the shooting, the recent incident could be an opportunity to turn the situation around in inter-Korean ties or may only cause public anger to rise.

North Korea should show a responsible attitude, while its leader must prove that his apology is sincere. The South Korean government, for its part, should conduct a joint investigation with North Korea to find out exactly what happened and hold the North accountable.