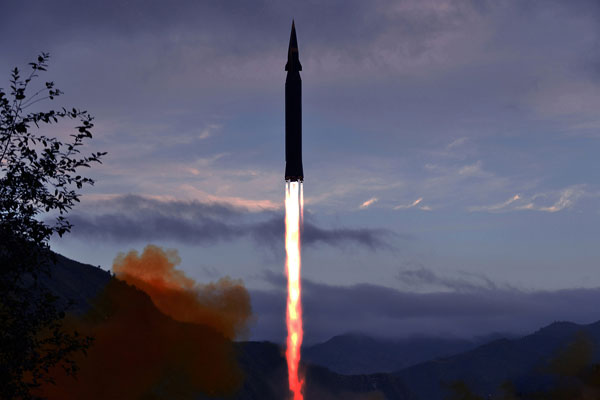 In a statement on September 25, Kim Yo-jong expressed Pyongyang’s commitment to taking steps to improve relations with Seoul, including an inter-Korean summit, on the precondition that South Korea should drop its double standards. By “double standards” she means the South should stop describing North Korea’s missile development and launches as “provocations,” while the South is developing its own weapons. After firing a missile this week, Pyongyang is watching whether or not Seoul refers to the launch as a provocation.

In a keynote speech to the 76th session of the U.N. General Assembly in New York on September 21, President Moon suggested that the three parties of the two Koreas and the U.S., or the four parties of the two Koreas, the U.S. and China, come together and declare that the war on the Korean Peninsula is over. In a press conference, the South Korean president explained that it is more of a political declaration to end the war and enter peace negotiations.

The Moon Jae-in government has continued to mention an end-of-war declaration at the U.N. The issue is also included in the Panmunjom Declaration that was adopted at the first inter-Korean summit between Moon and North Korean leader Kim Jong-un in April 2018. Cross-border ties have been at a standstill since the second North Korea-U.S. summit collapsed in Hanoi in February 2019. To break the deadlock and reactivate the peace process on the Korean Peninsula, Moon seems to have once again brought up the end-of-war declaration issue. The South Korean government wishes to declare an end to the war first, not waiting for North Korea to make a proposal or take action.

Moon has specifically pointed to a three or four-way declaration this year. The get-together of leaders from the three or four countries, if realized, would be a high-profile diplomatic event. It appears that the Moon government is making efforts to revive the top-down approach taken by North Korean leader Kim Jong-un and former U.S. President Donald Trump.

North Korea made an immediate response to Moon’s proposal to formally end the Korean War. Early in the morning of September 24, North Korea’s Vice Foreign Minister Ri Thae-song said in a statement that an end-of-war declaration would be a mere scrap of paper as long as the U.S. maintains its hostile policy toward the North.

In seven hours, Kim Yo-jong announced her statement, in which she said that Moon’s proposal could be an admirable idea if South Korea withdraws its hostile policy. The following day, Kim announced another statement, hinting at an inter-Korean summit.

The North Korean Vice Foreign Minister’s statement shows that the North rejected Moon’s offer. Kim Yo-jong, on the other hand, made a positive response to the South Korean president’s proposal in her back-to-back statements, even mentioning a possible inter-Korean summit. But the North also made it clear that South Korea must abandon its hostile policy and double standards before declaring an end to the war and mending ties with the North. Pyongyang’s actions and attitude are open to various interpretations. I think North Korea is being ambiguous on purpose in order to gain the upper hand at future relations with South Korea, whether their dialogue resumes or not.

Analysts say that North Korea has made an unusually active response to the South Korean president’s proposal to declare an end to the Korean War, in a strategic move to get sanctions relief and gain recognition as a nuclear weapons state. The proposal, regardless of its implementation, is believed to be advantageous to North Korea.

The U.S. imposes sanctions on North Korea under domestic law. But if an end to the Korean War is actually declared, North Korea can justify the lifting of those sanctions. Currently, North Korea is designated by the U.S. as one of state sponsors of terrorism. Once the end of war is declared, however, North Korea could request the U.S. to lift the sanctions as the two countries would no longer be considered in hostile relations. Furthermore, the North could also ask for the U.N. to lift its sanctions as well. After the declaration, the role of U.S. Forces Korea and the South Korea-U.S. alliance could be questioned. That is, many might question why U.S. troops are stationed in South Korea even though North Korea and the U.S. would not be in hostile relations.

At present, though, I don’t think the proposal will be implemented, considering Washington’s foreign policy. The end-of-war declaration will pose a significant diplomatic burden on the U.S.  But even if the proposal is not realized, it’s not too bad for North Korea. South Korea has made the proposal and North Korea has accepted it. China could also agree on the proposal, while the U.S. may reject it. In this frame, North Korea has nothing to lose.

This month alone, North Korea pressed ahead with missile test-firing three times and announced three statements aimed at South Korea and the U.S. Engaging in a show of force and mentioning the possibility of conditional dialogue at the same time, North Korea is explicitly employing its typical two-track tactic of taking a hard-line stance and a conciliatory one. Attention is being paid to North Korea’s next move.

I think North Korea is launching an offensive against South Korea and the U.S. on the whole. On September 15, Kim Yo-jong said that North Korea has a five-year plan for the development of defense science and the weapons system. At the eighth congress of the Workers’ Party in January this year, leader Kim Jong-un said his country would develop new weapons. With that said, I’d wager North Korea will follow through with that declaration.

North Korea made positive statements last week and fired a missile this week. For South Korea, it is important to confirm if North Korea is really committed to a better relationship with the South. As the first step, Seoul should see if Pyongyang engages in inter-Korean dialogue without attaching additional conditions. Amid the COVID-19 pandemic, it is difficult to hold inter-Korean talks as well as North Korea-U.S. dialogue. Even if negotiations may take place somehow, it is also challenging to reach an agreement, not to mention implement it. The Beijing Olympics will be held in February next year, while South Korea will hold the presidential election the following month. Around that time, North Korea may turn to a peace offensive. We need to look at the situation from a longer perspective.

The U.S., the U.K. and Germany have denounced North Korea’s missile test-firing, urging the country to return to the dialogue table. North Korea should show its sincerity toward denuclearization and make greater efforts to engage in dialogue.