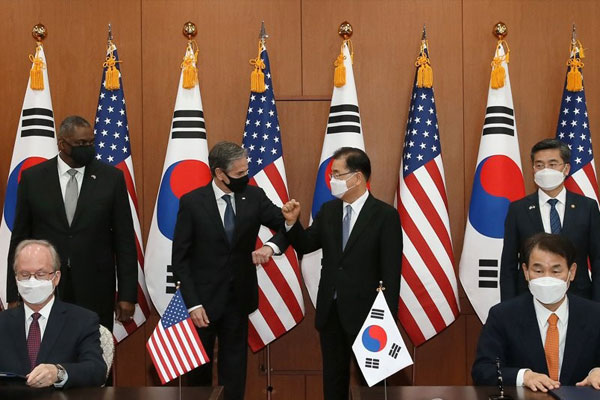 South Korea and the U.S. held the “two-plus-two” meeting of their foreign and defense ministers in Seoul on March 18. At the end of the talks, the participants, namely, South Korean Foreign Minister Chung Eui-yong and Defense Minister Suh Wook as well as U.S. Secretary of State Tony Blinken and Defense Secretary Lloyd Austin, announced a joint statement, the first of its kind between the Moon Jae-in government and the Joe Biden administration. Here’s political commentator Lee Jong-hoon to tell us more about the statement.

The so-called two-plus-two meeting is the first of its kind in five years and also the first meaningful high-level talks between South Korea and the U.S. under the Biden administration. For the Moon Jae-in government in South Korea, the meeting provided some clues about the U.S. administration’s foreign policy line overall. For both sides, it was an opportunity to fine-tune their North Korea policies.

Ahead of the foreign and defense ministers’ talks of South Korea and the U.S., North Korean leader Kim Jong-un’s sister Kim Yo-jong and the North’s first vice foreign minister Choe Son-hui announced a statement back to back.

On March 16, Kim denounced South Korea, saying that it will be difficult to see again the spring days three years ago. On the early morning of March 18, when the two-plus-two meeting of South Korea and the U.S. was planned, North Korea’s official Korean Central News Agency carried Choe’s statement, in which she said that there will be no dialogue between North Korea and the U.S. unless the U.S. drops its hostile policy towards the North.

North Korea remained silent during the presidential election period in the U.S. and during the early days of the Biden administration. But the North seems to have concluded that it’s time to respond.

While Kim’s message has the purpose of warning South Korea not to be swayed by the U.S., Choe’s statement is aimed at pressuring the U.S. before any dialogue between the North and the U.S.  It seems North Korea wants to start the negotiations with the Biden government from a more advantageous position than the former Trump administration. Basically, North Korea wants the U.S. to recognize it as a nuclear weapons state and lift sanctions against it. That’s the starting point that North Korea is hoping for. I think Pyongyang has stressed this part once again.

But the atmosphere in the U.S. is different. The U.S. has openly brought up the human rights issue, which North Korea is highly sensitive about. During a press conference after the recent foreign and defense ministers’ talks of Seoul and Washington, the U.S. also stressed the importance of full implementation of U.N. Security Council resolutions, in regards to North Korean nuclear and ballistic missile issues. Apparently, the U.S. keeps its distance from the possibility of easing sanctions on North Korea.

Meanwhile, on March 19, North Korea’s Foreign Ministry announced that it would sever diplomatic ties with Malaysia in protest of the Southeast Asian country’s decision to extradite a North Korean businessman to the U.S.

A North Korean businessman named Mun Chol-myong, who had lived in Malaysia for about ten years, was accused of supplying prohibited luxury items such as liquor and watches from Singapore to North Korea and laundering money through shell companies. After a federal judge in Washington issued a warrant for Mun’s arrest in May 2019, the U.S. Federal Bureau of Investigation continued to request the Malay government to extradite him to the U.S.  Malaysia’s top court finally granted this request. North Korea claims that the whole story was fabricated as it never used Mun in violation of international sanctions. The North argues that the extradition request from the U.S. doesn’t make any sense and warns that the U.S. will pay a due price for that.

The North Korean businessman in question appeared in federal court in Washington on March 22. The U.S. Department of Justice says that Mun is the first North Korean national to stand trial at a U.S. court. He is accused of laundering funds worth 1.5 million dollars through the American financial system in order to transport luxury goods to North Korea. The U.S. Department of Justice believes that Mun is affiliated with North Korea’s Reconnaissance General Bureau, which is subject to U.N. sanctions.

Attention is drawn to how this case will influence North Korea-U.S. relations. The Biden administration is likely to take issue with specific cases involving North Korea. That is, sanctions against North Korea will take more concrete form. I think the U.S. is employing a strategy to strike a blow against North Korean leader Kim Jong-un in a move to prod the country into taking denuclearization steps. This type of pressure by the U.S. will certainly draw a strong backlash from North Korea. On the flip side, though, the North may have to make a new proposal related to denuclearization in order to reduce the damage. I guess this is what the U.S. government is expecting.

With conflict between the U.S. and China intensifying, North Korean leader Kim Jong-un and Chinese President Xi Jinping have exchanged messages that stress the importance of unity and cooperation between their countries. The exchange of messages on March 22 came right after the U.S. and China ended their two-day high-level talks in Alaska without producing a joint statement last week. Earlier last week, during its foreign and defense ministers’ meeting with Japan and South Korea, the U.S. mentioned unprecedented threats from China and North Korea. Analysts speculate that the exchange of messages between North Korea and China at that particular point in time is actually directed at the Biden government in the U.S.

The messages do not include anything particular. I think timing is more important. The U.S. wants to pressure China through cooperation with its allies such as South Korea and Japan. Similarly, China is actively seeking to form an anti-U.S. coalition using its allies.

North Korea is expected to use the same method. That is, it will likely boost cooperation with China in order to strengthen its bargaining power with the U.S.  The recent exchange of messages shows that North Korea’s interests coincide with China’s. I imagine Pyongyang has studied the Biden administration’s possible North Korea policy. In line with the U.S.’s pursuit of specific sanctions on North Korea, Pyongyang may also respond to Washington’s move in a more specific and careful way.