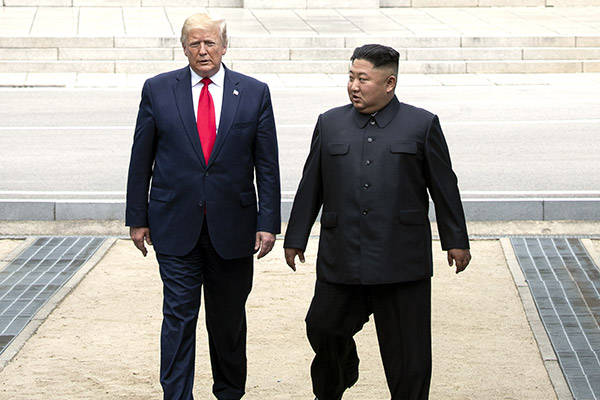 North Korea and the U.S. have traded barbs since Pyongyang’s announcement of a “very important test” at its satellite launching ground last weekend.

U.S. President Donald Trump warned that North Korea might lose everything, while the North retorted with back-to-back statements. Here’s Oh Gyeong-seop, a researcher from the Korea Institute for National Unification, with more.

North Korea and the U.S. have engaged in an intense verbal battle since the North announced on December 8th that it had carried out a very important test at its Sohae Satellite Launching Station the previous day. Trump said that North Korean leader Kim Jong-un could lose everything if he acts in a hostile way. In response, Kim Yong-chol(김영철), the head of North Korea’s Asia-Pacific Peace Committee said in a statement on December 9th that Trump has too many things that he does not know about North Korea and that the North indeed has nothing more to lose. He went on to say that if things continue to go this way, Kim Jong-un’s perception about Trump may change. Trump and North Korea have exchanged heated rhetoric over what the North called a “very important test.”

There are concerns that the situation on the Korean Peninsula could revert back to 2017 when tensions between North Korea and the U.S. were so intense that some even worried about a war breaking out. Mr. Oh explains what North Korea’s “important test” is about.

While North Korea did not disclose images or the results of the test, Jeffrey Lewis, director of the East Asia Nonproliferation Program at the Middlebury Institute of International Studies unveiled satellite images of the North Korean satellite launching site in question. The images show that the North undertook a rocket engine test.

An official at the South Korean National Assembly’s intelligence committee said that Pyongyang’s recent test involved a liquid-fuel engine for rockets, not a solid-fuel one.

Military experts have raised the possibility that it was a “clustering test” to check the performance of what North Korea calls the Mt. Baekdu engine for an intercontinental ballistic missile or ICBM.

That’s why the U.S. is responding firmly to the provocation, while carefully watching the situation.

In a press conference after his first summit with Kim Jong-un last year, Trump said that North Korea promised to dismantle its Sohae Satellite Launching Station, also known as the Tongchang-ri missile test site. The Pyongyang summit between the two Koreas in September of last year also produced an agreement to shut down this place permanently. But at the very same site, North Korea has pushed ahead with a provocation.

Although Pyongyang has not specified what the test was, South Korean military authorities assume that it was a rocket engine clustering test using liquid fuel. Clustering refers to combining multiple engines to enhance the performance of a projectile. This is the first time North Korea has disclosed a rocket engine test since March of 2017, when it carried out the test of the “Mt. Baekdu engine,” which Kim Jong-un touted as “revolutionary.”

Previously, North Korea conducted the rocket engine tests for its Hwasong-14 and Hwasong-15 ICBMs at this site. It means the North may possibly test an ICBM as a Christmas gift for the U.S., as it has warned before. Apparently, Pyongyang is attempting to draw concessions from the U.S. by stoking tension amid their stalled nuclear negotiations. The North is implying that it could press ahead with additional tests that will certainly go beyond a rocket engine test. In other words, Pyongyang is provoking and pressuring Washington in a bid to gain what it wants.

North Korea declared a moratorium on nuclear and long-range missile tests before its nuclear negotiations with the U.S. Since the breakdown of their second summit in Hanoi, however, Pyongyang has demanded that Washington present a new proposal and warned that it might lift its self-imposed moratorium.

We cannot rule out the possibility that the North may go as far as to test-launch an ICBM unless the U.S. takes some measures, including easing sanctions on the North. Testing an ICBM, a missile that has a long enough range to hit the U.S. mainland, is an act of crossing the “red line” set by Washington. The U.S. will find it difficult to tolerate such a grave provocation and may respond sternly.

As I said before, there is a possibility of North Korea testing an ICBM as a Christmas gift for the U.S. If that happens, nuclear talks between the North and the U.S. will be fruitless. To pressure the North to refrain from conducting an ICBM test, the U.S. convened a U.N. Security Council meeting. But if the North still pushes ahead with an ICBM provocation, North Korea-U.S. relations will inevitably worsen and Washington may impose even stronger sanctions on Pyongyang.

The U.N. Security Council held a meeting on Wednesday to discuss North Korea’s additional provocation. It is certainly notable that the U.S. requested the meeting for the first time in two years, given that it has backed out from the council’s criticism of North Korea. Obviously, the U.S. is responding strongly to the North, which seems to be deviating from the negotiation track, and placing pressure on the regime through international cooperation. The conflict between the two countries is expected to intensify further.

Having engaged in a war of words, North Korea and the U.S. now seem to be ready to take action against each other. The North has already conducted the test of a rocket engine that could be used for an ICBM and claimed that the test was successful.

If the two sides manage to reach a compromise on the nuclear issue through dialogue, they will refrain from any aggressive action. But the prolonged deadlock in negotiations may frustrate North Korea and prod it into resorting to provocations, which will heighten tensions further. The U.S., for its part, may respond to North Korea’s provocative acts aimed at creating a crisis by strengthening pressure and sanctions.

North Korea is stepping up its criticism of and threats against the U.S., while Washington is moving to put greater pressure on Pyongyang. In their fierce tug-of-war, the harsh rhetoric is now escalating into action. We’ll have to wait and see how their relations will unfold, especially around Christmas and January 1st of next year when Kim Jong-un will announce his New Year’s message.