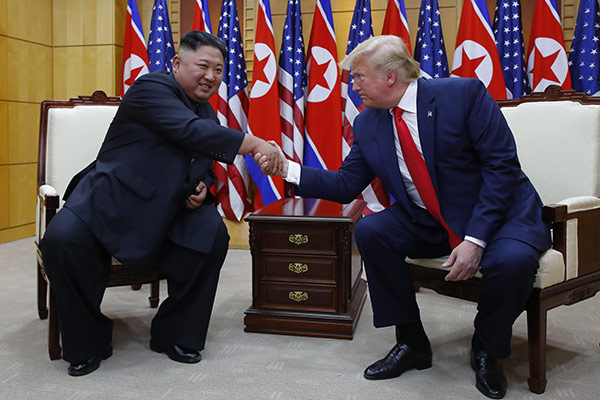 North Korea’s First Vice Foreign Minister Choe Son-hui said that Pyongyang is willing to hold working-level nuclear negotiations with Washington. U.S. President Donald Trump gave a positive response to the proposal, saying that having meetings is a good thing, which means the two countries are likely to reactivate their stalled denuclearization talks. Here is Shin Beom-chul, director of the Center for Security and Unification at the Asan Institute for Policy Studies, with more.

North Korea seems to have decided to resume talks with the U.S. quickly, but it is too early to conclude that there is a shift in North Korea’s position. Perhaps, Pyongyang may not want the international community to believe that North Korea is rejecting dialogue. The North says that it is ready for working-level negotiations with the U.S., but basically, its demands remain unchanged. It is calling for a new calculation method from Washington. In other words, the North is repeating its previous request that the U.S. should accept North Korea’s phased approach to denuclearization and ease sanctions on the regime. So, even if working-level negotiations reconvene, the two sides are expected to engage in an intense tug of war.

According to the North’s Korean Central News Agency, Choe made a statement on Monday night that the country is willing to talk with the U.S. in late September at a time and place agreed to by both sides. Although North Korea urged the U.S. to come forward with a new proposal that could be acceptable to Pyongyang, the offer to return to dialogue itself is considered an encouraging sign. It is interesting to note that North Korea’s dialogue offer came after a series of remarks from the U.S.

Last week, U.S. Special Representative for North Korea Stephen Biegun hinted at the possibility that South Korea and Japan may consider having nuclear weapons themselves if North Korea fails to denuclearize.

The warning may have put some pressure on China and made North Korea think that it should not reject dialogue itself.

North Korea probably found it necessary to seek dialogue for some other reasons. On the surface, Chinese Foreign Minister Wang Yi’s recent visit to Pyongyang had the purpose of strengthening bilateral ties. But Beijing may have called for Pyongyang to return to the negotiation table during the top Chinese diplomat’s visit to the North Korean capital.

It is very unusual for a U.S. official to comment on the possibility of South Korea and Japan seeking their own nuclear capabilities, which is a taboo topic in the U.S.  Apparently, the U.S. is pressuring North Korea by mentioning the worst-case scenario for Pyongyang in case their nuclear negotiations fail.

On September 8th, two days after Biegun’s remarks about nuclear armament by South Korea and Japan, Secretary of State Mike Pompeo said that he thinks President Trump would be very disappointed if Chairman Kim doesn’t return to the negotiating table.

It seems Washington’s gesture and pressure against Pyongyang, coupled with North Korea’s own decision regarding dialogue, prompted the North to propose the resumption of talks with the U.S. Meanwhile, the short-range projectiles fired by the communist regime on Tuesday are seen as their strategy in consideration of future negotiations with the U.S.

The projectiles flew about 330 kilometers. Even if they turn out to be missiles, the short-range missiles do not really threaten the U.S. The projectile launch, which came right after their dialogue proposal, shows that North Korea may launch a long-range missile if the U.S. fails to present a new method of calculation which could result in a breakdown in bilateral negotiations. That is to say, North Korea is using dialogue and pressure simultaneously.

By firing the two short-range projectiles, North Korea seems to be asking the U.S. once again to come up with an alternative calculation, which North Korean leader Kim Jong-un mentioned in his speech at a session of the Supreme People’s Assembly in April. Obviously, Pyongyang is playing two different cards—dialogue and provocation—at the same time to boost its bargaining power at future negotiations with Washington.  Mr. Shin now explains what the new calculation is.

Since the collapse of the Hanoi summit between North Korea and the U.S. in February of this year, the North has demanded that the U.S. make a new calculation. In Hanoi, the U.S. wanted the North to take comprehensive denuclearization steps to dismantle its main nuclear complex in Yongbyon and more while also removing its nuclear materials and weapons. The U.S. insisted that sanctions would be eased only after North Korea’s denuclearization is confirmed.

Pyongyang, on the other hand, is opposed to Washington’s one-shot scheme. The U.S. says it could discuss an improvement in bilateral relations, humanitarian aid for the North and the establishment of a peace regime at their negotiations. But North Korea argues that the U.S. should include sanctions relief in a step-by-step denuclearization process advocated by the North. That’s the new calculation North Korea is talking about.

North Korea and the U.S. have widely differing views on the method of denuclearization.  While the U.S. wants to sign a comprehensive, big deal to speed up the denuclearization process, North Korea maintains that it should achieve denuclearization in phases, starting from the dismantlement of its Yongbyon nuclear facility. In return, the North insists that the U.S. provide a security guarantee for the regime and lift sanctions. But Washington is unlikely to accept those unilateral steps which will be advantageous for only Pyongyang. Therefore, it will be difficult for the two sides to find a compromise at their future negotiations.

North Korea and the U.S. are likely to resume negotiations in late September. But it will take time to narrow their differences. The Trump administration may clarify what it can offer to North Korea in November or December, when it will feel more pressured to reach a compromise, with next year’s presidential election in mind. The fate of their denuclearization talks next year hinges on whether or not the North will accept the offer. For that reason, the prospective working-level negotiations are crucial. I hope North Korea will pledge to take practical denuclearization measures that can win international trust at the negotiations and receive the compensation that it needs in return.

It seems momentum for dialogue between North Korea and the U.S. has been revived. In a surprise development on Tuesday, President Trump abruptly dismissed his national security adviser John Bolton, a hard-liner on Pyongyang, raising speculation about a shift in the Trump administration’s North Korea policy.

The key is how extensively both sides will make concessions. Their denuclearization negotiations could face an important turning point later this month, when the working-level talks are expected to take place.