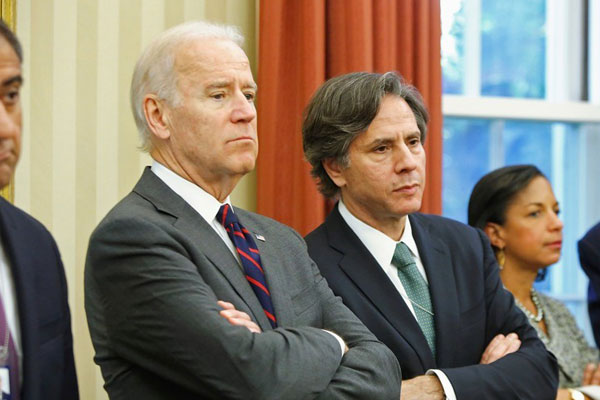 U.S. President-elect Joe Biden’s transition team unveiled nominees to the Cabinet and the White House on November 23, signaling the start of the process of filling key posts in the next government.

Keen attention is being paid to officials who will head the foreign policy team. They include Secretary of State-nominee Tony Blinken, who held top foreign affairs posts during the last two Democratic administrations under Bill Clinton and Barack Obama. Prior to the presidential election, he served as a member of Biden’s foreign policy advisory group as one of Biden’s close aides.

Regarding diplomacy surrounding the Korean Peninsula and the North Korean nuclear issue, South Korea pays close attention to Tony Blinken, among others. He once called North Korean leader Kim Jong-un “one of the worst tyrants.” He also strongly criticized Trump’s diplomacy with North Korea, saying that the U.S. had three empty summits with no preparation with Kim. Given that, some analysts forecast that the Biden government will put greater pressure on North Korea.

However, the Obama administration did propose diplomatic negotiations to North Korea several times. Above all, North Korea’s nuclear capabilities have significantly advanced now. For these reasons, it is speculated that Biden’s strategy will be different from Obama’s.

I don’t think Blinken will adopt an entirely hard-line stance toward North Korea, as he advocates negotiations. Before engaging in any negotiations, the Biden government is likely to carefully analyze North Korea’s nuclear capabilities first. The U.S. will have to verify if Pyongyang has truly completed the development of its new long-range missile, which it has unveiled recently. I imagine the U.S. will pursue a more realistic approach to North Korea, whether it takes a moderate or hard-line stance.

Both Blinken and Sullivan have said in the past that the Iran nuclear deal would be ideal in addressing North Korea’s nuclear program. Blinken, in particular, played a key role in the Iran deal when he served as national security adviser to then-Vice President Biden under Obama. During a CBS program in September, he said that the Obama government managed to get success with Iran and he believes the U.S. will have opportunities to move in the same direction with North Korea. Sullivan also said that when dealing with North Korea, the U.S. would employ a similar strategy that had been applied to Iran. He made the remarks in a foreign policy discussion at Asia Society in New York in May 2016, when he served as a top policy adviser for Hillary Clinton’s presidential election campaign. So, what exactly is the Iran-type deal?

The U.S. deals with countries developing nuclear weapons in two different ways. First, it demands the complete renunciation of nuclear programs in a big, comprehensive deal, followed by large-scale economic assistance. This method applied to the Libyan model. Second, the so-called Iranian model calls for a step-by-step approach to nuclear dismantlement. For North Korea, it could induce North Korea to eliminate its nuclear program in a phased manner in exchange for the partial easing of economic sanctions. The phased approach takes time, of course. As seen in the remarks by Blinken and Sullivan, the Biden government will likely choose this method.

Under the Libyan model, a country is required to abandon its nuclear weapons development completely. It is different from the Iranian model, in which the denuclearization process is split into phases, and compensation is made in each phase. Former U.S. National Security Advisor John Bolton stressed the need for the Libyan model to make North Korea give up its nuclear ambitions.

However, the presidential office in South Korea believed that it would be difficult to apply this model to North Korea.

In the Libyan model, a country must scrap its nuclear program first, not only freezing its nuclear facilities but eliminating all its nuclear warheads and missiles as well. After verification of the complete nuclear renunciation, the country will receive massive economic aid. Following Libya’s nuclear dismantlement and the lifting of economic sanctions against the country, the U.S. normalized diplomatic ties with Libya in 2006.

But this model drew a strong backlash from North Korea. Both North Korea and the Moon Jae-in government in South Korea prefer a phased approach. North Korea favors a give-and-take process, in which its nuclear infrastructure will be removed step by step and sanctions on North Korea will be eased in phases. It is highly likely that the Biden administration will employ this method.

Attention turns to how North Korea will respond to the Biden government’s potential adoption of the Iranian model at their nuclear negotiations. Basically, the U.S. believes that it can elicit a change of attitude from North Korea by placing international sanctions and pressure and clearly showing the communist country the potential benefits it can receive as a result of the abandonment of its nuclear weapons.

However, North Korea is different from Iran, which has experienced a capitalistic economy. For this reason, some analysts say that it will be difficult for the U.S. to apply the Iranian model to North Korea.

For North Korean leader Kim Jong-un, what matters the most is regime maintenance and security. He will refuse to give up on his nation’s nuclear program to the bitter end.

North Korea will seek to gain recognition as a nuclear state first and hold negotiations with the U.S.

North Korea has not resorted to brinkmanship tactics recently, as it did habitually in the past, and refrained from getting too tough. Obviously, it wants to keep dialogue momentum alive to gain something. At present, the impoverished nation acutely feels the need to get sanctions eased. It probably thinks it will have to make some concession in the process. Contrary to prior concerns, North Korea did not make a provocation before the U.S. presidential election. It reflects that the North has some expectations about the new U.S. administration.

Both North Korea and the U.S. are thinking hard about how to gain the upper hand in their future negotiations under the new U.S. government. In a strategic move, North Korea may test-fire its missiles early next year. In this situation, the South Korean government needs to examine the Biden government’s North Korea policy and prepare thoroughly against any provocation from North Korea. It’s time to consider every possible scenario and devise carefully-planned countermeasures.