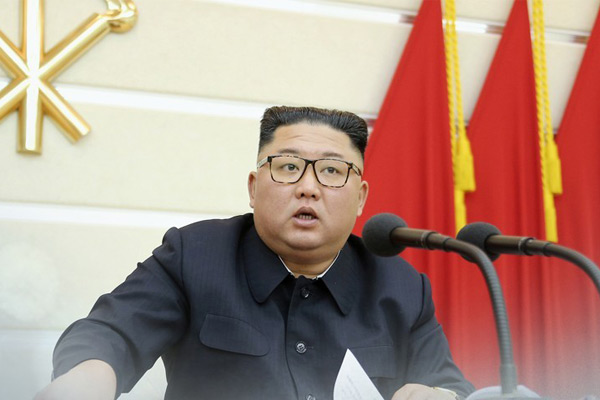 North Korea has decided to convene its Supreme People’s Assembly in late January, following the eighth congress of its ruling Workers’ Party in the same month.

Sessions of the Supreme People’s Assembly, which is equivalent to South Korea’s National Assembly, are typically held in April. But next year, the North will hold the parliamentary session to be attended by hundreds of delegates three months earlier than usual, despite the COVID-19 crisis. Here’s political commentator Choi Young-il with more.

The Supreme People’s Assembly is North Korea’s legislative organization. It is usually convened in April, or March at the earliest, to announce important policy decisions. It examines major state plans for the year, announces personnel reshuffles at state agencies and reviews budget plans. Its role seems to be similar to that of South Korea’s National assembly. But North Korea’s parliamentary session is only held once or twice a year. Attention turns to why the North decided to move up the meeting date to January.

North Korean leader Kim Jong-un’s New Year’s speech, the party congress and the assembly session will all take place in January to announce the nation’s detailed policy lines. By concentrating the three major events in the same month, North Korea will likely deliver its clear message to the U.S.  Analysts imagine that Pyongyang may announce some legal measures to solidify its status as a nuclear state or officially demand for nuclear disarmament talks in a bid to gain the upper hand at the negotiations with the new U.S. government led by Joe Biden.

A new government will be inaugurated in the U.S. on January 20 next year. In fact, North Korea-U.S. relations have been at a standstill for nearly two years. North Korea might show its negotiation card first to the incoming U.S. administration to find a breakthrough in the stalled bilateral relations.

Domestically, leader Kim Jong-un will enter his tenth year in office in 2021. The leader has frankly apologized to his people for failing to keep his promise to revive the economy.

North Korea has an important mission to present a new, hopeful vision to the public next year. On top of North Korea-U.S. relations, the North is also expected to reset its economic goals at the Supreme People’s Assembly in January.

North Korea’s parliamentary session in January may possibly unveil a new team in charge of nuclear negotiations with the U.S.  U.S. President-elect Joe Biden has already finalized a team to deal with a North Korea policy. Unlike Trump, Biden is a veteran in diplomacy who values working-level negotiations. Given that, North Korea may let the leader’s sister Kim Yo-jong deal with foreign affairs or create a new nuclear negotiation team led by First Vice Foreign Minister Choe Son-hui. The North could also bring an old nuclear task force to the diplomatic forefront. Known as the “nuclear management team,” it had taken charge of nuclear negotiations with the U.S. since the mid-1990s when the North and the U.S. signed the Geneva Agreed Framework.

Kim Yo-jong slammed South Korea’s Foreign Minister Kang Kyung-wha on Wednesday for Kang’s recent remarks about North Korea’s anti-virus measures. Kim said that the North will never forget Kang’s words and she may have to pay dearly for it. Considering Kim’s attitude, some analysts predict that she could lead negotiations with the U.S. down the road. Others believe that the traditional “nuclear management team” will be more appropriate to handle negotiations with the Biden administration. Also known as the “New York Line,” the task force consisted of career diplomats including roving ambassador Kim Myong-gil(김명길) and former foreign minister Ri Yong-ho(리용호). Regarding a new negotiation team, we’ll have to wait and see what decisions the Supreme People’s Assembly will make in January.

Attention is also drawn to a potential change in North Korea-U.S. relations on the occasion of the inauguration of the Joe Biden administration in the U.S. in January.

While attempting to contact with the Biden administration, the South Korean government is thinking hard about how to prevent North Korea’s strategic provocation. It regards the month of January as a golden time to bring some positive change to North Korea-U.S. relations as well as inter-Korean ties.

North Korea and the U.S. were on the brink of war in 2017 but their relations suddenly changed for the better the following year. Indeed, politics is a living thing. Diplomacy is another living thing that is easily influenced by decision-makers and complicated situations. North Korea will likely announce a certain message in January, either through the leader’s New Year speech or through the Supreme People’s Assembly.

South Korea, for its part, needs to analyze what North Korea’s true intentions are and create a favorable diplomatic mood as a mediator to induce North Korea and the U.S. to come to the dialogue table. Next year, the Moon Jae-in government enters the final phase of its five-year term. It is expected to make a bolder and stronger attempt to produce some positive result in inter-Korean relations and in North Korea-U.S. ties.

Meanwhile, diplomatic experts raise the possibility of North Korea’s provocation aimed at the incoming government in the U.S.  U.S. Deputy Secretary of State Stephen Biegun, who also serves as the U.S. Special Representative for North Korea, arrived in Seoul on Tuesday to discuss with South Korean officials bilateral coordination on North Korea. In a webinar on December 2, Chairman of the U.S. Joint Chiefs of Staff Mark Milley also said that North Korea might stage military provocations. U.S. reconnaissance planes flew over South Korea for three days in a row late last month.

It is assumed that they tried to detect any signs of provocation from North Korea in advance.

North Korea habitually made provocations around the time when a new administration was inaugurated in the U.S.  Afterwards, the North chose to change its attitude or continued to take a hard-line stance and confronted the U.S.  Considering North Korea’s previous preemptive military provocations, many security experts speculate that the communist regime may launch a provocation around January 20 next year. If that happens, it is important how high the level of provocation will be. North Korea unveiled improved weaponry in a military parade in October. At this level, the North seemed like it wasn’t trying to provoke Trump. Nevertheless, some reports said that Trump was enraged. Anyways, even before Biden’s inauguration, the U.S. administration will likely continue to warn North Korea against any provocation.

North Korea has signaled that January will be an important political season, as it will hold a party congress and a parliamentary session back to back. The country has raised its COVID-19 quarantine level to the highest, stressing the importance of the nationwide response to the pandemic. Still, it has decided to hold a series of large-scale political events involving hundreds of people next month.

It remains to be seen what policies North Korea will announce in January, in regards to domestic and foreign affairs.