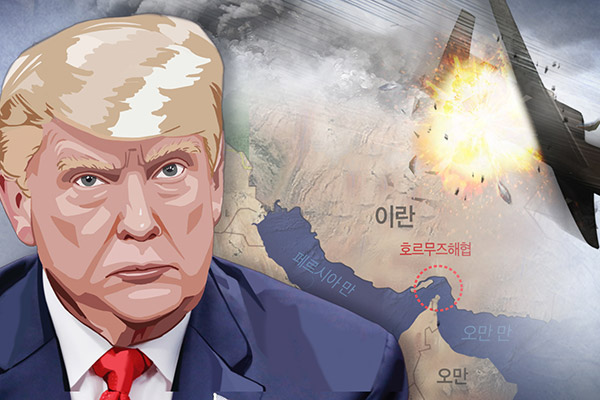 On July 8th, the International Atomic Energy Agency confirmed that Iran enriched uranium beyond the previously-agreed enrichment level under a 2015 nuclear deal. The announcement was followed by a strong warning from the U.S. against Iran. The escalating conflict between the two countries is calling attention to relations between the U.S. and North Korea, with which the U.S. is also holding nuclear negotiations. Here is Shin Beom-chul, director of the Center for Security and Unification at the Asan Institute for Policy Studies with more.

Relations between Iran and the U.S. have gone from bad to worse. Last year, U.S. President Donald Trump withdrew the U.S. from a nuclear agreement known as the Joint Comprehensive Plan of Action that was signed by Iran and major world powers in 2015 under the Obama administration. Of course, Washington’s unilateral withdrawal drew strong backlash from Tehran.

Iran has recently announced that it would soon exceed uranium enrichment above the 3.67 percent level set in the nuclear deal. In response, the U.S. is showing signs of strengthening sanctions against Iran, with U.S. Vice President Mike Pence bringing up the phrase “maximum pressure” again. The U.S. looks set to put stronger economic pressure on Iran, although it may not go as far as considering a military option for now.

On July 8th, Iran’s Atomic Energy Organization declared the virtual suspension of its commitment to the landmark nuclear accord. It also threatened to increase uranium enrichment to 20 percent purity if Europe fails to implement the nuclear pact properly. Before the agreement was signed, Iran had a stockpile of uranium enriched up to 20 percent. Weapons-grade material requires up to 90 percent of enrichment.

U.S. Vice President Mike Pence responded that the U.S. would continue to bring pressure on the Iranian economy and never allow Tehran to obtain a nuclear weapon. Some diplomatic experts compare the tense relations between Iran and the U.S. to North Korea-U.S. ties.

During a surprise meeting between Trump and his North Korean counterpart Kim Jong-un at the inter-Korean border village of Panmunjom on June 30th, the two sides agreed to hold working-level negotiations. Based on the friendly relations between the two leaders, the U.S. is unlikely to put additional pressure on North Korea, while still keeping sanctions in place, and the North wants to keep bilateral dialogue going. North Korea-U.S. relations are pretty good, but Iran-U.S. relations are not. In terms of their nuclear capabilities, North Korea is far superior to Iran. The U.S. is employing atypical diplomacy, placing pressure on Iran, while engaging in dialogue with North Korea.

The U.S. has been in a tug-of-war with both North Korea and Iran over the nuclear issue. But Washington’s attitude has been completely different when it comes to dealing with Tehran and Pyongyang. In addition to their two previous summits, the leaders of the U.S. and North Korea held a brief meeting last month and agreed on the resumption of working-level negotiations to discuss ways to move their stalled denuclearization talks forward.

On the other hand, the U.S. abandoned the nuclear deal with Iran, pressuring the country with economic sanctions and even military threats.  So then, why does the U.S. smile at North Korea and frown upon Iran?

The U.S.’s current attitude has to do with its international strategy. The U.S. perceives North Korea as a small, impoverished Northeast Asian country surrounded by China, Russia, Japan and South Korea, even though it possesses nuclear weapons. Therefore, the U.S. seems to believe that it is possible to control North Korea.

Iran, in contrast, is a regional power in the Middle East, and Iran’s nuclear weapons development may completely change the course of Washington’s Middle Eastern policy. Under the current policy, the U.S. manages the region based on its alliance with Saudi Arabia, whose strongest rival is none other than Iran. If Iran goes ahead with nuclear development, Saudi Arabia may follow suit, possibly jeopardizing stability in the region and raising oil prices to rattle the global economy. For these reasons, the U.S. is likely to continue to take a hard-line stance on Iran-related issues.

On July 1st, the Wall Street Journal pointed out that Trump has a limited number of tools when dealing with Iran compared to North Korea. That is, the American president communicates directly with the North Korean leader, while the strong U.N. sanctions against Pyongyang still have wide international support. On the other hand, it isn’t easy for the U.S. to control the nuclear activities of Iran, which could become the only economic and political stumbling block in the Middle East standing in the way of Washington.

After walking away from the 2015 Iranian nuclear deal, the Trump administration has tried to draw Iran and the international community to a new negotiation table. However, unlike North Korea, Iran isn’t very active about dialogue.

North Korea believes that it has completed its nuclear capabilities. Now it is seeking to get economic sanctions lifted through negotiations. In other words, the nation has entered the phase of managing the situation through dialogue.

In comparison, Iran may find it necessary to react against Washington’s withdrawal from the nuclear deal. But it is questionable if Iran will continue to confront the U.S. in the face of intensifying pressure. In the case of the North Korean nuclear issue, the crisis lasted for some time before shifting to the dialogue phase. Similarly, Iran and the U.S. could reach a reasonable compromise at some point, although there is currently a lot of tension between the two sides. With this possibility in mind, they may engage in a war of nerves for now.

Iran may learn a lesson from North Korea, which is seeking to improve relations with the U.S. through dialogue. North Korea-U.S. relations were extremely tense in 2017 when the U.S. put great pressure on the North and Pyongyang responded with a nuclear test and intercontinental ballistic missile launch. But they were able to find a breakthrough last year by holding a historic bilateral summit.

Although it is in a bitter confrontation with the U.S., Iran could follow in North Korea’s footsteps. However, if tensions between Iran and the U.S. continue, North Korea may change its attitude in its own negotiations with the U.S.

Whenever holding negotiations with the U.S., North Korea has claimed that the U.S. failed to implement previous agreements. This time as well, Pyongyang doggedly stressed the need for phased denuclearization as a sort of safety valve in case the U.S. refused to carry out their agreement. In this respect, the failed Iranian nuclear deal may negatively affect the nuclear negotiations between North Korea and the U.S.

I don’t think the denuclearization talks will find a comprehensive solution anytime soon. Pyongyang and Washington will be able to resolve the problem only after building mutual trust or making a bold decision. Before that, they will repeat the boring and grueling negotiation process. They will have to brace for protracted negotiations.

Following its unilateral withdrawal from the Iranian nuclear deal in May of last year, the U.S. reinstated economic sanctions on Iran. North Korea is concerned about this development. The clash between Iran and the U.S. will likely influence denuclearization talks between North Korea and the U.S., while Washington’s Iran policy is also expected to determine the course of relations between Pyongyang and Washington.