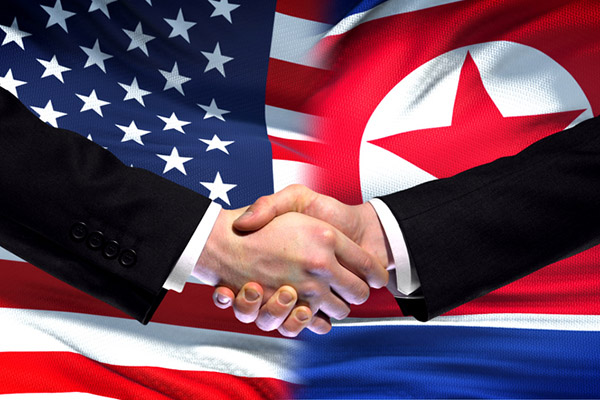 A flurry of preparations are underway for the second North Korea-U.S. summit, which will be held in the Vietnamese capital of Hanoi on February 27 and 28. Delegations from North Korea and the U.S. are now in Hanoi to prepare for the logistics and protocol of the summit, while other working-level officials from the two sides are busy fine-tuning topics to be discussed. Here’s Chung Dae-jin, professor at the Ajou Institute of Unification at Ajou University.

Working-level officials from both North Korea and the U.S. have arrived in Vietnam for logistics inspections and agenda discussions ahead of the second Kim-Trump summit. From North Korea, director of the State Affairs Commission Kim Chang-son(김창선) is playing a leading role in organizing Kim Jong-un’s ceremonial protocol.

Separately in Hanoi, U.S. Special Representative for North Korea Stephen Biegun and his North Korean counterpart Kim Hyok-chol(김혁철) are expected to coordinate the final points of the summit after a preliminary meeting between lower-level officials from the two sides.

White House deputy chief of staff of operations Daniel Walsh and Director of North Korea’s State Affairs Commission Kim Chang-son arrived in Hanoi on February 15 and 16, respectively, to inspect accommodations and the itinerary of their respective heads of state.

Prior to the summit, working-level negotiations are proceeding along the separate tracks of protocol and agenda. The protocol delegations from the two sides arrived in Vietnam more than ten days before the summit to prepare for the event.

Predictably, much attention is focused on the agenda. The two countries are expected to engage in a fierce tug-of-war over Pyongyang’s denuclearization measures and Washington’s corresponding action.

(It is still unknown exactly where Kim Jong-un will be staying. It has been reported that it is impossible to make reservations at five-star hotels in Hanoi at the present time. I guess North Korea has already set the leader’s schedule in Hanoi for the most part but it has yet to announce his accommodation as the North is highly sensitive about the leader’s security.)

It is speculated that Deputy Assistant Secretary for North Korea Alex Wong and vice chairman of the Korea Asia-Pacific Peace Committee Pak Chol(박철), both of whom are already in Hanoi, have taken steps to prepare for working-level negotiations between Stephen Biegun and Kim Hyok-chol.

In the meantime, Kim Chang-son, said to be Kim Jong-un’s de facto chief of staff, visited a Samsung smartphone factory in Vietnam on February 17 and Vietnam’s Foreign Ministry office on February 19. His tour in Hanoi offers clues as to where the North Korean leader may visit during his time there.

Judging from media reports, it is almost certain that Kim Jong-un will make a state visit to Vietnam. It will be the North Korean leader’s first state visit to a foreign country. He has traveled to China several times, but not on a state visit. I imagine North Korea hopes to use this great opportunity of highlighting Kim’s diplomatic activities and attempt to normalize the leader and the state.

Kim may fly directly to Vietnam, but it’s worth noting that a leading government official dropped by Guangzhou in China en route to Hanoi. While in Vietnam, he also visited the northeastern Lang Son province, which borders China, generating speculation that Kim may travel by train to Vietnam.

Reuters recently reported that Kim Jong-un would visit the Vietnamese manufacturing base of Bac Ninh during his state visit to the country. Many are wondering how the North Korean leader will travel to Vietnam and where he will visit in the country, but more attention is being paid to the ongoing negotiations over the agenda to be discussed.

Of course, the key topic will be the complete denuclearization of North Korea. The U.S. wants North Korea to take additional measures other than dismantling its Yongbyon nuclear complex.

It remains to be seen whether North Korea will agree on additional measures and what shape and form those measures may take. However, depending on Pyongyang’s response, the U.S. may adjust international sanctions on North Korea. For example, it may decide on whether to lift restrictions on North Korea’s imports of crude oil or whether to give a sanctions exemption to joint economic projects between South and North Korea. Working-level officials from Pyongyang and Washington will fine-tune those details in the remaining week before the summit.

Stephen Biegun and Kim Hyok-chol held three-day working-level talks in Pyongyang from February 6 to discuss the agenda of the summit. While the two officials explained their countries’ respective positions to each other in Pyongyang, they will likely work to narrow those differences during negotiations in Hanoi.

At their first summit in Singapore last year, North Korea and the U.S. agreed on four points, including the establishment of new relations between the two countries, building a peace regime on the Korean Peninsula and committing to complete denuclearization.

It was widely viewed as a vague and broad agreement, and the two sides are now in a position to work out the details.

North Korea and the U.S. set the basic framework for denuclearization during their first summit in Singapore last June. Now it’s time to get into the specifics and figure out how to actually implement the Singapore agreement. Many in the international community are expecting the two sides to narrow their differences and reach a satisfactory agreement at the Hanoi summit.

If the two sides end up striking a rather small deal, however, the entire world will question the usefulness of the summit. A small deal here might mean North Korea’s agreement to allow on-site inspections by outside experts of the Punggye-ri nuclear test site or the Tongchang-ri missile test site, and the expansion of humanitarian aid for the North in return. The remaining week ahead is a very important period to ensure a larger deal can be made.

Kim and Trump stand at a critical crossroads in the journey toward complete denuclearization of North Korea. What happens next hinges on the ongoing working-level negotiations between the two countries in the run-up to the summit.