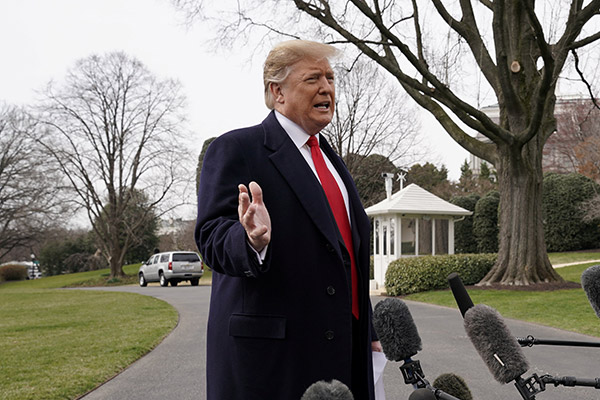 Both the U.S. and North Korea appear to be prodding each other after failing to reach an agreement in Hanoi last month. On March 21st, the U.S. Treasury Department imposed additional sanctions on the North, and just a day later, Pyongyang abruptly pulled its personnel from the inter-Korean liaison office in Gaeseong.

But on the 22nd, U.S. President Donald Trump said via Twitter that he had ordered the cancelation of additional sanctions, and the North Koreans then returned to the liaison office shortly after. Kim Geun-sik, Professor of Political Science at Kyungnam University, helps us break through these mixed signals.

Amidst a deadlock in relations between North Korea and the U.S. following the collapse of the Hanoi summit, North Korea wanted to apply some pressure to South Korea. While both Pyongyang and Washington want each side to make concessions, it appears that the former is trying to recruit Seoul to its side and pursue measures aimed at easing sanctions on the North.

Regarding the unilateral withdrawal of its staff from the Gaeseong liaison office, there was no official statement about the decision broadcast through state media channels, as is typical for these kinds of actions. Rather, the North simply notified the South of the decision. North Korea is discontent with Washington’s current attitude, but I don’t think Pyongyang expects its latest unexpected action to pressure the U.S. much.

After the failed Hanoi summit, North Korea has apparently restarted work at the Tongchang-ri missile test site, which it promised to dismantle last year. Activity has also been detected at the Sanum-dong missile research facility. Against this backdrop, the U.S. announced additional sanctions against the North on March 21, the first of their kind this year, in a bid to pressure the Kim Jong-un regime.

The following day, the North withdrew officials from the inter-Korean liaison office in Gaeseong, a recently-established symbol of inter-Korean trust building. It was Pyongyang’s first major move regarding its relations with the South since the Hanoi summit, and may indirectly reflect dismay at the proposed sanctions or irritation with the current stalement of denuclearization talks.

Following North Korea’s confrontational measure, Trump tweeted that he had ordered the cancelation of new sanctions on North Korea.

Basically, North Korean leader Kim Jong-un doesn’t want to abandon the talks completely because such an act will place a huge political burden on him. I imagine he is thinking deeply, and trying to read the intentions of the U.S.

Similarly, Trump doesn’t want to give up on negotiations with Kim altogether, even though he demanded that North Korea clarify its commitment to complete denuclearization and accept his proposal of a “big deal.” The American president remains unchanged in his previous position of maintaining or strengthening sanctions on North Korea, but he still doesn’t want the North to walk away from the negotiations. Trump may have felt the need to keep the negotiations going by appeasing Kim Jong-un.

Tensions seemed to be renewed between North Korea and the U.S. after Washington’s announcement of additional sanctions on Pyongyang and North Korea’s abrupt pullout from the inter-Korean liaison office. But Trump’s cancellation of the new sanctions seems to have kept things cool for now.

In fact, some North Korean staff returned to the liaison office earlier this week. Of course, it is uncertain how or if Trump’s reconciliatory gesture had anything to do with the liaison office. But if one thing seems certain, it is that both sides wish to keep momentum for dialogue afloat.

After Hanoi, North Korea and the U.S. have pursued both aggressive and conciliatory measures. Attention is now drawn to the next hand each side may play.

North Korea will convene the first meeting of the newly-elected legislators of the Supreme People’s Assembly in early April. Right before that, a full session of the Central Committee of the Workers’ Party or the party’s politburo meeting will be held to make decisions on the nation’s important policies.

For Kim Jong-un, it will be difficult to yield to all the demands made by the U.S. He has two options for now. First, he may halt negotiations with the U.S. for the time being and turn to Russia and China to buy some time. Actually, there are signs that Kim may seek summit talks with both Moscow and Beijing. Second, Kim may prod South Korean President Moon Jae-in into persuading Trump to review Washington’s North Korea policy. The North Korean leader is expected to make a decision related to these options in early April.

North Korea has in the past made major policy decisions at the full session of the Workers’ Party meeting, and the policies are approved by the Supreme People’s Assembly. Next month, Kim Jong-un may reaffirm his previous policy of seeking dialogue with the U.S. and South Korea, or announce a “new path.”

Indeed, Kim Chang-son, widely considered to be Kim’s de facto chief of staff, was dispatched to Russia recently, sparking speculation that he was laying the groundwork for a meeting between the North Korean leader and Russian President Vladimir Putin. In the meantime. Professor Kim speculates on Trump’s next moves.

Trump has solved a major domestic political problem, as it appears special counsel Robert Mueller did not conclude that Trump directly conspired with Russia during the 2016 elections. Therefore, Trump may feel emboldened to push forward with some of his policies and has renewed confidence in his bid for reelection next year.

After the botched Hanoi summit, the U.S. president may try to negotiate with the North Korean leader once again, if conditions are met. Progress in the North Korean nuclear issue may improve Trump’s chances of winning reelection. Thus I suppose he will maintain a tough stance towards North Korea publicly while keeping negotiations going at the same time.

Now that Trump has overcome a major domestic obstacle, he is expected to implement his North Korea policy with confidence, whether it is focused on dialogue or pressure.

As North Korea’s return to the inter-Korean liaison office came two days after Trump ordered the cancelation of new sanctions on the regime, some continue to maintain that the top-down approach is the correct way to handle the North Korean nuclear issue. Others, however, question the efficacy of such an approach after the Hanoi summit fell apart.

Regardless of what shape and form diplomacy between Washington and Pyongyang may take, analysts have noted possible behind-the-scenes contact between the two.

U.S. Special Representative for North Korea Stephen Biegun has recently visited Beijing. He is seeking to pressure North Korea through cooperation with South Korea, Japan and China. While Beigun was in Beijing, a senior North Korean official named Ri Su-yong(리수용) happened to arrive in Beijing on his way to Laos. It seems North Korea is considering contacting China and Russia as a new negotiation card in its denuclearization talks with the U.S.

It is unlikely that North Korea and the U.S. will make behind-the-scenes contact anytime soon, however, and I think the two countries will stay in a cooling-off period for some time, fine-tuning their own respective positions.

Ri Su-yong, head of international affairs for the Workers’ Party of North Korea, stayed one night in Beijing on March 26 and left for Laos early the next morning. During that time, Biegun was staying in the Chinese capital, fueling speculation that the two officials may have met, although it has not yet been confirmed.

The diplomatic community awaits the next moves of North Korea and the U.S. and hope for progress towards peace on the Korean Peninsula.