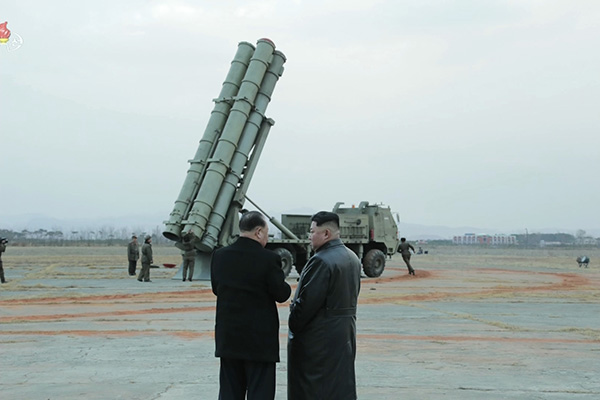 Anchor: A day after U.S. President Donald Trump raised the possibility of military action against Pyongyang, North Korea says it would be a “horrible thing” for the U.S. to do, threatening retaliation. The harsh rhetoric comes as Pyongyang's year-end deadline for a change in the U.S.’ denuclearization posture quickly approaches.
Choi You Sun has the details.

Report: North Korea's second-highest ranking military official said his country would quickly retaliate if the United States were to use military force against it.

The statement on Wednesday by Pak Jong-chon, chief of the General Staff of the Korean People's Army, came hours after U.S. President Donald Trump said that military action may be exercised against Pyongyang if necessary.

Pak said regime leader Kim Jong-un was "displeased" with Trump’s remarks and stressed that the only thing preventing physical conflict between North Korea and the U.S. is the close relationship between their leaders.

The official said the U.S. is not the only country that can use armed force and warned that it will be a “horrible thing” for the U.S. if it employs military action against North Korea.

As Pyongyang's year-end deadline for Washington to change its approach in their stalled denuclearization talks fast approaches, the two sides have been ramping up pressure on each other to extract more concessions.

On Wednesday, the North’s state-run media publicized multiple photos of Kim visiting the symbolically-important Mount Baekdu in an attempt to demonstrate Pyongyang's determined resistance against Washington.

Pyongyang also announced the Central Committee of the ruling Workers' Party will convene a plenary meeting later this month, where Kim is widely expected to present a detailed roadmap of the "new way" North Korea will go should Washington fail to pivot in an agreeable way by year’s end.

Meanwhile, U.S. Deputy Assistant Secretary of Defense for East Asia Heino Klinck said in Washington on Wednesday that the U.S. has never taken the military option off the table regarding North Korea.

Stressing the Pentagon has provided the space for diplomatic efforts to denuclearize the North by not responding to every single provocation, Klinck said there may come a time when that response may be different.
Choi You Sun, KBS World Radio News.