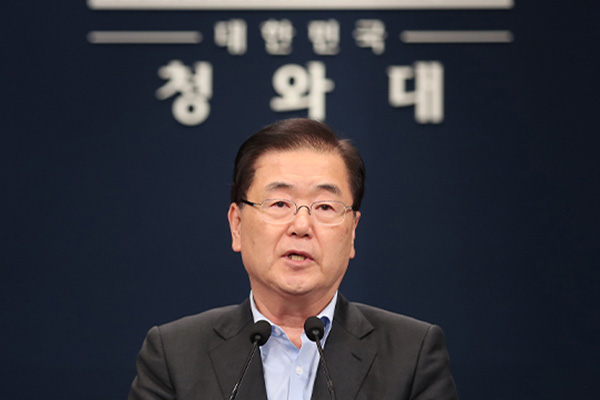 South Korea's presidential office said that it is strongly concerned by North Korea's launch of projectiles earlier on Tuesday.

The top office announced that an emergency National Security Council meeting was held at 8:10 a.m. shortly after the launches, presided over by Chung Eui-yong, chief of the presidential National Security Office.

In the meeting, which was facilitated by videoconferencing, the council expressed deep concern over the North's repeated test-firing of short-range projectiles since May.

The top office added that the council examined overall military and security conditions of the Korean Peninsula in response to the launches.

South Korea's military also said Tuesday that U.S. and South Korean intelligence authorities are analyzing the characteristics and flight patterns of the projectiles.

The firings came just hours after the North's First Vice Foreign Minister Choe Son-hui announced that the regime is willing to resume denuclearization talks with the U.S. in late September.

Tuesday's provocations were the North's tenth launch of projectiles this year, and the first in 17 days following its testing of a "new super-large" multiple rocket launch system on August 24.