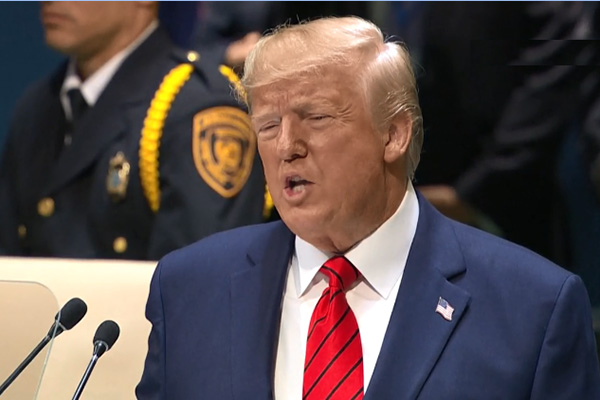 Anchor: U.S. President Donald Trump said on Tuesday that North Korea must denuclearize in order to tap its "tremendous" economic potential. Trump made the remarks in a speech at the UN General Assembly in New York ahead of the presumed resumption of working-level talks between Washington and Pyongyang.
Park Jong-hong has the details.

Report: U.S. President Donald Trump says that the U.S. does not believe in "permanent enemies" and that America wants partners, not adversaries in the world.

Speaking at the 74th session of the United Nations General Assembly in New York on Tuesday, Trump touted his administration's "bold diplomacy” on the Korean Peninsula as part of Washington’s pursuit of peace.

[Sound bite: US President Donald Trump (English)]
“America knows that while anyone can make war, only the most courageous can choose peace. For this same reason, we have pursued bold diplomacy on the Korean Peninsula."

The remarks come as Washington and Pyongyang are expected to resume working-level denuclearization negotiations in the coming weeks.

Noting that some of America's past enemies are now its closest friends, the U.S. president expressed confidence in a bright future for North Korea.

[Sound bite: US President Donald Trump (English)]
"I have told Kim Jong-un what I truly believe. That like Iran, his country is full of tremendous, untapped potential, but that to realize that promise, North Korea must denuclearize."

As Washington and Pyongyang prepare to resume working-level negotiations, Trump has suggested that a "new method" could help break the standstill between the two, but has not revealed details.

The U.S. president has also said he could meet North Korean leader Kim Jong-un again, although this would likely only occur if and when progress is made at working-level talks.
Park Jong-hong, KBS World Radio News.