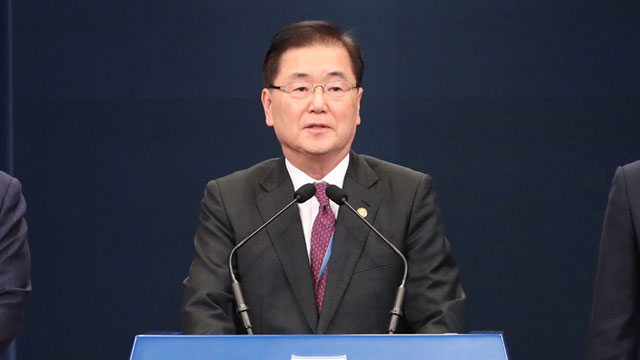 A top presidential official said on Sunday that the United States is trying "very hard" to convince North Korea to restart nuclear talks.

Chung Eui-yong, the chief of the presidential National Security Office, made the remarks during a joint press conference at the top office along with President Moon Jae-in's Chief of Staff Noh Young-min and chief policy secretary Kim Sang-jo.

The national security adviser said it's hard to predict when Washington and Pyongyang will resume negotiations but the U.S. is working aggressively to persuade North Korea to do so.

He said a third summit between the U.S. and the North will be held only if substantial progress can be made at working-level talks.

Chung said that the North emphasized the U.S. should present a "new calculation method" by the end of this year and that Seoul is keeping a close eye on the situation.

He added that South Korea is coordinating closely with the U.S. so that denuclearization talks can proceed smoothly and is preparing various contingency plans to execute.

Regarding a military information sharing deal with Japan set to expire November 22, Chung reiterated the government's position that it may reconsider its decision to terminate the deal if bilateral relations normalize.