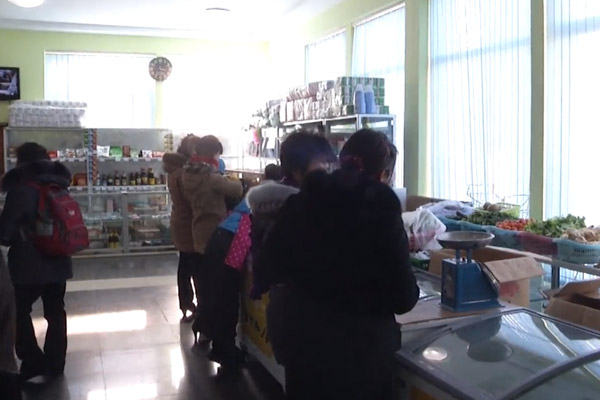 “Jangmadang,” meaning market grounds or marketplace, is one of the important words associated with North Korea these days. As the seeds of a market economy in North Korea, jangmadang have permeated deeply into the everyday lives of the North Korean people.

Today, we’ll talk about how and why private markets emerged in the communist state and how they are operated. Let’s hear from Cho Bong-hyun, vice president of the Economic Research Institute of the Industrial Bank of Korea.

In the past, the socialist economy of North Korea was operated under a centrally planned system and the public food rationing system. The government distributed all daily supplies to citizens and controlled their economic lives. But the public distribution system began to fall apart in the 1990s as North Korea’s economy deteriorated. After the food distribution system finally collapsed, ordinary North Koreans were forced to procure their own food and goods without depending on the state. Against this backdrop, markets began to pop up.

Before the 1990s, some unofficial farmers’ markets were present in North Korea. Food items that were not provided by state markets were traded at these market places in the event there was a disruption in the central distribution system.

However, private jangmadang-style markets were not known before appeared the mid-to-late 1990s, a period of severe economic contraction and famine known as the Arduous March. Food shortages resulted in the collapse of the public distribution system, forcing local residents to support themselves and subsequently giving rise to the jangmadang.

The North Korean people became increasingly dependent on private markets for their survival, and authorities had no option but to allow such transactions to continue. North Korea legally codified jangmadang markets in 2003 to allow for the trade of industrial products, spurring the growth of marketplaces nationwide.

From industrial products and food items to electronic goods, markets have it all. Computer-related items like USB sticks, wireless mice and keyboards, external hard drives and MP3 players are popular among North Korea’s youth. Some jackets cost 300 to 400 dollars. As the government tightly controls the circulation of foreign movies or videos, people often store them on USB sticks to watch them in an easier way. Little wonder those goods are selling well.

This is Chung Si-woo, a 20-something North Korean defector who escaped in 2017. As he said, markets in North Korea deal in a variety of things, ranging from food items, clothes, shoes, electronics, and more. Indeed, there’s a saying in North Korea, “You can find anything but a cat’s horn”, meaning if it exists at all you can find it at the jangmadang.

Goods produced by companies or individuals in North Korea usually go through four steps of distribution before reaching markets. Alternatively, people bring their products directly to markets and sell them directly. 80 to 90 percent of foreign goods in North Korea are from China. There are traders who officially import these goods, purchasing large quantities from Chinese distributers before handing them over to second-step traders.

The products are then delivered to third- and fourth-step dealers before finally reaching the market in the fifth and last stage. Some Chinese products are smuggled in to North Korea secretly and sold there at high prices. For traders, smuggling is a highly profitable business.

As Mr. Cho explained, products manufactured by factories or companies, agricultural and livestock products cultivated in individual gardens or local farms, private goods and traded goods between North Korea and China, including smuggled ones, flow into markets in the North.

Some traders buy goods in one region and resell them in other regions where the goods are in short supply, while some wholesale dealers use vehicles or trains to carry things to different regions and sell them to merchants or consumers directly. Here again is Mr. Chung.

Anyone can sell things in markets, but they have to pay fees. A good location in the market brings in customers, just like restaurants and shops in South Korea. Of course, the best location is more expensive than other sites. But typically, those who want to secure a particular location must pay some 100 dollars up front. In addition, they’re also supposed to pay a certain amount of operating fees every month.

In general, a marketplace approved by North Korean authorities refers to a building constructed on a large, empty lot. Inside, vending stalls are set up and merchants pay fees for using the stalls. Each marketplace has its own management office operated by the government, and the office sets rules governing stall fees.

A 50- 60-centimeter stall is allocated to each merchant after he or she pays stall fees. But the sellers cannot occupy particular stalls forever. If they want to continue to remain in stalls with good locations, they have to pay a certain premium. In North Korean markets, sellers and buyers alike prefer foreign money to the local currency. Mr. Chung continues.

Typically, when customers pay with US cash, they hold rolled-up banknotes in their hands and covertly hand them off to a seller as if they were shaking hands with each other. The dealer unfolds the bills to ensure the proper amount was paid before handing a product over to the customers. Customers and merchants cannot give and take dollars explicitly when trading goods, as the government controls dollar transactions, at least in principle. But there are people who exchange the North Korean won for dollars at the market.

In 2009, North Korean authorities introduced currency reform that redenominated banknotes at a ratio of 100 to 1. The purpose of the revaluation of the local currency was to rein in the market economy that was expanding too fast for the central government’s liking.

But the plan backfired. Public sentiment was particularly negative and inflation was rampant. Authorities soon relented and, as a result, foreign currencies found their way to the jangmadang.

Markets continue to proliferate across North Korea. According to the Korea Institute for National Unification, there were 404 jangmadang in total in North Korea in 2016. The entire market area was about 1.83 million square meters and the total number of vending stalls in the markets exceeded 1 million. The markets employed more than 1 million people, or about 5 percent of the entire population of the country. Mr. Cho says that markets are, in effect, driving the North Korean economy.

The jangmadang markets have become a key part of the North Korean economy and every life for the people there. Both a planned economy and a market economy exist side by side in the country. Currently, North Korea has some 500 official jangmadang. But when unofficial, smaller ones are included, the number is estimated to reach as many as 5,000.

In line with the growth of private markets, many North Koreans generate sufficient income and create wealth. Markets not only enable them to earn a livelihood but also give them hope that they can now make money and even become rich. In this sense, markets are extremely valuable to North Koreans. Their whole lives revolve around the markets. Markets are an important and precious economic base, through which they can see hope for the future.

Analysts point to the jangmadang as the reason why North Korea can sustain its economy despite strong international sanctions on the North. As we see, private markets now form a vital axis of the North Korean economy.

Next time, we’ll talk about how the markets have been transforming North Korean society.