Status of Women in N. Korea 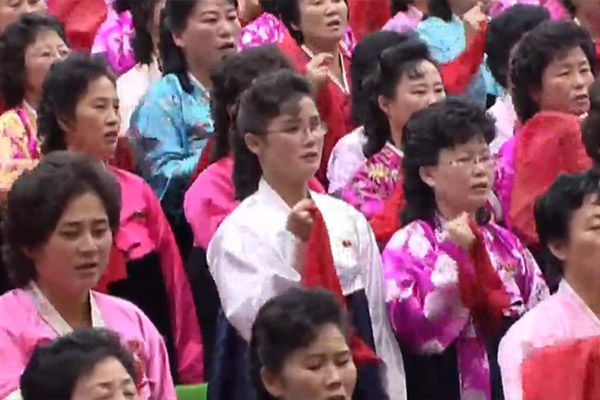 Today, we’ll learn why this day is celebrated in North Korea, which is infamous for its human rights abuses, and how women are treated in the nation with Professor Chung Eun-chan at the Institute for Unification Education.

In general, International Women’s Day serves to remind us of the importance of gender equality and women’s rights. But North Korea observes the day in a rather idiosyncratic way. On International Women’s Day, North Korean women gather at factories, companies or villages to share food and enjoy various activities amongst themselves. Men, meanwhile, rise early in the morning to cook food or prepare gifts or flowers for their wives in appreciation of their hard work. On the political front, the party convenes a briefing session to mark the occasion every year.

On March 8 this year, the party will mark the anniversary of North Korea’s own version of International Women’s Day by holding a central briefing session. Various organizations, including the Socialist Women’s Unions of Korea, hold their own events dedicated to women during the day, while at night, many women participate in commemorative events and parties hosted by their provinces, cities or counties. On this day, men cook and clean for the women.

North Korea’s birthrate is rather low, though still higher than South Korea’s. Many women in the North are reluctant to raise children. Indeed, mothers of seven or more children are given the title of “maternal heroine.” Of course, the title is seen as part of the government’s efforts to promote childbirth. Women who have made great contribution to their workplaces also receive prizes on this day.

North Korea promulgated a gender equality law in 1946. The law is supposed to guarantee women’s right to vote and eligibility for election, opposes forced marriage and prostitution, and recognizes women’s right to divorce and to sue for child support. In 2010, the law was strengthened with more specified provisions, including gender equality in inheritance of property, a ban on domestic violence and a prohibition on layoffs on the grounds of marriage, pregnancy and maternity leave.

In reality, however, women face significant obstacles to equality in North Korea.

North Korean law stipulates that women have equal rights with men in wages, labor and social positions. But that’s not the reality for most women.   North Korea’s Supreme People’s Assembly, which is equivalent to the National Assembly in South Korea, has about 687 representatives. At times in the past, greater than 20 percent of them were women, but the figure has slid to 18 percent now.    In workplaces nationwide, women rarely earn equal pay for equal work with men, meaning that women are still being discriminated against based on their gender.

The social positions of North Korean women are not at all comparable to their male counterparts, though there are a few rare exceptions.

Kim Yo-jong, the younger sister of North Korean leader Kim Jong-un and also first vice director of the Central Committee of the ruling Workers’ Party, has exercised outsized influence in her brother’s summit diplomacy. There’s also Choe Son-hui, former director-general of the North American affairs bureau at the Foreign Ministry, who has reportedly been promoted to the vice foreign minister, and is a representative North Korean female diplomat.

However, there are very few North Korean women who actually engage in diplomatic activities on the international stage. There are no female diplomats working at the U.N. from North Korea, for example.

In many homes dominated by a strong tradition of patriarchal values, women are mostly relegated to household chores and child rearing. Many women in North Korea face a tough reality, in stark contrast to national rhetoric that says women are the flowers of the home and society.

North Korea often uses the word “flower” when referring to women. There is even a popular song titled “Women are flowers.” Women are described as the flowers of homes, life and society.

However, since the breakdown of the North’s public distribution system in the 1990s amidst severe economic contraction, many women have shouldered the burden of supporting their family financially, in addition to home and child care, as many men went without pay from their state-run workplaces.

After the so-called Arduous March period in the 1990s, North Korea’s state rationing system, in effect, collapsed, forcing many housewives in North Korea to work in private markets called jangmadang while they still took care of children at home.

The status of North Korean women has been elevated as markets increasingly become the driving force behind the domestic economy.

North Korean women have expanded their private economic activities in the markets, accumulating wealth in the process. Naturally, their status has gradually improved and, in many cases, they played a greater role in supporting the family than do men.

North Korean men may realize that they cannot maintain a happy family if they cling to traditional patriarchal values. Pragmatically, many men now try to be more flexible and eager to change their conventional attitude. As outside information, especially South Korean cultural content, flows in to the reclusive country, some North Korean men have even modeled their behavior on South Korean men in many things. Clearly, traditional ideas about gender roles are changing in the North.

As more and more North Korean women enhance their economic power, they have a bigger say in the home as well. Under Kim Jong-un, in particular, the nation has promoted International Women’s Day in a big way. Various TV programs in North Korea praise working mothers and actively encourage women to engage in economic activities.

Clearly, North Korea stresses the positive role of women in society and attaches great significance to International Women’s Day. But Professor Chung explains that such moves may be aimed at alleviating outside criticism of North Korea’s dire human rights situation and strengthening internal unity.

North Korea stresses the importance of women in society for both internal and external purposes. Outwardly, the North publicizes its policy of boosting gender equality based on state ideology that calls for equality between men and women. By celebrating International Women’s Day, North Korea wants to show the outside world that it promotes women’s rights. Women, who account for about half of the population, are becoming more influential in both the home and workplace in North Korea.

As women become leaders of social development, they can play an important role in bolstering internal solidarity. The communist North also tries to highlight a commitment to ensure women are taken care of as many may be characterized as socially vulnerable.