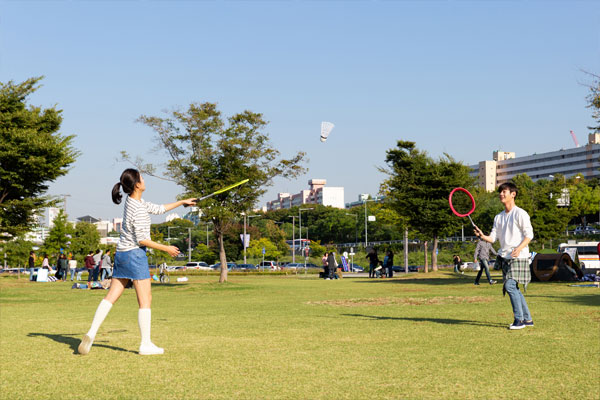 “Sports for all” or “leisure sports” in South Korea are expressed differently as “public sports” in North Korea. In the North, the state encourages its people to exercise. Local residents gather in twos and threes to engage in some physical activity, and workers at enterprises exercise together. In the North, such activities are called “public sports.”

In both South and North Korea, ordinary citizens engage in sport activities to relieve stress and keep themselves in good health. But South Koreans enjoy a variety of such activities of their own free will, while North Korean individuals participate in the state-led public sports in a restricted way.

According to a 2020 survey about South Koreans’ sports activities in daily life, 45 percent of respondents cited “maintaining and promoting health” as the biggest reason for doing such activities, followed by making good use of spare time, watching their weight and body shape, and beating stress. The survey also found that the most popular physical activity was walking, with 42 respondents saying so. It turned out that South Koreans enjoy various other activities, including hiking, body building, soccer, yoga, Pilates, bicycle riding, swimming, gymnastics, golf and billiards.

North Korea’s constitution stipulates that the state should get all the people well prepared for labor and national defense through physical training. North Koreans should use their improved physical strength for the state. Article 17 of the Physical Culture and Sports Law defines public sports as physical activities aimed at improving the physical fitness of workers at institutions and enterprises. Local residents gather for public sports activities designated by the state, including morning exercise and group running. Students are required by law to learn at least one sport in school. Major media outlets and some YouTube channels in the North are saying that popular public sports include Pilates, horseback riding, squash and pocket ball. But in reality, these are only for particular groups of people, including foreigners.

Video footage that was filmed secretly by foreigners shows that those activities are rarely found in the country. But it is common to see locals gather in small groups and perform simple calisthenics.

North Korea has marked the second Sunday of every month as a national sports day since 1992 under the instruction of former leader Kim Jong-il. Through the monthly event, North Korea stresses the importance of increasing physical strength and collectivism.

Socialist states in Eastern Europe collapsed from the late 1980s to the 1990s. Amid the major transition, North Korea underlined group activities to maintain its own socialist system. As part of efforts to gather a large crowd, the country designated the second Sunday of each month as a national sports day in March 1992. On the occasion, officials of central government agencies gather in wide areas, including Pyongyang’s Kim Il-sung Square for a group run, gymnastics, a tug-of-war, basketball or volleyball. North Korean media outlets report that almost all workers participate in the events marking the national sports day. But it is questionable whether the report is true. Media agencies often report about such events for workers in big cities like Pyongyang, but it is difficult to confirm media reports about monthly sports activities in outlying areas or in regions where groups are loosely organized.

A North Korean propaganda outlet has recently introduced a story that leader Kim Jong-un, who was working till past midnight, suggested to officials that they play table tennis or badminton together and actually did so. The leader was quoted as saying that those sports are very good for getting into shape and recovering from fatigue.

North Korea has placed greater emphasis on public sports since the current leader came to power. At the eighth congress of the Workers’ Party in January this year, North Korea set a goal of joining the ranks of sports powerhouses by putting sports on a scientific basis and developing sports industries.

Former leader Kim Jong-il inspected sports-related sites only 20 times during a span of 16 years. Current leader Kim Jong-un, on the other hand, took as many as 67 field inspection trips to sports-related areas for three years starting 2012. That’s a big contrast. North Korea’s Masikryong Ski Resort was completed just a year after the current leader took power. Due to the top leader’s keen interest, the country has built various cultural and sports facilities quickly. Also, the Sports Guidance Committee was renamed the State Sports Guidance Committee, with its status elevated. Consisting of high officials, the new organization swiftly figures out the leader’s intention and quickly executes relevant projects to produce various visible results.

Under Kim Jong-un’s rule, slogans like “sports fever” and “sports powerhouse” have frequently appeared in North Korea, with public sports developing fast. In the most substantial outcome, the North has expanded infrastructure for public sports by building sports facilities in cities nationwide, including Pyongyang, in line with its policy goal of building a civilized, socialist country.

In the Kim Il-sung era, sports were mostly about national defense. During the years of Kim Jong-il, group sports activities were considered important to strengthen the collective, socialist system. In the past, people had to exercise under surveillance. But in the current Kim Jong-un era, sports have featured more entertaining elements that people can enjoy. North Korea has built or renovated various sports facilities, including outdoor ice rinks, roller skating rinks, the Rungna People’s Sports Park, Pyongyang Gymnasium and the Munsu Water Park.

Previously, North Koreans took part in athletic activities in groups in a large square. But public sports have now become something fun and amusing for everyone to enjoy.

North Korea held a general assembly of its Olympic Committee in March. At the meeting, North Korea stressed the need to increase the number of medals to be won at international competitions during the period of a new five-year plan and to boost the sports fever nationwide.

To produce good results at international sports events, it is essential to make a massive investment. Unfortunately, North Korea suffers from economic difficulties for various reasons, including international sanctions. It remains to be seen what kinds of pragmatic solution the country will show in order to become a sports powerhouse.