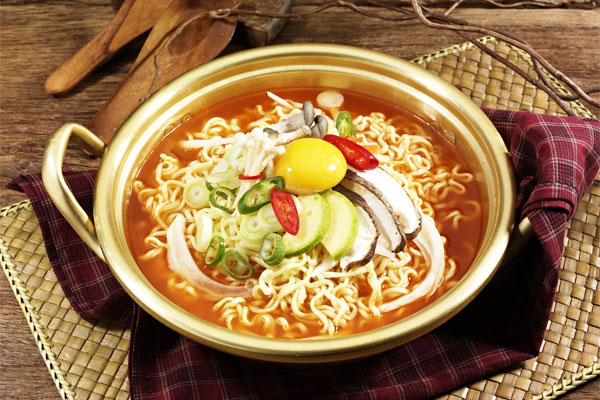 “Put 550 milliliters of water in a pot and boil it. Add soup base and noodles to the boiling water and wait for another four and a half minutes.” This is a typical recipe written on a pack of South Korean instant noodles called ramyeon. Ramyeon was first manufactured in South Korea in 1963. Each South Korean citizen eats 70 to 80 servings of ramyeon annually, meaning that people consume a bowl or ramyeon more than once a week. Flavors of ramyeon vary, including spicy, seafood and beef, and there are ramyeon variants such as black bean noodle ramyeon, cold and spicy ramyeon without soup and spaghetti ramyeon. Noodles themselves are different, in terms of thickness and texture.

Ramyeon is called “curly noodle” in North Korea. In the late 1970s when I was a middle school student, North Korea provided white rice and grains to people through the state rationing system. Mothers preferred corn noodles to corn because the noodles were bloated when they were boiled and then put in cold water for 30 minutes. The swollen noodles were enough to feed a family of four. One day, the “curly noodles” were given to households. The noodles were not fried and there was no broth powder. They were not softened, either. But they were much more delicious than homemade chopped noodles. I ate curly noodles for the first time. As a young girl, I gobbled down the new food, not even caring whether my parents were eating or not.

Ramyeon first appeared in North Korea in the 1970s, when instant noodles began to be produced at a flour processing factory in Pyongyang. Ramyeon was called “curly noodle,” which was different from conventional noodles in terms of shape.

At the time, the instant noodles were packed in boxes, not in individual packets, and supplied to just a few regions, including Pyongyang. As the noodles did not include any soup powder, people would boil and ate them with an array of toppings. Ramyeon that South Koreans eat today was produced in the North beginning in the 2000s. North Koreans call ramyeon instant noodles.

North Korea began to manufacture instant noodles after 2000. The country experienced severe economic difficulties from the mid-1990s to the early 2000s, and the Pyongyang instant noodle factory was established based on capital from Hong Kong. At the time, the factory produced 10 tons of noodles per day. The amount was extremely small, representing a mere 0.08 percent of North Koreans’ daily food consumption of 12-thousand tons. Even so, North Korea’s first production of fried noodles with a soup powder did show a change in the regime. I never tasted the instant noodles in North Korea, as I came to South Korea in 2002. While living in the South, I’ve eaten North Korean snacks including candies and chocolates as well as North Korean coffee and ramyeon that arrived in South Korea via China. I found that North Korean noodles were easily cut and the soup powder was not very tasty. They were less greasy than South Korean ones. Still, I thought they were pretty good.

After the 2000s, various kinds of foreign ramyeon products flowed into North Korea through China and the inter-Korean joint industrial complex in Gaeseong. They spread throughout the country through private markets or jangmadang. It is said that South Korean ramyeon products enjoyed great popularity.

The Gaeseong Industrial Complex started operation around 2005. South Korean manufacturers there provided ramyeon as well as Choco Pie snacks to North Korean workers at the complex.

Cup noodles are even simpler and more convenient, as users can just pour boiling water into the noodles in the cup. North Korea has developed various kinds of ramyeon containers to produce this type of cup noodles.

North Korea calls cup ramyeon “instant dish noodle”. It shows that ramyeon containers have been diversified in the country. When eating packet ramyeon, users have to boil the noodles in a pot and wash the pot after eating. But they don’t need to boil the instant dish noodles but simply pour hot water into the plastic cup or container. After eating, they may throw away the container or recycle it. Even cold water works for some instant noodles. In that case, users don’t even need hot water so they can enjoy ramyeon conveniently and save fuel costs as well.

People have diverse tastes for ramyeon. Some choose to exactly follow the recipe indicated on the ramyeon pack, while others add other stuff like green onion, egg, dumpling, kimchi or seafood. Various ramyeon recipes are introduced on the Internet or TV programs, and many people have their own unique method to make delicious ramyeon. Researcher Kim now explains how the instant noodles are enjoyed in North Korea.

Many North Koreans enjoy ramyeon as an excellent side dish for drinks, like special food consumed on traditional holidays. They add eggs or mushrooms to the dish. Wealthy people put beef slices in it. But in general, a lot of vegetables are boiled together. I think this is the way to add more flavor to ramyeon and make eaters feel full and satisfied.

North Korea does not produce a large amount of ramyeon, and the ramyeon prices are expensive. So, ordinary citizens eat the food only on special occasions. We hope the country will produce delicious and affordable ramyeon products in large quantities so all local residents will feel free to enjoy the instant noodles.