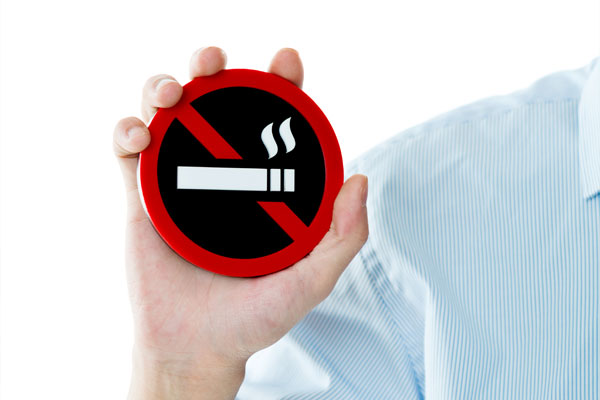 In South Korea, people haven’t seen any smoking scene on TV since the early 2000s, because such scenes might awake a desire for smoking.

How about North Korea? It is said that the North enacted an anti-smoking law in November last year, staging an intensive campaign against smoking. Today, we’ll learning about North Korea’s anti-smoking activities from Kim Young Hui, senior researcher from the Korean Peninsula New Economy Center at the Korea Development Bank.

In North Korea, most men smoke and drink when they grow up. Those who do not smoke and drink are not even considered to be men. They make excuses whenever they puff cigarettes. For example, they need to smoke when they are lost in meditation or when they are bored. Most men have ashtrays at their homes and offices, and they take it for granted that they smoke cigarettes in front of women.

My father, too, would light up every day, although he was a doctor, and my house would be filled with cigarette smoke. It is common to see smoking scenes in North Korean art films. Men sit smoking together to show that they are close to each other. Smoking is so widespread among North Korean men, and I doubt that the practice will change easily.

In North Korea, cigarettes are more like one of daily necessities, rather than an item of personal preference. Some are even said to place cigarettes on a ceremonial table for their ancestors. It was in the early 2000s when the wind of “anti-smoking” began to blow in the country.

Former leader Kim Jong-il, who was a heavy smoker, attempted to quit smoking in the early 2000s. At the time, people who had no sense of music, who were computer illiterate and who smoked were called three stupid idiots. North Korea highlighted the harmful effects of smoking, in particular, putting up no-smoking posters reading “A cigarette is a gun aimed at the heart.” But the leader’s attempt to stop smoking failed.

In 2005, the standing committee of North Korea’s Supreme People’s Assembly introduced the “Tobacco Control Law” that prohibits smoking in public places, including hospitals, clinics, trains and buses. The country also established an anti-smoking research center and developed programs to help people stop smoking. It is said that cigarettes carry a special meaning in the North.

So, why can cigarettes solve almost everything in North Korea? Bribes, in many cases, are given in the form of money. In the North, giving cigarettes is an act of expressing or sharing affection, since it is common for men to share cigarettes, which are not considered bribes. After the severe economic difficulties in the mid-1990s, cigarettes came to function as money as they could be exchanged into money at the market.

Women, if they smoke, are considered to be unprincipled people who have totally given up on their lives. In the North, female smoking is an absolutely immoral act, while male smoking is a symbol of men’s authority and superiority. In a word, tobacco consumption is not culturally acceptable for women in North Korea.

Since the enactment of the Tobacco Control Law in 2005, North Korea has continued to strengthen regulations concerning smoking. The revision of the law in 2019 restricted the import of foreign-made tobacco and banned people from using electronic cigarettes and smoke-free ones as well. No-smoking areas have been expanded at public places and buildings, while no-smoking stickers have been put on the walls of companies and residential areas, making it difficult for smokers to light up.

However, the anti-smoking movement was not as effective as expected. In November 2020, the Supreme People’s Assembly adopted the “Tobacco Prohibition Law” to reinforce the Tobacco Control Law. The new law further tightens controls on the production and sale of cigarettes as well as on smoking.

The Tobacco Prohibition Law consisting of 31 articles designates public places, childcare centers, medical facilities and public transportations as no-smoking zones. The law applies to foreigners in North Korea, as well as local institutions, enterprises and citizens. It bans cigarette sales for teenagers, and cigarette packs have messages warning of health risks of smoking. The law also forbids the import and sales of any decoration, toy or foodstuff associated with the image of smoking. Violators are subject to fines or legal punishment.

Many North Korean men take a drag on their cigarette regardless of time and place, and many local residents suffer from decreased lung function as a result of secondhand smoke. They are constantly exposed to cigarette smoke. It is little wonder that the number of patients continue to rise. Against the backdrop, the strong anti-smoking law was introduced.

Since the introduction of the Tobacco Prohibition Law, North Korea has put greater emphasis on the need to quit the harmful habit. Local media outlets have promoted the anti-smoking research center and released a series of articles on the anti-smoking law.

The anti-smoking research center is dedicated to providing information about anti-smoking and publishing relevant papers and books. It also produces treatments for tobacco dependence and develops health food as well.

A nicotine replacement supplement called “nutritious egg” is made of natural herbs. It is believed to help people quit smoking and also improve the immune system. It’s been over ten years since the tablet was developed but it is still popular. Other aids to help people stop smoking include nicotine badges that can be applied to the skin like a Band-Aid, beverages made of medicinal herbs, and teas. Like this, North Korea actively carries out anti-smoking measures and campaigns in an apparent move to follow the international trend of calling attention to the negative effects of smoking.

Media agencies often release the scenes of North Korean leader Kim Jong-un carrying a cigarette in public. The BBC introduced North Korea’s Tobacco Prohibition Law and analyzed that the leader, a heavy smoker himself, might have a negative influence on the country’s anti-smoking movement. Even after the passage of the law, Kim actually appeared on media with his cigarette and he was also seen next to an ashtray.

Kim Jong-un smokes so heavily that his wife Ri Sol-ju was seen on media expressing concerns about her husband’s habit. Perhaps, North Koreans believe that their dear leader is an exception, as he is different from ordinary people. But if the top leader shows to his people that he is attempting to quit smoking, smokers in the country will be eager to follow suit. I think more than half of male smokers will be able to kick the habit.

North Korea is focusing its energy on anti-smoking efforts once again, as evidenced in the new law. But any campaign against smoking will end up being an empty sound, unless corruption and illegalities are eradicated in North Korea, where cigarettes are, in effect, used as bribes.