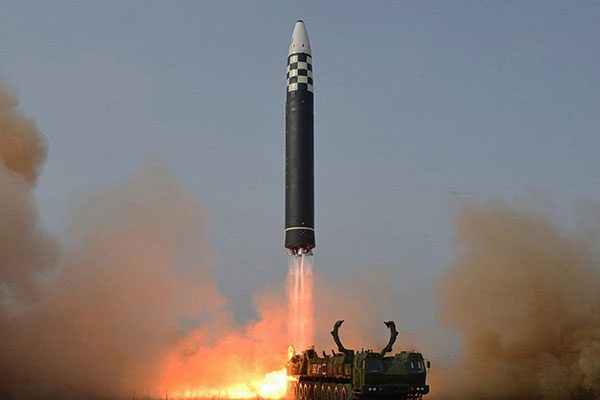 North Korea said it test fired its new type of intercontinental ballistic missile, the Hwasong-17, on Thursday under the direct guidance of leader Kim Jong-un.

The North's official Korean Central News Agency(KCNA) said on Friday that Kim issued a written order on Wednesday to conduct the test and visited the launch ground to personally oversee the complete test-launch process on Thursday.

After the launch, Kim reportedly said that the new strategic weapon of the country would make the world clearly aware of the power of the North's strategic armed forces once again.

He stressed that the country and the party remain firmly committed to strengthening its "nuclear war deterrence" position to prepare for any crisis and to preserve the nation's safety.

Kim said his country would continue to focus on bolstering its defense capabilities, pledging to fully prepare for a long confrontation with the U.S. imperialists.

The KCNA said the missile, launched at Pyongyang International Airport, traveled up to a maximum altitude of six-thousand-248-point-five kilometers and flew one-thousand-90 kilometers for four-thousand-52 seconds before accurately hitting the pre-set area in open waters in the East Sea.

President Moon Jae-in said that North Korea's missile launch clearly violates the self-imposed moratorium on ICBM tests that Kim had pledged to the rest of the world.

The presidential office conveyed Moon's remarks made from an emergency National Security Council(NSC) meeting that the president presided over Thursday afternoon.

The presidential office said that President Moon strongly condemned North Korea's missile launch, saying that it not only threatens the Korean Peninsula, the surrounding region, as well as the international community, but also is a clear violation of the United Nations Security Council Resolutions.

During the meeting, Moon called for close cooperation with related countries and the international community during this transitional period, and also called for authorities to cooperate with the president-elect.

Following the ICBM launch, the South Korean military responded with its own missile tests from the air, land and sea.

The South Korean military explained that some of its key missiles launched on Thursday afternoon demonstrate its commitment and capability to immediately respond in kind to any provocation.

Military authorities stressed that they are capable enough and stand ready to precisely strike the staging area for North Korea’s missile tests and relevant command and support facilities. They condemned North Korea for rejecting dialogue with the international community and pressing ahead with an ICBM launch, describing it as a grave challenge to the South Korean military and the ROK-U.S. alliance.