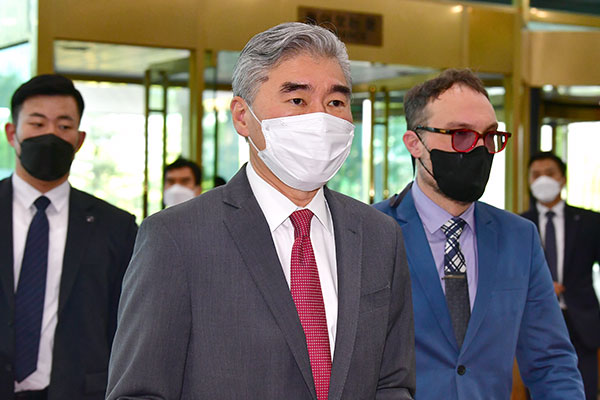 The top nuclear envoys of South Korea and the United States have agreed that their countries will jointly and sternly deal with additional provocations out of North Korea, including a possible nuclear test.

Special Representative for Korean Peninsula Peace and Security Affairs Noh Kyu-duk briefed reporters on Monday on the outcome of his talks with his U.S. counterpart Sung Kim… who was in Seoul for meetings with relevant officials from both the outgoing and incoming governments.

Noh said the situation on the Korean Peninsula was judged to be entering a crucial phase, adding he and Kim shared concerns that it is likely the North’s tension-hiking behaviors will continue.

The South Korean official said the two sides agreed to strongly respond at the UN Security Council level based on a firm joint defense posture should the North continue to violate UNSC resolutions, be it via a nuclear test or an intercontinental ballistic missile launch.

U.S. envoy Kim said he and Noh agreed on the need to maintain the strongest joint deterrence on the Korean Peninsula, mentioning the South Korea-U.S. springtime military exercise, which kicked off earlier in the day.

Stressing the frequency of their meeting, the second of its kind in two weeks,

U.S. Special Representative for North Korea Sung Kim also held a closed-door breakfast meeting with Kim Sung-han, head of the presidential transition team’s foreign policy subcommittee, on Thursday. He is considered to be a strong candidate for Yoon’s national security advisor. Kim also met with Yoon’s unification minister nominee Kwon Young-se later in the day, during which the two officials exchanged views on security conditions on the Korean Peninsula and global politics as well as the incoming administration’s North Korea policy review and direction.

During a meeting with Foreign Minister nominee Park Jin on Wednesday, Sung Kim said that the Biden administration has high expectations for close cooperation with the incoming Yoon government and will put top priority on bilateral cooperation given the grave security concerns on the Korean Peninsula.

With less than 20 days to the end of President Moon Jae-in's tenure, it came to be known that the leaders of South and North Korea have exchanged what will be their last round of letters in their official capacities.

According to the presidential office on Friday, Moon wrote in the letter sent on Wednesday that he remembers the past five years of South-North relations as a mix of regret and emotion-filled moments.

He said progress in inter-Korean dialogue was not as expansive as he had wished, but added that he is certain that he and Kim took the first step to change the fate of the Korean Peninsula.

Saying the task of pursuing talks is now up to the incoming government, Moon called for overcoming the times of confrontation with dialogue and expressed hope for Pyongyang to swiftly resume talks with Washington.

According to North Korean state media, Kim Jong Un replied on Thursday that while inter-Korean relations have not developed as much as they had desired, the two sides issued historical agreements and declarations. He said relations will improve if the South and North work tirelessly together.