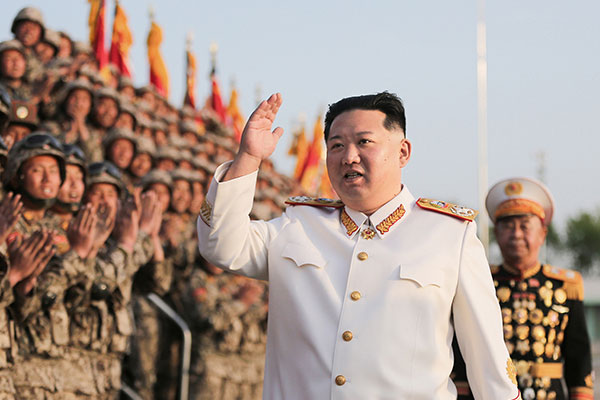 According to the South Korean military, the North kicked off the parade at around 10 p.m. after a pre-parade ceremony to mark the 90th founding anniversary of the Korean People's Revolutionary Army.

It marks the 12th time that the North staged a military parade since Kim Jong-un took power in 2012.

Tens of thousands of military personnel and citizens reportedly participated in the parade.

According to South Korean military and intelligence authorities, the parade was the largest-scale event to date, based on satellite imagery that showed about 250 pieces of equipment mobilized for rehearsals.

In addition, North Korea is thought to have displayed its newest weapons in the parade, including the Hwasong-8 hypersonic missile, Hwasong-17 intercontinental ballistic missile and a submarine-launched ballistic missile.

During the anniversary parade, Kim resolved to further bolster his country's nuclear force. He pledged to take steps to enhance the development of the regime’s nuclear capabilities "at the fastest rate." He said that while such power is a deterrent against aggression, its nuclear weapons cannot be limited to a preventative role in case the nation is threatened.

Kim warned that any force seeking military confrontation will cease to exist, saying that the regime is "thoroughly prepared" to carry out its mission of nuclear deterrence at any time.

Kim's remarks come amid heightened tensions following the North's series of missile tests, including the launch of an intercontinental ballistic missile(ICBM) last month.

Following the parade, Rodong Sinmun, the official newspaper of the North's ruling Workers' Party, praised Kim in a report released on Wednesday.

The report said the North exists today thanks to Kim, with his genius foresight, remarkable leadership and incomparable courage.

The paper also described the outfit Kim wore to the military parade as “head-of-state attire,” reaffirming that Kim’s rank remains “head of state.”

Meanwhile, Washington has reiterated its dual-track policy of diplomacy and sanctions toward North Korea.

Stressing that the goal of complete denuclearization of the Korean Peninsula remains unchanged, he said Washington harbors no hostile intent toward Pyongyang and is open to diplomacy and dialogue.

However, the spokesperson said the U.S. is also obliged to enforce UN Security Council resolutions on the North and will closely cooperate with regional allies and UN partners on the matter, reaffirming that the U.S. commitment to the defense of South Korea and Japan remains ironclad.

In addition, the unification ministry in South Korea has urged North Korea to stop escalating tensions and return to dialogue.