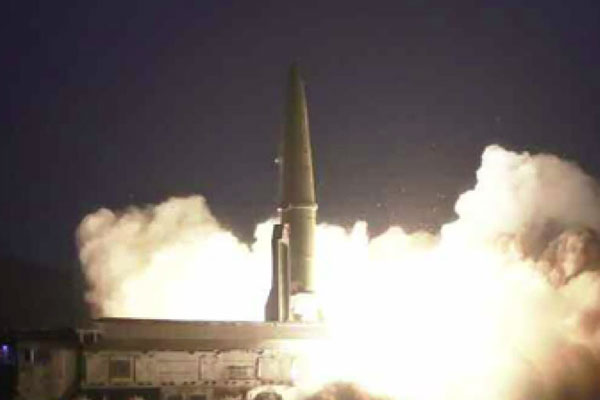 The Joint Chiefs of StaffJCS) said Tuesday that North Korea fired two projectiles into the East Sea from in the country’s southwest early Tuesday morning.

The JCS said that the projectiles are estimated to be short-range ballistic missilesSRBM).

The SRBMs flew some 450 kilometers east across the Korean Peninsula before splashing down into the East Sea, reaching an altitude of 37 kilometers and a top speed of Mach six-point-nine.

The JCS added that South Korean and U.S. authorities have assessed that these short-range missiles share similar flight characteristics to the ballistic missiles North Korea fired on July 25.

The regime had earlier fired projectiles on July 25, July 31 and August 2.

The launches seemed designed to demonstrate hostility to joint military drills by South Korea and the U.S., which effectively kicked off Monday.

North Korea's Foreign Ministry issued a statement after the launches Tuesday, claiming that the joint exercise is a drill “to start .”

It threatened that it would have to seek a “new road” if the two allies continue ignoring Pyongyang’s repeated warnings to desist.

The August joint military exercises are a scaled down version of an annual iteration of drills between South Korea and the U.S. and are mostly computer-based.

They are aimed this year at examining Seoul's capability for the envisioned transfer of wartime operational control of its troops from Washington.