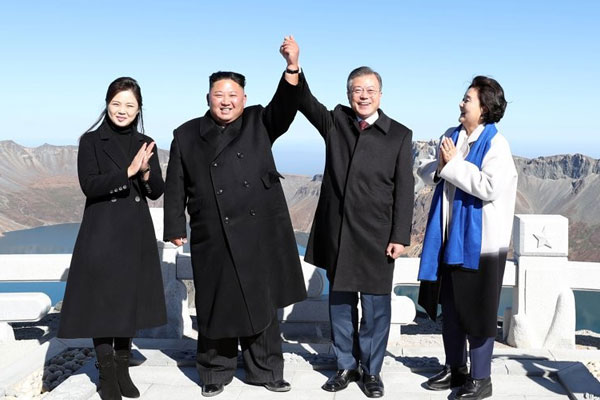 North Korea will permanently shut down a key missile test facility as a proof of its intention to denuclearize.

Moon said that for the first time the two Koreas have agreed on ways to denuclearize.

“The North has agreed to permanently dismantle its missile engine test site and missile launch tower in Dongchang-ri with experts from relevant countries participating."

Located in Dongchang-ri, North Pyongan Province, the Sohae Satellite Launching Station has been key to the North’s intercontinental missile development.

"Also, the North will take additional measures, including permanently dismantling the Yongbyon nuclear facility in line with the U.S.’ corresponding measures... Complete denuclearization of the Korean Peninsula is near."

While nuclear negotiations have hit a snag between Washington and Pyongyang, Kim assured that the two Koreas will continue efforts to make the Korean Peninsula nuclear free.

"We adopted a military accord to put an end to the history of horrible and tragic confrontation and hostility that has continued for decades, and we reaffirmed to exert efforts to turn the Korean Peninsula into a land of peace without nuclear weapons or nuclear threats."

Moon and Kim signed the Pyongyang Declaration, which also calls for easing inter-Korean military tension by preventing skirmishes in the border areas.

"The South and the North have agreed to remove all risks that could lead to war throughout the Korean Peninsula."

"... the September Pyongyang Joint Declaration has opened a new level of improved relations, turning the Korean Peninsula into a solid peace and safety area and accelerating the era of peace and prosperity."

The risk of armed conflicts has been real in the land and maritime border areas as the two sides are technically still at war.

Under the agreement, the two Koreas will set up a ten-kilometer buffer zone along the inter-Korean border, and refrain from artillery exercises in the area. They will also set an 80-kilometer maritime buffer zone in the East and West Sea.

Moon arrived in Pyongyang on Tuesday for his third summit with Kim. After the first round of talks a day earlier, the two leaders held the second round Wednesday morning for about an hour and ten minutes.