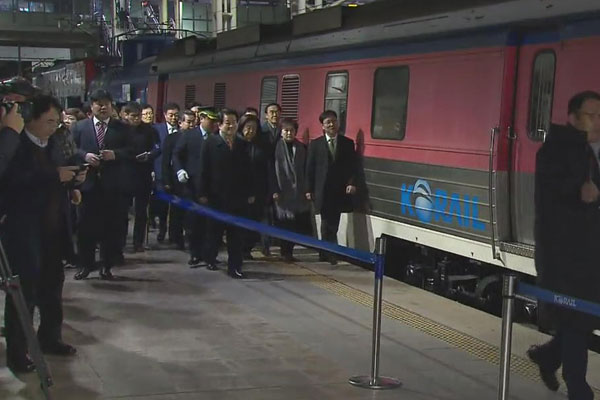 The two Koreas held a symbolic event Wednesday to signal the start of their grand project to reconnect severed inter-Korean railways.

Seoul sent Unification Minister Cho Myoung-gyon and Transport Minister Kim Hyun-mee to the ceremony in the North’s Panmun Station in the border town of Gaeseong.

The South Korean transportation minister said that a new era has now begun.

“We know the connection of rails and roads is more than just a physical integration. Via rail and roads people and resources will go back and forth and various cooperative exchanges will be promoted in culture, sports, tourism, forestry and medical areas. The artery linking the South and the North will become the main blood vessel for East Asian co-prosperity and expand our economic horizon to the continent.”

Actual construction work cannot begin as nuclear and missile sanctions are in place on North Korea. Just to hold the groundbreaking event, Seoul had to persuade the U.S. and the UN to make exemptions. North Korea’s vice railways minister Kim Yun-hyok on his part called for overcoming the unfriendly international atmosphere.

“Now is the time for us to put aside the past and go straight ahead without wavering in winds blowing at us… The result of the North-South rail and road project is up to the will and resolution of our people and if we worry about others and falter, we won’t be able to achieve the unification we long for so passionately."

The two Koreas each sent about 100 people to mark the event. The chairman of South Korea's ruling Democratic Party Lee Hae-han attended the event along with Ri Son-gwon, chief of the North Korean state agency in charge of unification affairs.

But the South’s conservative main opposition Liberty Korea Party did not send its delegation to the North. The party's chief, Kim Byoung-joon, likened the event to an "advance payment," saying it was held to boost President Moon Jae-in's approval rating.

Seoul's Unification Ministry said the two Koreas plan to draw up blueprints and designs for the envisioned inter-Korean railways after conducting additional surveys.