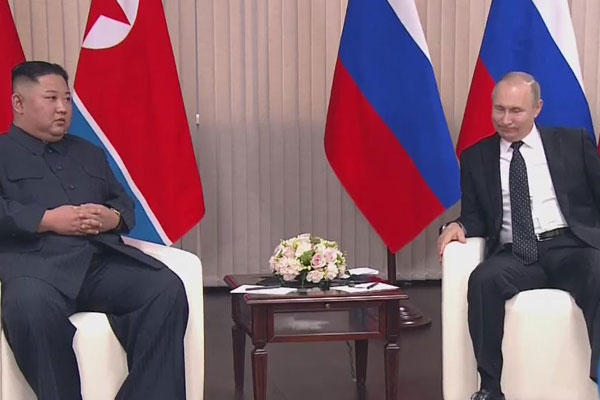 North Korea is seeking to corner the U.S. the wake of the Moscow-Pyongyang talks in Vladivostok on Thursday.

The North's state media on Friday cited Kim Jong- as telling President Vladimir Putin that the situation on the Korean Peninsula has reached a critical point and may return to its original state.

"the DPRK needs a guarantee of their safety, of the preservation of their sovereignty. And what guarantee could it be except the (restoration of) international law?"

With Kim the Russia factor in the nuclear dialogue, Putin after the summit pointed to safety concerns for Pyongyang. He hinted Moscow may have to intervene.

"I don't know if this format (of the six-party talks) needs to be restored right now, but I am deeply convinced that if we come to a situation when some guarantees for one side -- in this case, the guarantees of DPRK safety -- need to be elaborated, we cannot do so without international guarantees."

"the ceaseless development of North Korea-Russia ties not only serves our mutual is also indispensable for the region's securing peace and stability."

The first Putin-Kim talks came as North Korea and the U.S. struggling to narrow gaps in nuclear negotiations following the collapse of the Hanoi summit in February.

"A direct railway connection between the south of the Korean Peninsula and the north and Russia, with a connection with the Trans-Siberian railway, the possibility of laying pipelines - then we can talk about oil and gas, the possible construction of new (power) transmission linesAll this is possible (in cooperation with Russia)."

During the first Russia-North Korea summit in eight years, Putin and Kim also discussed ways to improve their economic ties, most of which are currently prohibited by the US-led UN sanctions on the North.

Before leaving the White House for a National Rifle Association meeting in , President Donald Trump addressed the recent Russia-North Korea summit in Vladivostok.

"I appreciated President Putin statement yesterday, he wants to see it done also. I think there's a lot of excitement toward getting a deal done with North Korea.... There's been no test, there has been no nothing."

Trump did not respond to Kim Jong- remarks at the summit that the situation on the Korean Peninsula has reached a critical point and may return to its “original state.” Kim was also quoted as telling Putin that peace on the peninsula is now up the future attitude of the U.S.

While brushing off the pressure from Putin and Kim, Trump also noted that the China factor is under control as well in dealing with North Korea.

"I have a great relationship with Kim Jong-. I appreciate that Russia and China us and China is helping us because I think they want to. They don't need nuclear weapons right next to their country."

He stressed that the Chinese are helping the U.S. denuclearize the North because of trade issues with the U.S.