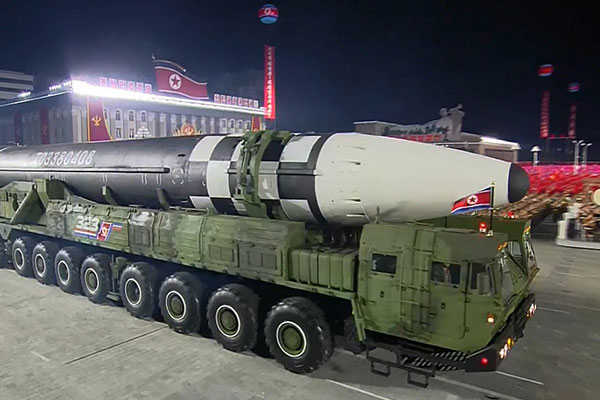 While stressing that the regime's push to strengthen its “war deterrence” capabilities is for self-defense, North Korea introduced new weapons including an intercontinental ballistic missile(ICBM) on Saturday, marking the 75th anniversary of the founding of its ruling Workers Party.

North Korea marked the 75th anniversary of the founding of its ruling Workers' Party on Saturday. In a rare night-time military parade that was revealed later in the day, the regime stressed war deterrence while introducing new weapons including a new intercontinental ballistic missile(ICBM).

It was the first such parade in two years since the last one held in September 2018 to celebrate the 70th anniversary of the establishment of the North Korean government.

The military parade was held in the early hours of Saturday in Kim Il-Sung square, with footage broadcast through its state media Korean Central Television from 7 p.m. that day.

North Korean leader Kim Jong-un made a speech during the event and said that while the North's war deterrence capabilities are not targeted at others, it would use the utmost force available to even the score if the North's safety is threatened.

The North Korean leader did not mention the U.S. during his speech.

Kim Jong-un also said he hopes that South Korea will recover from the COVID-19 pandemic and for both Koreas to join hands.

North Korea's new ICBM made an appearance towards the end of the parade, loaded on an eleven-axle transporter-erector-launcher(TEL). The new ICBM is presumably longer and wider than the North's latest Hwasong-15, implying a longer range.

The regime was widely expected to roll out strategic weapons during the parade including newly developed ICBMs or SLBMs as the North tends to mark every fifth and tenth anniversary with larger-scale events.

In events marking the 65th and 70th anniversaries of the ruling party’s foundation, Pyongyang showcased strategic weapons such as the Hwasong-10 and KN-14 ICBMs, respectively.