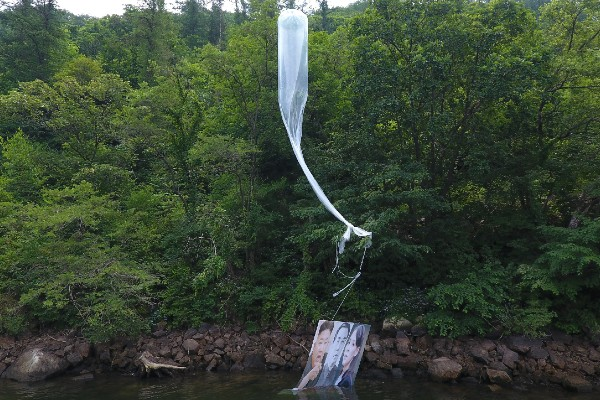 The South Korean government approved a controversial bill that aims to ban anti-Pyongyang leaflet activities. Facing criticism over infringement of freedom of expression, Seoul launched a campaign to explain its objective and position to the international community.

On Tuesday, the South Korean Cabinet approved revisions to a bill that bans the sending of anti-Pyongyang leaflets to North Korea over the inter-Korean border.

The defector-led campaigns, which aim to promote democracy to the North Korean people, have recently been the subject of strong protest from Pyongyang, leading to its demolition of an inter-Korean liaison office in June.

The bill, submitted by the ruling Democratic Party(DP), says those who violate the two Koreas' tension-easing agreement, including through leaflet campaigns, will face up to three years in prison or a maximum fine of 30 million won.

The bill has faced heavy criticism both in South Korea and in the United States over concerns that it infringes on freedom of expression, with a U.S. congressional committee set to convene next month to review it.

The minister in charge of inter-Korean affairs responded by saying that he will work with the National Assembly and enhance communication with the public to avoid misunderstandings over the ban.

The ministry sent out documents to dozens of foreign missions to explain Seoul's position, saying that the constitutional right to expression can not be prioritized over the lives and safety of South Koreans living near the Demilitarized Zone(DMZ).

Addressing criticisms that the ban could also be applied to deliveries of humanitarian supplies to North Korea through a third country, the ministry said the ban would only concern rare cases where leaflets or items sent from the South enter the North by way of a third country due to water or air currents.

It added that humanitarian shipments from a third country will be subject to the departing country's laws.

The Unification Ministry on Thursday said it will come up with clear guidelines defining the scope of the legislation.

Responding to questions from reporters, a ministry official said the ministry is currently reviewing the crafting of guidelines that would clearly outline the intended scope of the recent legal changes, apparently to dispel controversy over the interpretation of the law.

He added that the sending of anti-Pyongyang leaflets into North Korea from a third country would not fall under the legislation, a fact that would be clearly stipulated in the guidelines.