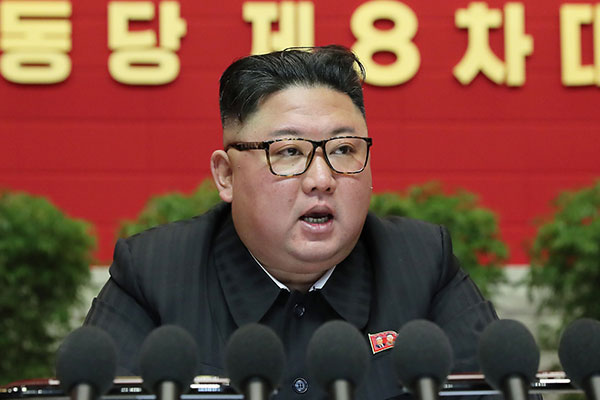 North Korean leader Kim Jong-un has vowed to strengthen the country's national defense to protect a "peaceful environment" for the people, according to the North’s state media on Thursday. Kim made the remark in an address during the second session of a rare ruling Workers’ Party congress.

The key message from North Korean leader Kim Jong-un on the second day of the eighth congress of the ruling Workers’ Party was to create a peaceful environment by boosting the country’s defense capabilities.

The state-run Korean Central News Agency reported that Kim made clear on Wednesday his will to protect the security of the nation and peaceful environment of socialist construction by greatly enhancing defense.

Up until now, the North had asserted the need for peace for the sake of concentrating on economic development, but analysts say the latest remark seems to reflect his commitment to national defense as long as peace is not established with the U.S.

Also, in Wednesday's report, the North Korean leader assessed the economic situation of the country and presented goals for innovation and development in a new five-year plan.

The sectors under review included transportation, construction, communications and commerce, as well as external economic relations.

However, there was no mention of the U.S. or South Korea.

It is still unclear for how long the congress will be held, though the previous congress lasted four days.

Kim Jong-un on Thursday reviewed inter-Korean relations and pledged to develop external ties at the ruling Workers' Party congress, according to the reclusive country's state-run media.

In his address to the ruling party congress, the North Korean leader said relations with South Korea and other countries will be pursued considering "the prevailing situation and the changed call of the times," the North's official Korean Central News Agency(KCNA) said Friday, without elaborating.

Kim on Friday reiterated a call for the United States to withdraw hostile policies while underlining the implementation of inter-Korean agreements.

The KCNA on Saturday relayed Kim's remarks made during this week's ruling Workers' Party congress.

The report cited Kim declaring an "eye for an eye" principle against Washington and saying that the key to establishing new North Korea-U.S. relations is the withdrawal of U.S. hostile policies.