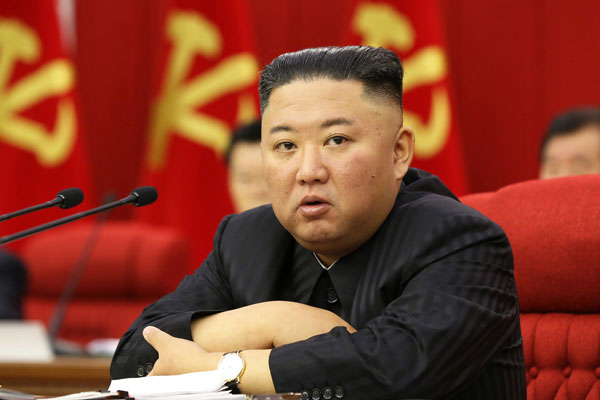 After the sudden death of former North Korean leader Kim Jong-il ten years ago, his son Kim Jong-un became the nation’s top leader at the age of 27 in an unprecedented third-generation hereditary power transition in modern history.

Analysts say that Kim Jong-un, unlike his predecessors, has shown a realistic and empathetic governing style characterized by unconventional public speeches and affectionate physical contact. Here is Hong Min, researcher at the Korea Institute for National Unification, with more.

Former leader Kim Jong-il employed a strategy of managing the state under the instruction of his late father Kim Il-sung in emergency mode. Kim Jong-un, in contrast, seems to have established state strategies with a goal of managing the state in a normal way. During the Kim Jong-il era, military-first politics and abstract, ideological authority were considered important. But it seems the current leader has put emphasis on pragmatic goals, such as developing science and technology and creating the knowledge-based economy. He has used policy terms that would appeal to the people easily, and he has actually made great efforts to carry out such policies. This differentiates him from his predecessor. He also supported party-centered politics to normalize the power system. As a people-friendly leader, he has enjoyed mingling with people and engaging in public displays of affection towards them in an effort to show his personal charm.

At the eighth congress of the Workers’ Party in January this year, Kim Jong-un was elected as general secretary of the party. North Korean media outlets have recently referred to him as Supreme Leader, which is a title that was previously reserved for the two former leaders. They have also underlined Kim Jong-un’s different ruling ideology, such as the people-first policy. It appears that the current North Korean leader, who marks 10 years in office, has reached a political status equivalent to that of his predecessors.

Kim Jong-un solidified his power more rapidly than his father. He holds all the three titles as the country’s top leader, such as general secretary of the party, chairman of the State Affairs Commission and the supreme commander of the Armed Forces.

What matters is how he can maintain a symbolic title, namely Supreme Leader, and how his achievements and legitimacy of inheriting revolutionary tradition can be recognized by future generations. Also, people around him should build his cult of personality. Kim is now in this process. A term “Kim Jong-un-ism” has emerged, while the local media have called him Supreme Leader lately, indicating that he has been given that title based on his achievements during his ten-year rule.

North Korea has carried out missile tests quite often and it has tested various types of missiles including ballistic and cruise missiles. Recently, it fired a new submarine-launched ballistic missile, which is apparently capable of carrying multiple warheads, as well as a hypersonic missile.

North Korea advanced nuclear weapons in the first phase between 2013 and 2017. During the period, it developed ICBMs that may be able to reach mainland U.S.  In the second phase from April 2019 to now, the North refrained from ICBM tests but tested short-range missiles that put South Korea and Japan within range as well as various new weapons. Some of them can actually be deployed for combat use.

While announcing a five-year plan to develop defense science and weapons system, North Korea pledged to continue with missile development in light of self-defense. Given that, the North will likely continue to develop nuclear weapons.

North Korea had intended to be recognized as a nuclear weapon state by the international community and boost the economy by introducing the policy of openness gradually. Contrary to the expectations, though, the more North Korea developed nuclear weapons, the worse its economy became.

Kim Jong-un’s economic policy and reform measures contained many positive elements. From the early years in office, he adopted a market-friendly policy. For example, factories and enterprises were given greater autonomy and would pay tax in return. There were about 200 to 300 general markets in the initial stage of Kim’s rule, but the number is estimated to be well above 500 now, with the unofficial market network expanded. It is assumed that the North Korean economy was in good shape before 2017. But five U.N. Security Council resolutions calling for harsh sanctions on North Korea have dealt a heavy blow to the local economy. The COVID-19 pandemic and frequent floods have deteriorated the already difficult economy. North Korea’s economy may worsen even further, unless the pandemic ends quickly.

Although the North Korea-U.S. summit broke down, North Korea highly evaluates the summit because it was able to hold a one with the U.S., the world’s superpower, on an equal footing. For North Korea, the summit was all the more significant because the two countries were in hostile relations. The North believes that its strategic status changed after the summit and it says it will reestablish its foreign relations in line with its enhanced status.

In the past, North Korea persistently asked for bilateral talks with the U.S.  However the U.S. refused, saying that dialogue itself would be a reward. But now, it is the U.S. that actively asks for dialogue. North Korea is trying to make the most of the completely changed mood for negotiations. For the North, this is the outcome of its summit with the U.S.

Ten years into Kim Jong-un’s rule, North Korea remains unresponsive to the Biden administration’s dialogue offer and the South Korean government’s proposal of declaring an official end to the Korean War. Amid intensifying conflict between the U.S. and China, conditions for dialogue between the North and the U.S. have worsened. To make matters worse, the prolonged border shutdown due to the pandemic is making the North Korean economy even more difficult. How will North Korea act in the year 2022?

During the party congress in January this year, North Korea presented the principle of “power for power and goodwill for goodwill,” which defines the attitude the North will take for the next five years. But North Korea remains silent about cooperation offers and responds aggressively to military training between the U.S. and South Korea through weapons its own tests. North Korea aims to permanently advance strategic weapons in the next five years. In the process, it will use the principle of “power for power and goodwill for goodwill” strategically. At present, the Biden administration remains lukewarm about dialogue with the North. But its North Korea policy may evolve differently, depending on the policy of the next South Korean government. Whatever the background, North Korea’s strategic goal is to use South Korea effectively, while not to escalate tension, until its advancement of its nuclear weapons reaches a certain irreversible level.

Analysts say that Kim Jong-un’s absolute power has become stronger over the last ten years. But North Korea’s diplomacy, security and economic situations keep deteriorating. Compared to ten years ago, the country’s economic difficulties have worsened, while the diplomatic environment has been more complicated. We’ll have to wait and see what choice the Kim Jong-un regime will make in 2022.