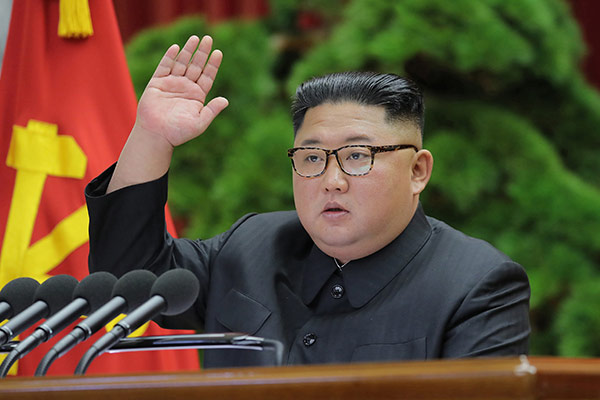 Last year, North Korean leader Kim Jong-un said that his country would seek a “new path” if the U.S. sticks to sanctions and pressure. It seems North Korea’s recent ruling party conference has disclosed, in part, what that “new path” is about.

In an unusual move, Kim skipped his annual New Year’s Day speech on Wednesday, January 1st. But during the four-day plenary session of the Workers’ Party’s Central Committee that wrapped up early this week, he hinted at the possibility of resuming nuclear and long-range missile tests.

North Korea has announced its leader’s New Year’s Day address every year since 1946. But this year, the reports on Kim Jong-un’s remarks at the party plenum appear to have replaced the regular New Year’s speech that outlines policy priorities in the coming year. North Korea’s founder Kim Il-sung used to announce his verbal New Year’s message, while his son and former leader Kim Jong-il would deliver the message in joint editorials carried by media outlets. But this year, on a very rare occasion, the North Korean media did not mention anything about the leader’s New Year’s message.

Kim Jong-un has announced his New Year’s message on January 1st every year since 2013. But this year, the North’s official newspaper Rodong Sinmun carried reports on the results of the party meeting on four pages, while the state-run Korean Central TV broadcast the reports repeatedly from Wednesday morning. Apparently, these reports replaced the leader’s regular, verbal message. It is also notable that the North held an unexpectedly long four-day party meeting late last year.

Formerly, the plenary meeting of the Workers’ Party’s Central Committee lasted days on several occasions. But the four-day conference is rather unusual. Typically, the session is held for a day and the results are announced later. But this time around, North Korea announced the meeting in advance in early December. Also, it reported the results of the conference from the previous day throughout the four-day period. I think the North planned the meeting carefully to deliver a message aimed at strengthening internal unity.

The multiday party meeting started on December 28th and continued through the last day of 2019, the year-end deadline set by North Korea for the U.S. to make concessions in their nuclear negotiations. This is the longest party plenum in 29 years since a similar meeting took place for five days in 1990.

In 2013, Kim Jong-un announced his commitment to the parallel pursuit of nuclear weapons development and economic growth. But the party plenum in 2018 showed that the focus shifted to economic development. During the latest party meeting, Kim stressed that his country would enhance defense capabilities to protect its own security, while still focusing on economic development. Obviously, a “new path” refers to self-reliance or improving the economy without depending on foreign countries, as North Korea has underlined for months. For analysts who wondered what the new path is about from a political or military point of view, I think the party gathering gave an answer, that is, stronger defense capabilities.

In short, North Korea seeks to take a new path by rebuilding the economy and strengthening military power. This is seen as a declaration to return to military confrontation, indicating that North Korea may end a moratorium on nuclear and intercontinental ballistic missile(ICBM) tests and resume provocations instead.

Kim did not specify what the “shocking actual action” or “strategic weapons” would be. It is assumed that the shocking action will be a military provocation, and strategic weapons are ICBMs or submarine-launched ballistic missiles or SLBM.

While a considerable part of North Korea’s ICBM technology has been proven, the country has only fired a missile from a barge platform designed to test underwater launches, not yet reaching the stage of launching an SLBM from a submarine. I imagine North Korea is trying to complete the technology while Pyongyang-Washington dialogue remains at a standstill. A successful SLBM launch is probably North Korea’s next military action aimed at raising the ante in future negotiations.

Analysts are most concerned about the possibility of North Korea’s launch of a new type of ICBM. The U.S. regards testing an ICBM that could reach its mainland as an act of crossing the red line. If North Korea goes ahead with an ICBM launch, the U.S. may push for fresh sanctions on the North through the U.N. Security Council and also consider a military option. If that happens, tension on the Korean Peninsula could rapidly reach a flashpoint. Another disturbing point is that the North Korean leader made no mention of relations between South and North Korea during the recent party meeting.

Still, Pyongyang left the door open for a diplomatic solution, as it remained ambiguous about exactly what the new strategic weapons are and when they will be shown.

Kim’s remarks during the party gathering are focused more on a message to his people that the country will continue to pursue self-reliance, rather than a threat to abandon negotiations with the U.S. The North implies that it can hold negotiations at any time as long as the U.S. drops its hostile policy toward North Korea and presents a new proposal as the North wants. Pyongyang has left open the possibility of dialogue, as it has not explicitly said it would walk out on denuclearization talks or resume nuclear or missile tests.

Meanwhile, the South Korean government has positively evaluated that the North has not declared an end to dialogue, stressing the need for talks between the North and the U.S. U.S. President Donald Trump has also made a soft response, saying that the North Korean leader is a “man of his word.”

Reacting to Kim’s criticism that the U.S. is stalling for time, Trump stressed that he and Kim have a good relationship in an apparent move to show that their relations are still intact. Similarly, Kim refrains from strident rhetoric against Trump. Both North Korea and the U.S. want to leave the door open for dialogue and keep the momentum of summit diplomacy alive. I think the two sides will try to find opportunities for bilateral contact and some diplomatic events during the first half of this year.

The key is how North Korea and the U.S. can narrow their widely differing views on corresponding measures leading to North Korea’s denuclearization. This issue will likely determine the fate of security conditions on the Korean Peninsula in 2020.