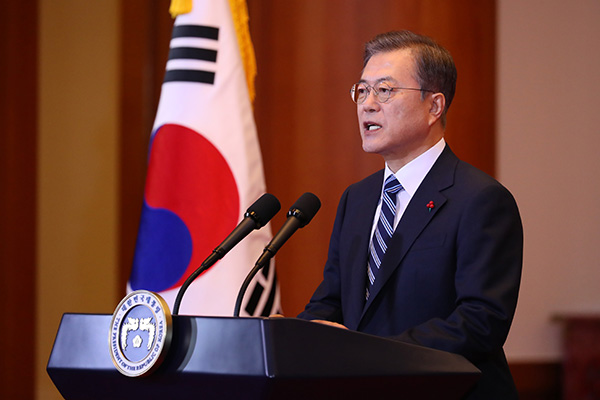 In his New Year’s speech on Tuesday, South Korean President Moon Jae-in said he would seek peace and prosperity on the Korean Peninsula by improving relations between South and North Korea.

The message included the Seoul government’s basic policy directions this year, including a renewed invitation to North Korean leader Kim Jong-un to visit the South.

Here’s Hong Hyun-ik, a senior researcher from the Sejong Institute, to give his analysis about Moon’s New Year’s message.

The message shows the Seoul government’s greater commitment to a better relationship between the South and the North as well as the importance of inter-Korean peace. It is true that Seoul and Pyongyang mostly paid attention to North Korea-U.S. ties last year. Now, Moon proposes that both sides focus more on strengthening bilateral cooperation this year to settle peace on their divided peninsula and make progress in North Korea-U.S. negotiations as well. For that purpose, Moon suggested that the two Koreas carry out various low-level cooperation projects to restore mutual trust and establish peace.

What Moon is trying to say is that both Seoul and Pyongyang need to advance their relations, apart from North Korea-U.S. dialogue. The president also expressed his frustration over the deadlock in cross-border relations.

South and North Korea spurred progress in their peace process in 2018. But their efforts lost steam after the North Korea-U.S. summit ended without an agreement in Hanoi in February of last year. The South Korean government should have played its own part more actively to prevent the stalled nuclear negotiations between the North and the U.S. from affecting inter-Korean relations. I think Moon reflected on this part and expressed his intention not to be swayed by Washington’s attitude entirely when it comes to South-North relations. He seems to be firmly determined to patch up inter-Korean relations by all means.

The Seoul government has so far prioritized North Korea-U.S. talks over inter-Korean dialogue, in the belief that successful negotiations between the North and the U.S. will help promote inter-Korean cooperation more quickly and effectively.

However, Seoul-Pyongyang relations have regressed since the collapse of the Hanoi summit last February. North Korea has since constantly criticized the Seoul government for being pushed around by the U.S. In its major party meeting late last year, North Korea did not even mention inter-Korean relations.

As the peace process on the Korean Peninsula has been put on the backburner, Moon is attempting to jumpstart cross-border dialogue, calling for Kim Jong-un’s reciprocal visit to Seoul.

Moon visited Pyongyang in September of 2018 to hold a summit with Kim and sign the September 19th Pyongyang Declaration. Clause 6 of the declaration states that Kim agreed to visit Seoul at an early date at the invitation of Moon.

But following the failed summit in Hanoi, North Korea stepped up its criticism of the South Korean government. As a result, Kim’s return visit was never mentioned throughout last year. Now, Moon seems to be thinking that his government should do something. The North Korean leader’s visit to Seoul, if realized, will improve bilateral ties dramatically. That’s why Moon has suggested that the South and the North make concerted efforts to create the conditions for Kim to visit Seoul.

Of course, Moon’s invitation to Kim doesn’t mean that South Korea does not recognize the importance of North Korea-U.S. dialogue. The key to Korean Peninsula issues is still North Korea’s denuclearization, which should be solved between Washington and Pyongyang through negotiations.

But amid the stalemate in their dialogue and regression in inter-Korean ties, Moon is once again underlining the need for South Korea to be in the driver’s seat in terms of the peace process on the Korean Peninsula. By addressing problems related to South-North relations first, the president is seeking to make progress in North Korea’s denuclearization and in Pyongyang-Washington relations.

Also in his New Year’s speech, Moon spelled out some inter-Korean cooperation programs that could be put into action.

For the two Koreas, sports exchanges are one of the few joint projects that are not subject to U.N. sanctions. Moon said that Seoul and Pyongyang should continue discussions over fielding joint inter-Korean teams at the Tokyo Olympics. He also called for North Korea to send athletes to sports competitions to be held in South Korea this year, such as the East Asian Weightlifting Championships and the World Table Tennis Championships.

Moon recalled that he and the North Korean leader had agreed to make a joint bid to host the 2032 Summer Olympics, pointing out that the two sides have already delivered their intent to co-host the Olympics to the International Olympic Committee.

In addition, Moon expressed his hope that Seoul and Pyongyang will work on the connection of cross-border railways and roads within the range of not violating international sanctions. Last year, the president offered to transform the Demilitarized Zone bisecting the two Koreas into a U.N.-led international peace zone. Now, he has proposed that the South and the North work together to put the DMZ on UNESCO’s World Heritage List.

These proposals involve inter-Korean cooperation projects that could be implemented, even with sanctions in place. Low-level bilateral cooperation might prompt the two Koreas to increase their contact and exchanges, through which some progress could be made in North Korea-U.S. dialogue. This virtuous circle is what Moon is aiming for.

The problem is how North Korea will react. 2019 started with high expectations for the second North Korea-U.S. summit. Unfortunately, the no-deal summit in Hanoi shocked the diplomatic community and also froze inter-Korean relations quickly. Under these circumstances, the Seoul government needs to make consistent efforts to open the door for dialogue.

Since February of last year, North Korea has ratcheted up its criticism of Seoul, especially for conducting military exercises jointly with the U.S., although they were scaled back. In this situation, the South Korean government has to find out what it can do to mend ties with Pyongyang and continue to show patience with the North, as it has done thus far. It’s time to display diplomatic skills and wisdom.

We hope that the South Korean president’s proposals in his New Year’s address will bring a positive change in regional diplomacy.