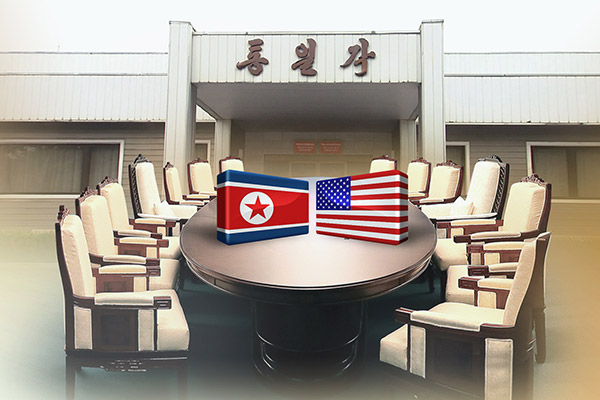 Andrew Kim, head of the Central Intelligence Agency or CIA’s Korea Mission Center, reportedly made contact with North Korean officials at the truce village of Panmunjom on December 3 during a previously unannounced visit to South Korea. Experts are speculating if the recent closed-door meeting will help move nuclear negotiations between North Korea and the U.S. forward. Kim Geun-sik, a political science professor at Kyungnam University, gives his analysis of the latest North Korea-U.S. dialogue.

The news about Andrew Kim’s recent South Korea visit indicates a possible revival of momentum for North Korea-U.S. negotiations. Kim is known to work closely with U.S. Secretary of State Mike Pompeo: Kim accompanied Pompeo on all four of his trips to Pyongyang this year. The Korean-American is also said to have made contact with North Korea behind the scenes before and after the North Korea-U.S. summit in Singapore in June.

It has been confirmed that he recently made a secret visit to Seoul and met North Korean officials in Panmunjom, although it is uncertain exactly whom he met. It is assumed that they discussed agenda items for possible high-level talks between the North and the U.S. including a second summit. The two sides may have also explored any changes in the other’s position.

Pyongyang and Washington initially planned to hold high-level talks between Pompeo and his North Korean counterpart Kim Yong-chol on November 8. But the meeting has been postponed, and the two sides have not yet set a new date. Andrew Kim’s visit to Panmunjom certainly merits attention, since it comes amid a standstill between the North and the U.S. As Professor Kim explained, Andrew Kim played a key role in facilitating the June summit between U.S. President Donald Trump and North Korean leader Kim Jong-un. Professor Kim continues.

According to reports, it was North Korea that first proposed the meeting in Panmunjom. I guess it was necessary for North Korea to figure out what the U.S. has in mind ahead of high-level talks with the U.S. and a second bilateral summit.

The U.S., for its part, also found it necessary to know if there is any change in Kim Jong-un’s attitude and whether there is any issue on which the two sides may reach a compromise on at future talks. In other words, both sides used the recent meeting to explore each other’s position and strategy.

The recent Panmunjom negotiations, if they turn out to be successful, may lead to future high-level talks between North Korea and the U.S. The Panmunjom channel, in fact, was activated right after a meeting between South Korean President Moon Jae-in and U.S. President Donald Trump on the sidelines of the G20 Summit in Argentina last week.

Following the South Korea-U.S. summit as well as the China-U.S. summit during the event, Donald Trump has expressed commitment to resolving the North Korean nuclear issue.

Amid the current deadlock in North Korea-U.S. negotiations, South Korean President Moon Jae-in may have found it rather uncomfortable to bring up the issue of North Korean leader Kim Jong-un’s possible visit to Seoul during his summit with Trump. But the American president agreed that Kim’s Seoul visit would provide additional momentum for efforts to establish peace on the Korean Peninsula. This will certainly give Moon more room to play his mediating role.

Cooperation between South Korea and the U.S. is important, of course, when it comes to eliciting a change from North Korea. But it is also crucial to secure support from China. Trump has often expressed displeasure with China, saying that Beijing controls Pyongyang inappropriately behind the scenes.

But regarding his recent meeting with Chinese President Xi Jinping, Trump said that Xi agreed to work with him on North Korea. Obviously, Trump expects that South Korea and China will move in sync with the U.S. when dealing with North Korean affairs overall, including applying pressure on Pyongyang.

During a working dinner between Xi and Trump the following day, Trump also demonstrated close cooperation between China and the U.S. on North Korean issues. Trump has previously accused China of pulling the strings behind North Korea. In an apparent shift, however, he stressed the importance of communication between Beijing and Washington and indicated that he seeks to accelerate North Korea’s denuclearization with the help of China. It seems that efforts are underway to make the second North Korea-U.S. summit happen.

Now that North Korea and the U.S. have held working-level contact, they might hold high-level talks soon to discuss specifics about the second summit, including an exact date and location.

One of the important points we can focus on for now is the North Korean leader’s visit to Seoul and the fourth summit between Moon and Kim. If the inter-Korean summit in Seoul produces a positive outcome, and therefore if Kim’s Seoul visit creates positive momentum for the denuclearization of North Korea, as mentioned during the latest South Korea-U.S. summit, it will form a favorable mood for a second summit between North Korea and the U.S.

On his way back home after attending the G20 Summit, Trump said that his second summit with Kim could take place in January or February, adding that he is considering three different locations for the meeting.

U.S. National Security Advisor John Bolton also said on Tuesday that Trump wants a second summit with Kim to ensure the North Korean leader makes good on the promises he made at their first meeting in June.

With the U.S. showing its strong commitment to another summit with North Korea, attention is focused on how Pyongyang will react.

Pyongyang has tough choices to make. There is little daylight between Washington, Seoul and Beijing concerning North Korea. This will further strain the Northern economy and may lead Kim Jong-un to conclude that Trump will not ease pressure on Pyongyang until he makes real concessions. With no clear path forward, Kim may acquiesce and agree to the demands made by Washington.

Alternatively, he may decide that he has done enough to satisfy the conditions established by the U.S. He may predicate future talks on Washington’s softening its hard-line stance toward Pyongyang. Kim will decide after he makes a visit to South Korea and North Korea concludes high-level talks with the U.S. If Kim insists on Washington easing sanctions on Pyongyang first, the negotiation over dismantling Pyongyang’s nuclear program will lose momentum. President Trump will remain steadfast and as such, Kim may conclude that he will need to be flexible in negotiating a deal with the U.S. For his part, President Moon is expected to play a mediating role.

Stalled negotiations over Pyongyang’s nuclear program may perhaps move forward after North Korea and the United States held secret talks earlier this month. This positive development may catalyze a few diplomatic breakthroughs. First, Kim Jong-un agreed to visit South Korea by year’s end. Furthermore, there seems to be a good chance the leaders of the United States and North Korea will meet a second time. It is with these developments that the ball now rests squarely in Pyongyang’s court.