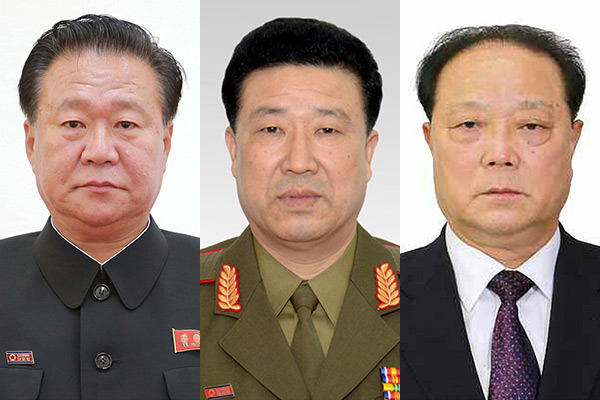 Choe Ryong-hae is the vice chairman of the Workers’ Party and also the director of the party’s Organization and Guidance Department.

The department director is an important post; former North Korean leader Kim Jong-il held the position himself. The department is a powerful oversight body that has, in effect, propped up the communist regime. Choe is considered by many to be Kim Jong-un’s right-hand man with significant control over the party, government and military.

The other two officials are Minister of State Security Jong Kyong-thaek(정경택) and director of the Propaganda and Agitation Department Pak Kwang-ho(박광호). The Ministry of State Security plays a key role in directing censorship activities and violating human rights. Pak’s department, meanwhile, supervises all state media. Kim Jong-un’s younger sister Kim Yo-jong holds the title of vice director at this department.

Perhaps North Korea is upset about Washington’s fresh sanctions on three of its top officials. The nation is hypersensitive about the human rights issue, which it regards as a matter of regime security.

The U.S. Treasury Department sanctioned three senior North Korean officials on December 10, the 70th anniversary of International Human Rights Day. This is the first time that the U.S. has applied new human rights sanctions on North Korea since their bilateral summit in Singapore in June.

Since July 2016, the U.S. has imposed sanctions related to North Korean human rights violations on 13 institutions and 32 individuals, including North Korean leader Kim Jong-un. But these sanctions were erected in the midst of poor bilateral relations in the wake of North Korea’s nuclear and missile provocations. Mr. Hong explains why the latest sanctions came at this particular time.

The second North Korea-U.S. summit is expected to take place in January or February next year, but the North has yet to implement practical denuclearization measures that the Trump administration wants.

In fact, the sanctions freeze the North Koreans’ assets in the U.S. and ban their financial transactions with U.S. entities. But the sanctioned individuals aren’t known to have conducted transactions with any Americans. So, the sanction measures are largely symbolic and may be a way for the U.S. to leverage greater pressure on Pyongyang to commit to denuclearization.

Under the North Korea Sanctions and Policy Enhancement Act, the U.S. State Department is required to provide a human rights report to Congress every 180 days. However, the US was aware of the violations for some time, suggesting the U.S. government skipped the implementation of these particular human rights sanctions, at least once, in consideration of on-going dialogue with the North.

Coming amidst a deadlock in nuclear negotiations, some analysts speculate that the U.S. has used human rights issues to elicit a change of attitude from the Kim regime. Mr. Hong continues.

Trump’s national security adviser John Bolton has said that the U.S. will consider lifting sanctions when there is “performance” in North Korea’s denuclearization. For a successful North Korea-U.S. summit early next year, the U.S. is offering this incentive while imposing additional sanctions on the North at the same time. On the whole, the U.S. is taking a carrot and stick approach.

I think the human rights sanctions are part of Washington’s measures aimed at prompting Pyongyang to take practical steps toward denuclearization and generate results at a potential North Korea-U.S. summit early next year.

The U.S. government’s recent sanctions reflect its intention to apply continuous pressure on North Korea but also a willingness to engage in dialogue. The key is how North Korea will interprete Washington’s stick-and-carrot strategy.

Of course, North Korea will protest the U.S.’ decision. But Trump has expressed his trust in the North Korean leader, hyperbolically saying he fell in love with Kim. He has said a second summit with Kim will be held in January or February next year at one of three possible locations.

North Korea, for its part, is concentrating on another summit with the U.S. for now, lessening the likelihood of Kim Jong-un’s visit to Seoul this year—a promise he made with South Korean President Moon Jae-in in September. The North Korean government may criticize the U.S., but the criticism will not be harsh enough to spoil the mood for nuclear negotiations altogether or delay a future North Korea-U.S. summit any further.

On Tuesday, North Korean media outlets denounced Washington’s decision, calling it a hostile act that runs counter to the goodwill spirit of the Singapore summit between Trump and Kim. But the North will likely adjust its level of criticism, considering a second summit with the U.S. is still possible. Strident criticism from Pyongyang may be interpreted by Washington as a rejection of high-level talks, especially as the North drags its feet on denuclearization efforts.

As it becomes increasingly unlikely that the North Korean leader will visit Seoul by year’s end, Washington’s human rights sanctions emerge as an additional variable in regional diplomacy. High-level talks between North Korea and the U.S. may disentangle this complicated situation.

North Korea and the U.S. could negotiate a breakthrough deal at their summit, where Kim Jong-un presents pragmatic denuclearization measures and Trump lifts sanctions on the North or exempts inter-Korean economic cooperation programs. Only then might the North Korean leader visit Seoul. Therefore I think whether the North and the U.S. will actually hold high-level talks will determine how diplomacy in the region unfolds.

High level talks between the US and North Korea were initially scheduled to take place in early November before being postponed. Any progress in relations between the two countries will hinge on getting these talks back on track.