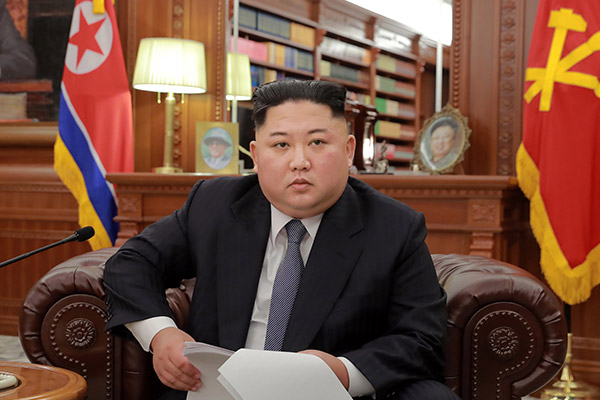 North Korean leader Kim Jong-un delivered his New Year’s speech on January 1. In it, he reaffirmed a commitment to complete denuclearization of the Korean peninsula and a second summit with U.S. President Donald Trump. The North Korean leader’s annual message typically outlines the country's priorities and objectives in the coming year. Analysts are looking for any clues that may signal a way to break through stalled North Korea-U.S. negotiations.

With more, here’s Professor Chung Dae-jin from the Institute of Unification at Ajou University.

The unprecedented format of this year’s speech drew more attention than its substance. In pre-recorded footage, Kim is seen descending stairs in the Workers’ Party building, accompanied by three key officials: his sister Kim Yo-jong(김여정), Kim Chang-son(김창선) and Jo Yong-won(조용원). The leader also wore a Western suit and tie, not his usual Mao suit.

He delivered the speech itself in a room with an antique and elegant atmosphere, decorated with the portraits of his father and grandfather. It seemed that the room had been prepared for this particular purpose.

This year, Kim Jong-un brought a fresh look to his New Year’s address. In previous years, the leader stood at a lectern to deliver his speech, with a Workers’ Party flag behind him. But this year, he was seated on a couch in a welcoming office. Moreover, Kim was clad in a dark blue suit and gray-blue necktie, in an apparent bid to promote a friendly and approachable image among the North Korean people. His choice of attire also suggests a desire to promote the normalcy of the North Korean state to the outside world. Overall, the 30-minute speech attempts to depict a leader who is both gentle and confident.

Two-thirds of this year’s address is tailored for a domestic audience, with an emphasis placed on the need to build a self-reliant economy. In regards to inter-Korean relations, Kim calls for resuming the Gaeseong Industrial Park project and the Mt. Geumgang tour program without conditions. He also stresses the importance of maintaining peace in cross-border ties.

In a message directed toward the United States, Kim says he is willing to sit down again with the U.S. president at any time, while reaffirming his resolve to pursue denuclearization.

In short, Kim reiterated his determination to seek dialogue and peace in relations with South Korea as well as with the U.S.  North Korea and the U.S. will have to resolve more specific issues through additional dialogue including high-level talks in the future. But the North Korean leader refrained from threatening rhetoric, such as referring to a nuclear button on his desk as he did in last year’s speech. Kim instead sent a message of peace, and I think this is a positive signal.

Broadcast on the North’s Korean Central Television, peace and the economy were the major themes of Kim’s speech. Unlike last year, Kim avoided provocations and instead expressed a strong commitment to improving North Korea-U.S. relations. Domestically, he pledged a full effort to develop the economy. As Professor Chung notes, Kim also spoke of the nuclear issue.

Kim Jong-un for the first time mentioned the phrase “complete denuclearization.” He also said that his country would not use or spread nuclear weapons. “Spread” here can be read as proliferation. The U.S. cares a great deal about nuclear non-proliferation. For strategists in Washington, the goal is, of course, the complete denuclearization of North Korea. But if they inevitably have to accept a lower threshold of denuclearization, nonproliferation would be a critical component of any concession. Kim may be sending an indirect message to the U.S. by using the word “spread.”

Kim said that complete denuclearization is the unwavering position of the North Korean state and that his country will not create, test, use, or spread nuclear weapons in the future.

Here, the phrase “not spread” can be interpreted as a pledge to stop nuclear proliferation, which the U.S. is highly wary of. If the North Korean leader makes good on his promise, Pyongyang and Washington may skip over nuclear freeze negotiations and jump to the removal of North Korea’s existing nuclear weapons.

Kim’s apparent receptiveness towards denuclearization, as indicated in his New Year’s speech, reflects a hope to improve ties with the U.S.

Kim says that he will walk the path of complete denuclearization if the U.S. takes corresponding measures. Without these reciprocal measures, however, he says North Korea will seek a new path. It may sound intimidating, but it is still a conciliatory expression, compared to last year’s remarks. On the whole, the leader suggests that he and Trump meet for dialogue.

It seems that Kim is rushing to resolve the nuclear issue, just as he seeks to quickly develop the economy. That is, he might be thinking of skipping high-level talks and other working-level meetings, and moving directly to a second summit with Trump to address the denuclearization process. In doing so, he may urge the international community to ease sanctions on his country and pave the way for building a strong economy. His New Year’s address reflects this hope.

Kim said he is always ready to sit face-to-face again with Trump, but warns that he will take a different path if forced to do so. This may be viewed as a two-track strategy, wherein Kim harnesses both dialogue and pressure when dealing with the U.S. Many have likened this approach to an olive branch with sharp thorns.

Kim said he is willing to reopen the Gaeseong Industrial Complex and restart South Korean tours to Mt. Geumgang. He is indirectly urging the Seoul government to modify sanctions at least when it comes to inter-Korean economic cooperation so that North Korea can continue to advance relations with the South and also build trust with the U.S.

Inter-Korean economic cooperation will gain traction only after international sanctions on North Korea are eased or lifted. Thus, analysts say it is necessary to monitor how North Korea-U.S. dialogue unfolds.

Trump tweeted on Tuesday that he is looking forward to meeting with Chairman Kim, a positive response to Kim’s New Year’s message. Both Kim and Trump have made it clear that they are committed to dialogue. Corresponding follow-up measures will likely determine whether or not negotiations between North Korea and the U.S. will move forward.