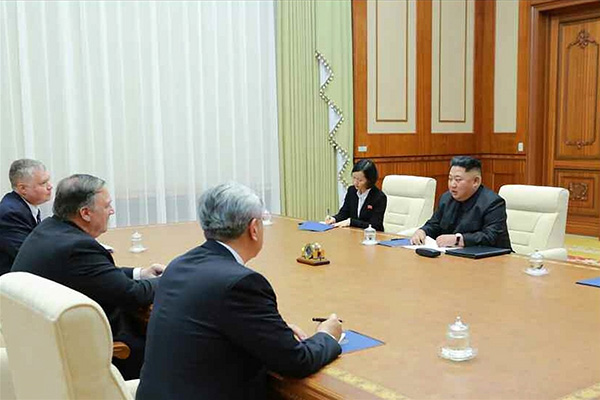 The process of denuclearization typically follows the steps of declaration, verification and dismantlement. But North Korea is working the opposite direction. Rather than accepting verification measures for the Yongbyon nuclear facility, North Korea appears to first want recognition for the dismantlement of the Punggye-ri nuclear test site which was carried out on May 24th as a "preliminary measure of good will." The North wants to show that the task was properly executed. It’s significant that Pyongyang has accepted inspections and verification at least regarding the Punggye-ri site.

In May this year, North Korea invited South Korean and international press reporters to observe the intentional caving of the Punggye-ri test site located in Kilju county, North Hamgyong Province. The North made particular efforts to show the blast was not a mere show by also caving in areas where nuclear tests were not conducted. However, many remain skeptical of the maneuver, as Pyongyang did not allow inspectors in or for evidence to be collected and tested that would provide clues as to the nature of the regime's nuclear development.

North Korea's latest pledge to allow inspections is therefore viewed as a step forward. It's important to note that the declaration and submission of a list of the North's nuclear arsenal – believed to be the first step in the denuclearization process – has been skipped over, at least for now. Mr. Chung explains.

The declaration is a rather difficult step. North Korea had submitted a 16,000 page report as well as aluminum tubes related to the Yongbyon nuclear reactor between 2005 and 2009. But North Korea's concern was that no matter what they put out to the world, the international community will not believe it. Meanwhile the international community continued to believe North Korea was trying to conceal its nuclear capabilities and under report its nuclear program.

This is why the declaration stage had little success in the past: mutual mistrust and a lack of trust-building arrangements. In this light, the North’s willingness to allow inspections in line with expectations from the international community is meaningful, and suggests a move towards denuclearization.

Uncompromising insistence that the North publically declare all details of its nuclear programs in the absence of mutual trust-building mechanisms could trigger misunderstanding and distrust between the US and Pyongyang. The U.S. has for years insisted the North submit a full list of its nuclear capabilities to be dismantled, and the North has called for corresponding measures from the U.S., such as a formal end to the Korean War. The two sides have now jumped over the first phase and agreed to begin from the second stage which involves inspections, visitations and verification. This implies both sides are willing to move toward denuclearization while building trust. Pompeo's fourth North Korea trip has resulted in an agreement to inspect the Punggye-ri nuclear test site. Attention now turns to the makeup of the inspection team and what its capacities will be.

The International Atomic Energy Agency(IAEA) is the highest authority on nuclear inspections and verification, and will likely be granted access to Punggye-ri.  However if the site is to be properly inspected, it should not have been dismantled so that inspectors could go in and collect residue samples left from nuclear testing and determine whether there was uranium or plutonium used, as well as gauge the strength of the nuclear explosions.

At present, if only the entrance to the test site has been dismantled, facilities underneath are still operable for nuclear testing. If the underground facilities are also dismantled and the entrance is blocked, a tunnel needs to be built in order to access samples from underneath for verification purposes. This will be a highly technical, difficult process.

If allowed, it will be the first time in nine years inspectors from the IAEA have visited the North since they were kicked out in 2009. The IAEA has said that inspections can begin within a matter of weeks following agreements among concerned nations and approval from its board of directors. Field inspections are expected to focus on whether the detonation lab where nuclear testing physically took place has indeed been completely destroyed. Inspection of No. 3 and 4 tunnels, which were also destroyed, will also be key. North Korea’s cooperation during the inspections could also change prospects on future U.S.-North Korea negotiations. Professor Chung explains.

If North Korea demonstrates sincerity in the inspections and abides by international standards 100 percent, it will be entering into the denuclearization process in a convincing way. But all this is new, unchartered territory that has not been done before. The North will want low-level inspections, verification and denuclearization while the U.S. and the international community will continue to insist on complete full-level denuclearization. If results of the Punggye-ri inspections are fairly conclusive, the path forward will be in how to narrow the gap between U.S. and North Korean expectations.

Once inspections begin, the denuclearization process will be moving forward.  If the U.S. is confident the Punggye-ri site has been irreversibly demolished, and North Korea allows inspections of more weapons test sites, such as the Sohae missile engine test facility at Tongchang-ri, it is expected to correspond with the Korean War-ending declaration.

Secretary of State Mike Pompeo also said Tuesday that he sees a path towards the goal of final, fully verified denuclearization. If the process proceeds with the shutdown of the Yongbyon nuclear facility and additional measures taken by the U.S., this will be close to a step-by-step simultaneous process. Meanwhile, working-level talks between the U.S. and North Korea could begin as early as next week.

The Punggye-ri inspections will top the agenda during working-level discussions. The two sides will also discuss how to verify the measures North Korea claims it has taken so far. Then later, talks will also cover the corresponding measures from the U.S. and what additional steps North Korea will take, as each side takes a prudent approach in their give and take.

Details of an agreement on nuclear inspections reached between Pyongyang and Washington are expected to shape the denuclearization process that follows. All eyes are now on working-level talks led by U.S. Special Representative for North Korea Stephen Biegun and his North Korean counterpart.