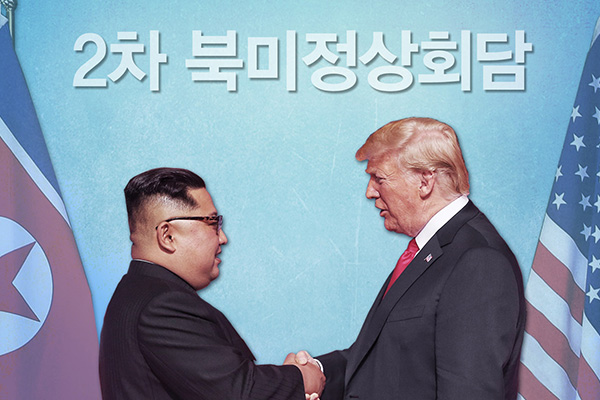 A second summit between U.S. President Donald Trump and North Korean leader Kim Jong-un, which Trump said would take place after the U.S. midterm elections in November, will likely not occur until 2019.

Speaking in Russia on Monday, October 22nd, White House National Security Adviser John Bolton has said that a second U.S.-North Korea summit would be held early next year. It was the first public comment from a White House official on a possible timeframe for another Trump-Kim summit. With more, here’s Jin Hee-gwan, professor of unification studies at Inje University.

Judging from Bolton’s remarks, I imagine North Korea and the U.S. have yet to finish coordinating detailed working-level matters concerning the summit, such as the location, date and discussion topics. The U.S. holds its next presidential election two years from now. But it is North Korea that is pressed for time. Also in 2020, Pyongyang will convene the eighth congress of the Workers’ Party and assess the result of its five-year economic development plan. But to see tangible results of the plan around that time, the nation should act now. Thus, if the U.S. delays negotiations with the North, Pyongyang might be nervous and impatient.

The U.S. seems patient while it waits for North Korea to take additional denuclearization measures. Pyongyang for its part continues to demand a formal end to the Korean War but is shifting focus towards the easing of sanctions. The apparent disconnect in strategic objectives between the two sides is likely behind the new timeframe for a second Trump-Kim summit.

While the first North Korea-U.S. summit in Singapore in June presented basic agreed-upon principles of a nuclear-free Korean Peninsula and regional peace, a second summit should produce more specific, actionable results. Both the US and North Korea want to go into to any future summits with as much leverage as possible, and thus a timeline on North Korea’s denuclearization has yet to be agreed upon.

After the prospective second North Korea-U.S. summit, the North was expected to hold a series of summit talks with other nations. As North Korean leader Kim Jong-un has already visited China three times this year, his Chinese counterpart Xi Jinping is expected to visit Pyongyang sooner or later. Kim is also likely to travel to Russia within the year. In addition, the fourth summit between Kim and South Korean President Moon Jae-in might be held in Seoul before year’s end. But the postponement of the second North Korea-U.S. summit may affect the schedule of those summit meetings.

Following the September inter-Korean summit in Pyongyang, U.S. Secretary of State Mike Pompeo visited Pyongyang earlier this month in an effort to revive the momentum of denuclearization talks between the North and the U.S. and begin to coordinate a possible second summit between the leaders of both countries.

But concerned states in the region, such as China and Russia, are moving forward with their designs on the peninsula and are seemingly invested in the inter-Korean peace process. Chinese president Xi Jinping may visit North Korea soon, and Kim Jong-un may travel to Russia to meet Russian President Vladimir Putin.

However, these meetings may be delayed, in part due to the status of a second North Korea-U.S. summit, which some believe may be the catalyst to formally ending the Korean War.

Many analysts expect that a second North Korea-U.S. summit will certainly lead to the declaration of an end to the war. A delay in the summit will, therefore, make it difficult to reach a declaration ending the war this year.

Other than the end-of-war declaration, North Korea also hopes that part of international sanctions on the nation will be lifted. South and North Korea agreed to hold a groundbreaking ceremony for connecting rail and road systems on their divided peninsula this year, as stated in the Pyongyang Declaration. Of course, the ceremony is just the beginning and the railway project should make progress afterwards. To make that happen, an official end to the Korean War should be declared and some economic sanctions on North Korea should also be lifted as well.

If the North Korea-U.S. summit is drawn out, the inter-Korean railway project may end up with the groundbreaking ceremony. Then, it will be difficult for Seoul and Pyongyang to move their relations further forward.

The South Korean government’s plans for the inter-Korean process hinge on many assumptions, such as a second North Korea-U.S. within the year, Pyongyang’s dismantlement of its Yongbyon nuclear facilities, and corresponding measures from Washington.

It also believes Kim Jong-un will visit Seoul and that three countries, namely, the two Koreas and the U.S., would declare an end to the Korean War.

I think the two Koreas may push ahead with another summit in order to take the lead in addressing Korean Peninsula issues.

During the Pyongyang summit, Moon said that the North Korean leader would visit Seoul by year’s end, unless there were special mitigating circumstances. A delay in the North Korea-U.S. summit is not considered “special circumstances,” since it is not an inter-Korean issue but a matter between the North and the U.S. So, regardless of the Pyongyang-Washington summit, Kim Jong-un’s visit to Seoul could happen within the year as planned.

The presidential office in Seoul said on Tuesday that it still expects Kim Jong-un to visit Seoul this year as planned. Despite turbulence between Washington and Pyongyang, the inter-Korean summit in Pyongyang proceeded as scheduled and contributed to facilitating North Korea-U.S. contact.

Yet, there are concerns within the U.S. that inter-Korean relations are moving too fast. Specifics about the end-of-war declaration and Kim Jong-un’s Seoul visit will be revealed only after North Korea and the U.S. hold high-level talks and draw up an outline of their second summit.

High-level talks between North Korea and the U.S., if held, will discuss details about a road map and timeframe for North Korea’s denuclearization.

I guess the two sides will make working-level contact in Panmunjom before the high-level meeting. If the two countries actually hold high-level talks, it likely means they have reached a stage of adjusting the final itinerary and agenda for their second bilateral summit. Such talks therefore bode well for a successful summit.

A specific date and venue for high-level talks between North Korea and the U.S. has not yet been confirmed. North Korea for its part seems invested in a second meeting between Trump and Kim and dispatched correspondence to the White House signaling their intent to follow through with a second summit. As the viability of such a meeting becomes unclear, attention turns to how North Korea will react.