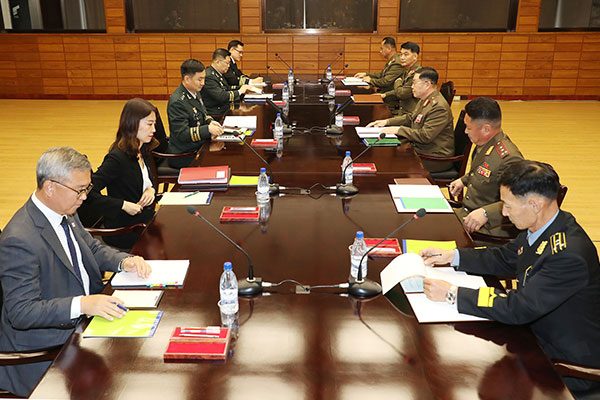 The Joint Security Area or JSA in the truce village of Panmunjom will likely be the first inter-Korean border area to see military tension decrease. Just a year ago, gunshots were fired from North Korea at a North Korean soldier who defected to South Korea through this area. But officials hope the long-tense area will be transformed into a symbol of peace, as military authorities of the two Koreas and the United Nations Command wrap up joint verification of disarmament in the JSA. Here’s Shin Beom-chul at the Asan Institute for Policy Studies to discuss the inter-Korean efforts to make the JSA a weapon-free zone.

After the signing of the Korean War armistice agreement in 1953, the meeting room of the Neutral Supervisory Commission and the Military Armistice Commission conference room were set up in the JSA. As the name of the Joint Security Area indicates, the U.N. Command and North Korea jointly controlled the area.

In the past, some encounters inside the area have heightened military tension. For example, a brutal incident occurred on August 18, 1976, when U.N. troops were attacked by North Korean soldiers while trimming a poplar tree in the JSA. At the time, North Korean soldiers killed two American officers with axes.  South and North Korea now hope to build mutual trust by demilitarizing the tension-ridden area.

Established right after the 1953 armistice agreement, the square-shaped JSA is 800 meters wide from east to west and 400 meters long from north to south.

It was originally a neutral zone where soldiers of both South and North Korea were allowed to move freely across the border. But after the infamous axe murder incident in 1976, the military demarcation line inside the JSA was marked by a concrete slab, with members of each side prohibited from crossing the line and security posts in the two sides separately guarding their respective areas.

To date, there have been no incidents as serious as the poplar tree axe murders inside the JSA, but there have been a handful of defections, and as mentioned previously shots were fired in the area last year at a North Korean soldier fleeing to the South.

But the JSA is set to embrace a positive change, following this year’s summit between South Korean President Moon Jae-in and North Korean leader Kim Jong-un.

In the military agreement signed during the inter-Korean summit in September, South and North Korea confirmed the principle of disarming the JSA and agreed on specific measures to implement the plan.

Accordingly, demilitarization measures, including removing land mines, firearms and guard posts in the JSA, were carried out from October 1. And the two Koreas and the U.N. Command have completed their joint verification of disarmament in the JSA.

Under the inter-Korean military agreement, the two Koreas and the U.N. Command completed the process of disarming the JSA on October 25, pulling out firearms and guard posts from the area. For the following two days, the three sides conducted joint verification work to confirm the actual implementation of the JSA disarmament. As a result, the JSA has become a weapon-free zone for the first time in its 65 year history.

Now, a South Korean guard post will be located at the northern side of the JSA, while a North Korean post will be situated on the southern side. The unusual positioning of guard posts serves to prevent defections. It is very rare for ordinary citizens to enter the JSA, where guards from the South and the North stand face to face in tense confrontation.

But once the JSA is disarmed, civilians and tourists from the two Koreas will be allowed to visit the area and freely tour buildings there, including the Freedom House where the first Moon-Kim summit was held in April and the Tongil-gak(통일각) building on the North Korean side of Panmunjom.

Nine guard posts have been removed in the JSA—five from the North Korean side and four from the southern side. After South Korea builds a guard post on the northern side and the North builds one on the southern side, civilians will be able to visit the JSA as early as this month. Mr. Shin now talks about the significance of an arms-free JSA.

I’d say that the two Koreas have demonstrated an exemplary case of defusing military tension and building trust on their divided peninsula. Touring the JSA freely will surely be a new experience for visitors from both South and North Korea.

The weapon-free JSA will be a first step towards strengthening progress in cross-border relations. Also, easing military tension is one of the ways to comply with the current armistice system, something I think is important to normalize.

The JSA, long a symbol of national division and cross-border tension, has turned into what many hope will be a lasting symbol of inter-Korean peace and harmony. Importantly, disarming the JSA marks a tangible manifestation of commitments made in the September 19 inter-Korean military agreement.

Following this positive development, militaries of the two Koreas are expected to speed up discussions on various other issues, including the joint excavation of remains of fallen soldiers from the Korean War within the Demilitarized Zone, a test withdrawal of guard posts from the zone, and joint research at the Han River estuary.

I believe the JSA disarmament will pave the way for the two Koreas to implement various agreements, including developing the DMZ into a peace zone. Then, the two sides will hopefully be able to move on to the next trust-building stage of arms control.

On October 26, Seoul and Pyongyang held their first general-level military talks since the Pyongyang Declaration in September. During the talks, the two sides agreed to remove front-line guard posts by the end of November and to conduct joint research at the mouth of the Han River.

Disarming the JSA is described by some as a small experiment of unification. Starting with a weapon-free JSA, the South and the North should hopefully carry out their military agreements smoothly and make their peninsula peaceful and free of war.