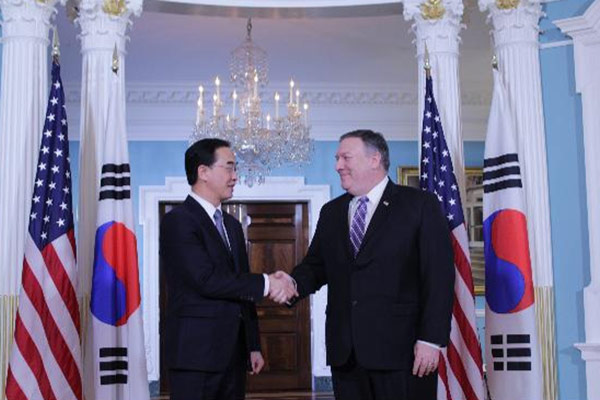 High-level talks between North Korea and the U.S. might be held as early as this month, while South Korea, North Korea and the U.S. continue their diplomatic engagement ahead of a possible second summit between Pyongyang and Washington early next year. With more, here is Professor Chung Dae-jin from the Ajou Institute of Unification at Ajou University.

South Korean Unification Minister Cho Myoung-gyon(조명균) made a five-day visit to the U.S. last week. A U.S. visit by a minister in charge of inter-Korean affairs, not a foreign minister, might be considered rather unusual. But Cho’s recent U.S. visit can be understood in the context of the unique relations between South and North Korea. The U.S. perceives Korean Peninsula issues from a global point of view, while South Korea pays special consideration to the unique aspects of inter-Korean ties as well.

It appears Cho discussed several issues with U.S. officials during his stay from November 13 to 17, and the drawn-out denuclearization talks were likely on the agenda. In particular, the minister’s meeting with U.S. Secretary of State Mike Pompeo on November 16 focused on ways to settle peace on the Korean Peninsula.

Meanwhile, South Korea and the U.S. have created a working group on North Korean affairs.

In addition to a number of working-level communication channels between Seoul and Washington, the two allies have launched a working group designed to facilitate coordination on the denuclearization of North Korea.

Some are concerned that South Korea and the U.S. have been at odds in their approach to North Korea’s denuclearization, but even allies are not on the same page on everything. They may have differing views, but how to fine-tune the differences effectively will determine the strength of their alliance.

I think the two countries have coordinated well so far. The newly established working group reflects close cooperation and proactive efforts to narrow the gap, if there is any, between their respective positions on some issues.

As Professor Chung explained, the South Korea-U.S. working group is expected to dispel worries about a rift in the allies’ approach to North Korea and ensure their smooth and efficient communication.

Talking points at the inaugural working group meeting included joint inter-Korean projects, such as connecting railways and roads across the border. Of course, relevant construction cannot start right away, with sanctions on North Korea still in place. But preliminary steps like designs and field inspections should be taken in some capacity. However, South Korea cannot carry out these measures unilaterally and should consider international community perspectives.

During their working group meeting, I think South Korea and the U.S. discussed whether the two Koreas could prepare for connecting cross-border railways and roads without violating sanctions on the North, or if sanctions exemption is possible for the railway project.

After the meeting, Korean co-chair Lee Do-hoon told reporters that the U.S. government expressed its strong support for the joint study of the inter-Korean railway project. South Korea and the U.S. agreed to continue their working group meetings on a systematic and regular basis. The U.S. State Department echoed the view, stressing stronger cooperation between allies to achieve the goal of denuclearizing North Korea.

The U.S., in the meantime, is seeking to diversify contact points with North Korea through both diplomatic and intelligence channels. Andrew Kim, the head of the Central Intelligence Agency’s Korea Mission Center, was recently in South Korea on a previously unannounced visit, suggesting to many the groundwork is being laid for resumed North Korea-U.S. dialogue.

Andrew Kim’s recent South Korea visit indicates that the U.S. is making its own effort to hold talks with North Korea. In fact, U.S. Special Representative for North Korea Stephen Biegun still hasn’t met his North Korean counterpart Choe Son-hui(최선희) since he was appointed to the post in August. Also, high-level talks between the two sides still remain up in the air.

In this situation, news about Kim’s visit to South Korea and his meeting with some North Korean officials show that the U.S. is moving quickly to convene high-level talks. It is speculated that North Korea, too, wants to improve ties with the U.S. and find a breakthrough.

Andrew Kim is known to work closely with Pompeo, and Kim played a key role in making the June summit between North Korea and the U.S. happen. His latest visit to South Korea is therefore seen by many as part of efforts to pave the way for more dialogue, including another meeting between the U.S. Secretary of State and his North Korean counterpart.

The high-level meeting might be held as early as late November. About a month ago on October 22nd, Pompeo told reporters that he was looking forward to North Korea-U.S. high-level talks in ten days. But the meeting initially set for early November fell through, apparently due to scheduling conflicts. So, once the two sides agree on a schedule, the meeting could be held as early as next week.

However, it doesn’t seem easy to coordinate an agenda for talks. Even so, North Korea and the U.S. could push for an official, face-to-face meeting to advance their relations. In this sense, it is hoped that the two sides will convene the high-level talks within this month.

North Korea and the U.S. are working hard behind the scenes to better improve their relations and dialogue. It remains to be seen whether these efforts will bear fruit.