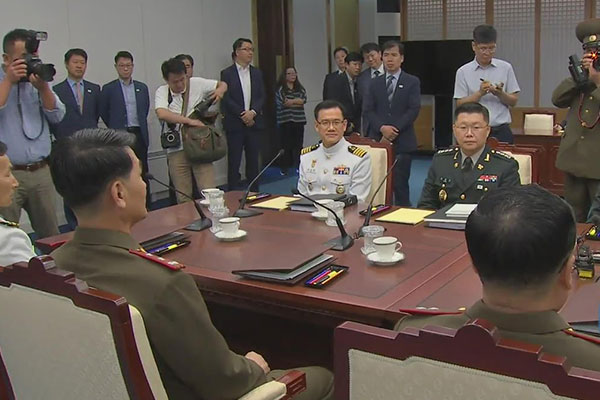 South and North Korea held general-level military talks at the truce village of Panmunjom on Tuesday, July 31. The talks were the second of their kind under the Moon Jae-in government in South Korea and the ninth meeting overall. In an unusual move, the talks were held at the proposal of North Korea. Here is Shin Beom-chul at the Asan Institute for Policy Studies to explain the significance of the latest inter-Korean military talks.

The military talks were aimed at implementing the Panmunjeom Declaration step by step, with the two sides discussing measures to ease military tensions and build trust.  South and North Korea have already stopped propaganda broadcasts along their border. During their first general-level talks since this year’s inter-Korean summit, they agreed to restore their military communication lines. South Korea has also postponed part of their combined military exercises with the U.S. to contribute to building trust with the North. North Korea, for its part, apparently hopes to speed up economic cooperation with South Korea, while it wants to implement denuclearization slowly. That’s why Pyongyang was committed to the recent inter-Korean military talks.

The general-level military talks, the first such meeting in 47 days, drew special attention even before the talks began. That’s because North Korea proposed the talks first and showed a forward-looking attitude. On the way to the meeting venue, the North Korean delegation changed their course and looked around the tree that had been jointly planted by the leaders of the two Koreas during their April 27 summit. In the meeting room, the North Korean delegates exchanged warm greetings and words of blessing with their South Korean counterparts. The talks began at 10 a.m. in a friendly atmosphere and lasted for over eight hours. Mr. Shin talks about what the two sides discussed at the talks.

The South and the North mainly discussed the issue of turning the Demilitarized Zone or DMZ into a peace zone, such as disarming the Joint Security Area in the DMZ and withdrawing troops from some guard posts in the DMZ on a trial basis. The two sides also agreed on the need to jointly excavate remains of soldiers in the DMZ, as part of efforts to build mutual trust in the military area, just as North Korea returned the remains of American soldiers who died in the Korean War. It seems they also made some progress in their discussion about how to establish a peace zone near the Northern Limit Line in the West Sea, which has been a major flashpoint. It is said that the South and the North saw eye to eye on the need to reduce risks and defuse tensions in the sea area by suspending firearms training or covering the guns of warships or coastal artillery.

The two sides discussed four major issues—disarming the Joint Security Area in the DMZ, the joint recovery of war remains in the DMZ, the mutual pullout of guard posts from the DMZ as a pilot program and a halt to hostile acts in the West Sea. These discussion topics comprise the key task of turning the DMZ into a peace zone, which was agreed in the Panmunjom Declaration. In particular, the joint evacuation of guard posts from the DMZ could be a steppingstone to following the armistice agreement that bans heavy weapons inside the DMZ. The joint excavation of war remains in the DMZ could also lead to a similar project involving the two Koreas and the U.S. While the South and the North shared their views on these issues, they failed to produce a joint statement at the military talks.

South Korea seemed to be adjusting the pace. Confidence-building measures were discussed at the level of South and North Korean militaries on the one hand, while denuclearization negotiations are being held between North Korea and the U.S. on the other hand. The two discussions should go in tandem. If trust-building discussion proceeds too fast amid slow denuclearization talks, it may cause an imbalance between the two. South and North Korea might differ in opinions about some issues, but the Seoul government seemed to be trying to keep a balance between the two discussions. I evaluate the government’s efforts positively.

Currently, the South Korean military operates 80 guard posts in the DMZ, where there are about 160 North Korean guard posts. The number of troops stationing at the guard posts reaches 12-thousand, including 10-thousand North Korean soldiers. The DMZ is the world’s only place where large-scale forces of different nations are deployed up close in military confrontation, and transforming this heavily armed DMZ into a peace zone requires extensive discussions. Right before the general-level talks began on Tuesday, North Korea mentioned the issue of declaring an end to the Korean War. But it was difficult to touch on this issue at the military talks.

The general-level talks were focused on trust-building measures. I’d say that declaring an end to the war is a diplomatic activity involving presidents or foreign ministers of relevant countries. So, strictly speaking, it was not an issue to be dealt with at the military talks. North Korea requests the U.S. to resolve this issue promptly, while the U.S. insists that North Korea take practical denuclearization measures first, such as declaring its nuclear programs. Having these differences in opinion in mind, North Korea mentioned the end-of-war declaration issue, which is related to peace on the Korean Peninsula, although it was not an official discussion topic of the inter-Korean military talks.

During the latest talks, Seoul and Pyongyang made efforts to find some common ground on sensitive issues, on which the two sides have clearly differing views. Both sides evaluated the meeting positively, raising hopes for future talks.

South and North Korea will continue to discuss ways to change the DMZ to a peace zone at working-level talks in the future. Both the discussion of building confidence between the militaries of the two Koreas and the denuclearization negotiations need to proceed well in a balanced way, as the two matters have much to do with regional peace. Seoul and Pyongyang have to expand bilateral cooperation and exchanges to various areas, other than the military, while there should be progress in denuclearization talks as well. It couldn’t be better if this virtuous cycle structure is built swiftly and peace is established on this divided peninsula on a more solid basis.

The South and the North plan to discuss detailed timeline and methods for the joint excavation of war remains in the DMZ and the mutual withdrawal of border guard posts on a trial basis through working-level contact. The two Koreas have accelerated efforts to ease military tensions since their summit in April. North Korea’s denuclearization measures should also be carried out quickly to provide crucial momentum for settling peace in this part of the world.