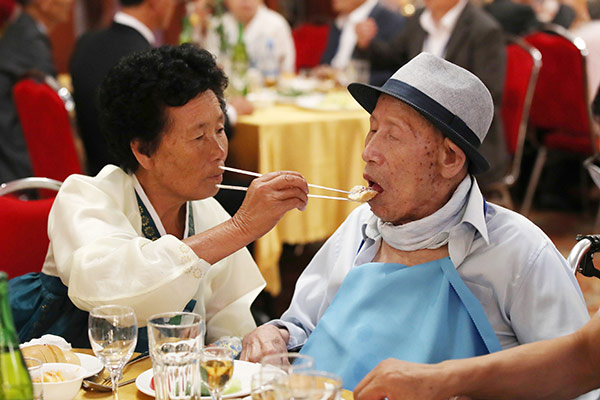 Family members torn apart by the Korean War have been reunited with their long-lost kin, as the inter-Korean reunion program resumed after nearly three years. The reunion program started on August 20 at North Korea’s Mt. Geumgang, where the separated family members finally had some of their pain and sorrow comforted after the long separation from their loved ones. Here is commentator Choi Young-il to discuss the long-awaited, tearful reunions.

The ongoing reunions are the first such event in two years and 10 months, as the program was suspended under the previous Park Geun-hye government in South Korea due to North Korea’s repeated nuclear provocations. But a delegation of North Korean special envoys came down to South Korea early this year to discuss the North Korean participation in the PyeongChang Winter Olympics. At the April 27 inter-Korean summit, the leaders of South and North Korea agreed to resume the humanitarian program immediately. The two sides later held several meetings to discuss this matter, and the reunions have finally been held. For the first round of reunions that started on August 20, 89 South Korean family members gathered in the east coast city of Sokcho in the evening of August 19. In fact, 100 members were supposed to participate in the program. But 11 people gave up on the reunions at the last minute due to health reasons. Given their old age, it is quite understandable. The 89 participants departed from Goseong at 8:30 in the morning on August 20 and traveled to Mt. Geumgang by bus.

In line with the April 27 Panmunjom Declaration, the Unification Ministry and the National Red Cross in South Korea selected 500 preliminary candidates, using a computer lottery system, for the 21st inter-Korean family reunion program. The South and North then exchanged lists of people wishing to take part in the program. 89 South Koreans met their North Korean relatives in the first round from August 20 to 22, while 83 North Koreans will be reunited with their families from the South in the second round from August 24 to 26. Renovation of the reunion facilities at Mt. Geumgang, including a restaurant and a hotel, took place over the past month. The group reunion, which was the first reunion event, started at 3 p.m. on August 20. That day, the reunion venue became a sea of tears. The unfortunate people who had not even known whether their lost family members were dead or alive for nearly seven decades, saw each other’s faces and embraced. 197 South Koreans, including the 89 separated family members and those who accompanied them, met their 185 North Korean relatives in the group meeting. They all had their own sad stories.

The oldest South Korean participant was 101-year-old Baek Sung-gyu, who met his daughter-in-law and granddaughter. When asked by reporters how he felt, the old man said, “I feel great. I feel like I’m on top of Mt. Geumgang.” In a heartrending story, a South Korean participant named Yoo Gwan-sik, who is in his late 80s, didn’t even know his wife was pregnant when he decided to defect to South Korea alone temporarily. Yoo applied for the reunion program in South Korea to locate his wife in the North. But it turned out that his wife had passed away and he had a daughter whom he had never seen in his whole life. The daughter was born in North Korea after he came to South Korea. He cried so hard when he met his daughter, now an old woman. Watching the tragic scene, many Koreans probably wondered how miserably the war and national division affected people’s lives.

The participants included a mother who met her son for the first time in 68 years since she had been separated from him when he was just four-years-old, a man who left behind his youngest sister when leaving his hometown alone, and as Mr. Choi said, a father who didn’t even know his daughter existed until he was 89 years old. While the split family members shared the emotional and tear-jerking stories, the first day of the reunions was over. The next day, there was some good news awaiting the family members.

The second day was the highlight of the event. The participants were allowed to meet their relatives individually in their own rooms, without being monitored by North Korean officials, so they felt free to talk to each other. They also enjoyed lunch together comfortably in their private rooms, where pre-cooked meals were delivered. On the third and last day of the reunions, something unexpected happened. The participants were initially to meet their relatives for 11 hours in six meeting sessions during the three-day program. But the authorities in the two Koreas extended the last day’s meeting by another hour. The participants were supposed to have lunch for two hours from 11 a.m. to 1 p.m., but the morning’s reunions began an hour early at 10 a.m.

Unlike in previous reunions, the latest event considerably excluded political elements and showed great consideration to the participants. Sadly, though, the time to bid farewell approached. At 1:28 p.m. on August 22, the South Korean family members boarded the bus. After a brief reunion, they had to part with their loved ones again. They desperately grabbed the hands of their relatives through the bus windows and made a pinky promise to meet again. Unfortunately, one-third of the 89 South Korean members are aged over 90. Given their advanced age, the promise only makes us feel sad.

My grandparents and father also came from North Korea. They have all died. Watching the reunions of those lost people, I feel like they are my own family. What worries me the most is that the separated family members are aging rapidly. At the latest reunions, for instance, only seven families met their immediate family members like parents or children. Also, reunions of brothers or sisters were held among just 20 families. The others were about reunions of nephews, nieces, uncles or aunts. During the reunions, they asked each other how their immediate family members had lived or died to get a picture of their family history, as if piecing together a jigsaw puzzle. The displaced family members should be allowed to see their lost relatives again while they are still alive. This is a grave task and obligation shared by both South and North Korea.

Some 132-thousand South Koreans have registered as separated family members at the Unification Ministry since 1988. Among them, 56-thousand are alive, and of the survivors, 12-thousand are aged over 90. The reunions should no longer be delayed, with the first-generation of separated families passing away fast. During the inter-Korean summit planned for next month, South and North Korea will hopefully be able to reach an agreement on regular family reunions as well as denuclearization.