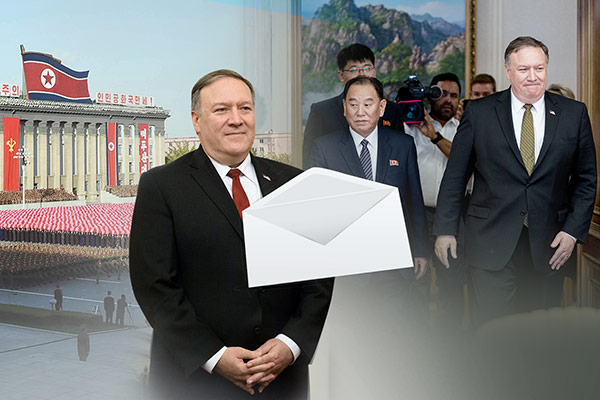 U.S. President Donald Trump has cancelled what would have been Secretary of State Mike Pompeo’s fourth visit to Pyongyang. Though previous meetings have yielded few tangibles, many expected a breakthrough at this now-canceled summit. With more, here’s Kim Geun-sik, professor of political science and diplomacy at Kyungnam University.

According to media reports, a tough-worded letter delivered to the U.S. through North Korean senior official Kim Yong-chol derailed Pompeo’s visit to North Korea. It is assumed that the letter had a strong warning that the denuclearization talks between Trump and North Korean leader Kim Jong-un may end up collapsing. Given this ultimatum, the Trump Administration likely felt it was risky to send Pompeo to Pyongyang again only to come back empty-handed. By walking away from the meeting, the administration underscores a continued hardline approach to Kim Jong-un.

The Washington Post reported earlier this week that Trump called off the visit on August 24 – just a day after Pompeo confirmed the meeting was still going forward – apparently because of a threatening letter delivered from North Korea. On Twitter, Trump said there was “not sufficient progress in denuclearization of the Korean Peninsula” as the reason for his decision. It is the first time the U.S. President publically acknowledged lack of progress in North Korea’s denuclearization after declaring "There is no longer a Nuclear Threat from North Korea” upon his return from his summit with Kim Jong-un this past June. On August 28, Secretary of Defense James Mattis said the U.S. had no plans to suspend future military drills with South Korea.

In response to the seemingly hardline communique from Kim Jong-un, the U.S. may respond by resuming some measures it had previously decided to suspend during the negotiation process before and after the June 12th Trump-Kim summit. The U.S. is likely to resume its combined military drills with South Korea. In an apparent move to pressure the North Korean leader, the U.S. showed that it would remain firm in its position, even at the risk of resetting bilateral negotiations.

The U.S. is stepping up its pressure on North Korea, believing that solely diplomatic means such as dialogue and negotiations provide insufficient incentives for North Korea to take the initial step towards denuclearization. Still, Secretary of State Pompeo has used the word “delay” rather than “cancel” in regards to his North Korea visit, saying that Washington is ready for talks with Pyongyang if the North is prepared to at least partly denuclearize.

“Riding the tiger” is one phrase one may use to describe Kim Jong-un’s current situation. For the North Korean leader, denuclearization has proven challenging, but he cannot just walk away and ignore it. This is not unlike one who manages to get on and ride a tiger but is now afraid to get off. Kim is making strong demands to the Americans, such as the declaration of an end to the Korean War and a peace treaty. Though perhaps risky, he still finds it difficult to abandon this position and negotiations altogether. Similarly, breaking off the negotiations before the November midterm elections in the U.S. is likely to hurt Trump and the Republican Party, who have relentlessly touted the denuclearization talks with Kim Jong-un as their crowning foreign policy achievement. Thus both sides will continue to apply strong pressure to negotiations but not enough to abandon them entirely.

Another important player, China, is as well in a tricky situation. In a series of tweets, President Trump appeared to shift blame for the slow denuclearization talks onto China, suggesting they are enabling North Korean recalcitrance as retaliation for the on-going U.S.-initiated trade war between the U.S. and China. Under these circumstances, Chinese President Xi Jinping will reportedly visit Pyongyang on September 9th to commemorate the 70th anniversary of the foundation of the North Korean regime. It will be the fourth meeting between Xi and Kim this year.

The Chinese leader is in a tough position. Because of Trump’s accusations of Chinese culpability, Xi Jinping may question his visit Pyongyang amidst an escalating trade war with the U.S. But it may be a blow to his reputation and pride if he cancels the visit because of something Trump tweeted. More importantly, China and North Korea have managed to restore their long-stalled relations, while the denuclearization talks between North Korea and the U.S. have been underway. In the process, Kim Jong-un visited China as many as three times this year. So, despite some difficulties, Xi will likely go ahead with the September trip.

North Korea has remained silent so far, in contrast to its quick response to Trump’s announcement in May to cancel his summit with Kim Jong-un. Now, the situation has changed. Kim did hold a summit with Trump, and Pompeo later visited Pyongyang. North Korea thinks that Trump will not walk away from the talks until at least November. Having this strategic calculation in mind, North Korea believes that it is Trump, not Kim, who is more desperate. For now, North Korea will watch whether Xi Jinping will visit Pyongyang next month. Also, it will wait and see the result of another inter-Korean summit planned for mid-September. While going through a kind of cooling-off period, Kim may think deeply on how to deal with a fresh round of denuclearization negotiations with the U.S. in the future.

It remains to be seen how Kim Jong-un will move forward following the cancellation of Pompeo’s North Korea visit. Momentum for North Korea-U.S. dialogue may continue to deteriorate, or improve once again.