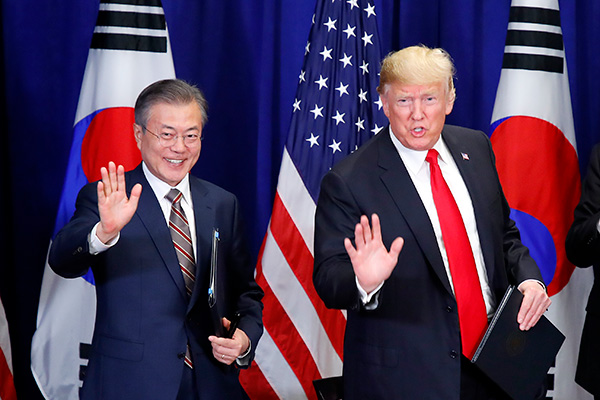 Following last week’s inter-Korean summit in Pyongyang, U.S. President Donald Trump said that a second summit with North Korean leader Kim Jong-un will be held soon. Trump made the remarks during a meeting with South Korean President Moon Jae-in on Monday, September 24, who traveled to the U.S. this week to participant in the UN General Assembly. In addition to a possible second North Korea-U.S. summit, Moon and Trump also discussed a formal end to the Korean War, raising hopes that the diplomatic negotiations between Pyongyang and Washington may move forward once again. With more, here’s Park Won-gon, international relations professor at Handong Global University.

The recent South Korea-U.S. summit clearly provided a breakthrough for stalled North Korea-U.S. negotiations. The April inter-Korean summit and the June summit between North Korea and the U.S. agreed in principle on denuclearization of the Korean peninsula, but there has been little progress thus far. South Korea, North Korea, and the U.S. are trying a top-down approach to resolve the denuclearization issue through a sort of grand bargain.

In this sense, meetings between top leaders are very important. South and North Korea agreed on forward-looking denuclearization measures to some extent during their summit last week, and it is highly crucial to actually implement those measures through a second North Korea-U.S. summit. The latest summit between Moon and Trump is significant since it may very well facilitate another summit between the North and the U.S.

The Pyongyang summit last week did not reveal specific denuclearization measures or a U.S.-requested timeline. But upon returning home from the three-day summit on September 20, the South Korean president revealed he would relay private correspondence from Kim Jong-un to Donald Trump.

I imagine the message contained language regarding Washington’s reciprocal measures and Pyongyang’s additional denuclearization steps. Kim probably discussed with Moon what he wants from the U.S., including a declaration formally ending the Korean War, as well as additional steps North Korea can or should take on top of dismantlement of its nuclear enrichment facility at Yongbyon. I suspect Moon talked about these issues with Trump during their meeting earlier this week. A desired roadmap for the North’s denuclearization is concurrent implementation of step-by-step measures by the U.S. and North Korea.

After the South Korea-U.S. summit, the presidential office in Seoul said that the two leaders discussed at length ending the Korean War as well as the possible date and venue for a second North Korea-U.S. summit. Notably, Trump made it clear that he expects to hold a second summit with Kim, saying that there has been tremendous progress with North Korea.

The remarks indicate that the North Korea-U.S. talks, which have made little to no progress since the historic Kim-Trump summit in June, may be put back on track. Some analysts predict that a second North Korea-U.S. summit will be held sometime in October.

A second North Korea-U.S. summit in October is a best-case scenario, given the U.S. mid-term elections on November 6. The second summit before the elections could be followed by a formal declaration ending the Korean War. But North Korea and the U.S. will first have to hold working-level talks to discuss exactly when, how, and where to hold the summit.

I think U.S. Special Representative for North Korea Stephen Biegun and possibly North Korean Vice Foreign Minister Choe Son-hui will begin working-level discussions soon in Vienna. Once held, specifics about the date and location for the summit might be disclosed.

If a time and place can be agreed upon, a second North-Korea-U.S. summit would provide the impetus for further denuclearization talks and possibly a formal end to the Korean War.

The key is whether the Korean War will be brought to a formal end. It is assumed that Moon and Trump discussed this issue extensively. The South Korean government has pushed for the declaration of an end to the war by year’s end, as stated in the Panmunjom Declaration adopted at an inter-Korean summit in April. If that timeline lapses, it means no progress towards North Korea’s denuclearization. Since the end-of-war declaration issue is linked with Pyongyang’s denuclearization steps, the two measures should go in tandem. That’s why the South Korean president is trying to secure such an agreement by the end of the year.

In an interview with U.S.-based Fox News on Tuesday, Moon said that he and Trump discussed the possibility of officially ending the Korean War. He said he believes that the agreements on denuclearization will be implemented properly, as leaders of the U.S. and the two Koreas are strongly committed to solving the issue. Morever, Trump’s speech at the U.N. General Assembly this week confirms he and his administration are committed, for the time being, to solving the North Korean nuclear issue diplomatically.

Trump’s recent address at the U.N. is a stark contrast to his speech there last September, when he said the U.S. would have no choice but to totally destroy North Korea in defense of itself and its allies. It was the strongest language directed at North Korea delivered by a U.S. president.

But this year, Trump’s attitude was completely different. He said he is thankful to North Korean leader Kim Jong-un for his courage and for the steps the North Korean leader has taken towards diplomacy. Trump also mentioned the North Korean issue in an early part of his speech, touting it as an achievement for his administration. Regarding sanctions against North Korea, however, Trump said they would stay in place until denuclearization occurs on the Korean Peninsula.

Still, he seemed to be a lot friendlier toward North Korea on the whole, compared to the past, and his speech showed growing hopes for and possibility of North Korea’s denuclearization.

Speaking to the U.N. General Assembly on Tuesday, Trump said that the U.S. has engaged with North Korea to “replace the specter of conflict with a bold and new push for peace.” We’ll have to wait and see if the dramatic turnaround in North Korea-U.S. relations will lead to North Korea’s denuclearization and an improvement in bilateral relations.