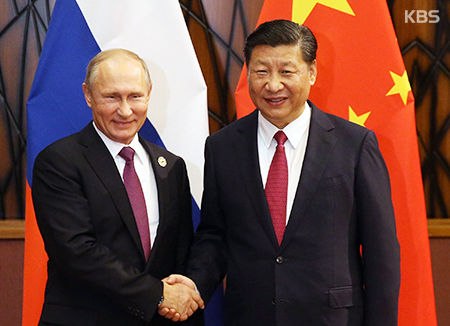 An era of long-term presidency has begun in China and Russia. Chinese President Xi Jinping was re-elected as president and chairman of the Central Military Commission in a unanimous vote at the National People’s Congress on March 17. Earlier, he abolished presidential term limits from the Constitution. Meanwhile, on March 18, Russian President Vladimir Putin also won the presidential election by a landslide to serve a fourth term. Now that top leaders of China and Russia, both of which border North Korea, can extend their terms in office, a change is anticipated in regional diplomacy. Here is Cho Han-beom, senior researcher at the Korea Institute for National Unification.

Following the rise of strongmen leaders in China and Russia, the two countries will likely accelerate the process of formulating their Korean Peninsula policy. As members of the six-party talks aimed at ending the North Korean nuclear crisis and permanent members of the U.N. Security Council, both nations have great influence over the Korean Peninsula. China, in particular, is keenly aware of growing speculation that it is losing its influence on North Korea amid active summit diplomacy among South Korea, North Korea and the U.S.

Among the neighboring countries, China is in the trickiest situation now. For China, North Korea is greatly significant as a strategic buffer zone, and that’s why Beijing has been representing itself as a country that wields the strongest influence over Pyongyang. However, relations between the two communist allies have gone from bad to worse since the emergence of the Kim Jong-un regime in North Korea. The North Korean leader brutally executed his pro-Chinese uncle Jang Song-thaek, and the regular North Korea-China summit has never been held under Kim Jong-un’s rule. Moreover, China is faithfully implementing international sanctions against North Korea, worsening bilateral relations even further. In the past, China led the six-party nuclear negotiations. But the current diplomatic situation leaves China little room to meddle in Korean Peninsula issues. The deteriorating relations between North Korea and China as well as China’s insufficient presence in regional diplomacy as of late are weakening its influence on North Korea and the Korean Peninsula as well.

China was the only country in the world that was able to exercise influence on North Korea. Since Kim Jong-un came to power, however, the two nations have been at odds. Bilateral relations have been deadlocked further since China began to join the U.N. Security Council’s sanctions on North Korea last year. But Chinese President Xi Jinping, who has now secured absolute power, is expected to mend ties with North Korea, considering that denuclearization of the Korean Peninsula is directly related to gaining supremacy in East Asia.

Obviously, China is in an urgent need of some kind of breakthrough. The complete denuclearization of the Korean Peninsula should go in tandem with the establishment of a peace regime, which means a peace treaty will replace the 1953 armistice. If that happens, North Korea and the U.S. could normalize their relations and even establish diplomatic ties. That is to say, North Korea-U.S. relations may improve rapidly, while North Korea-China relations are in their worst state ever. Then, North Korea will no longer be a buffer zone to represent China’s interests. Now that Beijing has stabilized domestic politics, it will certainly attempt to interfere in Korean Peninsula issues, including the North Korean nuclear crisis, more actively.

In an editorial on March 19, the Global Times in China said that South Korea, Japan and the U.S. should not disturb friendly relations between North Korea and China. As the nation’s state-managed newspaper to represent the position of the Chinese government, the paper apparently demonstrated Beijing’s commitment to restoring ties with North Korea inside and outside the nation. On a similar note, Russia is highly likely to intervene in Korean Peninsula issues down the road.

It is true that Russia has filled the gap that has widened between North Korea and China as a result of their worsening ties. The Putin government seeks to change its economic structure that relies on oil exports and to secure new engines for national development. For that purpose, it pursues the so-called new eastern policy to develop Russia’s Far East and Siberia. To implement this important national task, Russia needs an exit to the Korean Peninsula and cooperation with North Korea. On top of that, Moscow hopes to increase its influence in the Asia-Pacific region and enhance its position in the North Korean nuclear issue. In line with the Putin government’s strategic goals, Russia will consistently show greater interest in Korean Peninsula issues.

Putin is carrying out the “new eastern policy” to strengthen Russia’s position in East Asia after conflicts with Western countries over Ukraine. If a peaceful mood is created between South and North Korea, and between North Korea and the U.S., Putin’ policy of developing the Far East will gain more traction. Analysts predict that Russia will form even closer relations with North Korea and actively push for three-way cooperation among the two Koreas and Russia, while engaging in summit-level multilateral diplomacy.

If the six-party nuclear talks resume, China will exert its influence again. But if the negotiations over denuclearization or a peace regime are held in the form of North Korea-U.S. talks or dialogue involving the two Koreas and the U.S., these countries, not China, will take in the lead in the negotiations. That’s an embarrassing situation for China, although it may participate in the process of setting up a peace regime. Therefore, it is possible that China will consider a bilateral summit with North Korea, and Russia may also think about its own summit with North Korea. China and Russia may use summit diplomacy to expand their influence on Korean Peninsula issues.

The Korean Peninsula faces a major turning point in diplomacy, with involved countries waging a fierce diplomatic war in the region. In addition to an inter-Korean summit and a North Korea-U.S. summit, Japan, China and Russia are also planning a series of talks to beef up their presence in regional diplomacy. Amid a flurry of summit talks, attention turns to how the prolonged one-man rule in China and Russia may influence diplomatic developments in this part of the world.