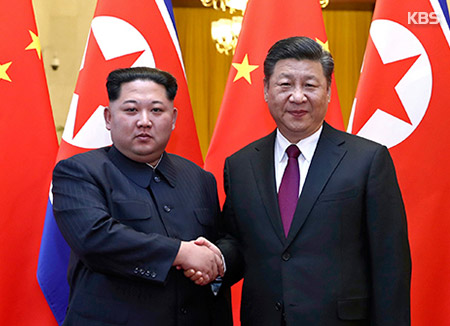 …So they want to try and slow roll the negotiations to buy more time. This is something they’ve done consistently over the last 25 years… not a theoretical discussion about these issues but very concretely, how they’re going to denuclearize North Korea…

Bolton is known as a super hawk in U.S. foreign policy. Three days after his nomination as the top security adviser to Trump, he reiterated his hard-line views on North Korea, saying that the U.S. should have a very straightforward denuclearization discussion with the North. Here is Professor Shin Beom-cheol at the Korea National Diplomatic Academy to examine the changing diplomacy surrounding the Korean Peninsula following the emergence of the American hardliner on North Korea.

Previously, as Undersecretary of State for Arms Control, Bolton strongly demanded North Korea’s denuclearization when the North Korean nuclear crisis erupted and severely condemned North Korean tyranny. It’s little wonder he was branded as an unwelcome person by North Korea, which even said that it would not participate in dialogue with Bolton. So he was excluded from denuclearization talks between North Korea and the U.S. Bolton has consistently raised his voice against North Korea, and now, he is expected to carry out strong foreign policy characterized by “peace through strength.”

Trump’s foreign policy and security team is being reorganized to bring in hardliners. He has replaced Secretary of State Rex Tillerson with Central Intelligence Agency Director Mike Pompeo and chose Bolton, who has argued for a preemptive strike on North Korea, as his national security adviser. The decision is likely to affect a North Korea-U.S. summit scheduled for May, since the incoming U.S. national security adviser advocates the Libyan-style nuclear disarmament as a means of denuclearizing North Korea.

Back in 2003, then-Libyan leader Muammar Gaddafi gave up nuclear weapons. At the time, Bolton served as Undersecretary of State for Arms Control. The U.S. disabled Libya’s nuclear capabilities and brought relevant equipment to the U.S. to make it impossible for the country to develop nuclear weapons again. In return, the U.S. promised to normalize diplomatic relations with Libya. But the process took two to three years. From North Korea’s point of view, Libya simply surrendered to the U.S. That’s not what North Korea wants. Pyongyang has said that it would negotiate with the U.S. on an equal footing as a nuclear weapons state. Therefore, even if Bolton talks about Libyan-style denuclearization, North Korea is unlikely to accept it for now.

The key of the Libyan-style denuclearization is “nuclear renunciation first and compensation later.” Libya announced its decision to give up its nuclear program in 2003 and terminated it 22 months later. In 2006, the U.S. made compensation by normalizing diplomatic ties with Libya. But North Korea, for its part, wants to abandon its nuclear weapons and have sanctions eased simultaneously. If Bolton participates in denuclearization talks amid differing views between North Korea and the U.S., the process of bilateral negotiations will not be smooth. Apparently feeling pressure from the disappearance of doves within the Trump administration, North Korean leader Kim Jong-un sought a breakthrough by visiting China. Let’s listen to a news report.

Kim recently made an unofficial visit to China at the invitation of Chinese President Xi Jinping and held a bilateral summit in Beijing. It was Kim’s first overseas trip since he took power in late 2011 and also his first appearance on the international diplomatic stage. Attention turns to why the North Korean leader visited China ahead of an inter-Korean summit and a North Korea-U.S. summit scheduled for April and May, respectively.

When making his debut on the international stage, Kim Jong-un chose to visit China first in a strategic and symbolic move to reinforce his diplomatic status and highlight the traditional relationship between the two communist allies. North Korea seeks to improve ties with China in a bid to raise its bargaining power. For North Korea, the rise of hardliners in the U.S. may lower its chances of finding a compromise with the U.S. Under these circumstances, North Korea seems to be enhancing its strategic status by using China.

Right before the first inter-Korean summit in 2000, then-North Korean leader Kim Jong-il traveled to China to meet then-Chinese President Jiang Zemin. Through the surprise visit to its traditional ally, North Korea demonstrated the bilateral alliance forged in blood and found a breakthrough to the diplomatic standoff with neighboring countries. If the past is any guide, the North Korean leader’s recent China visit is interpreted as Pyongyang’s intention to strengthen its negotiating power by using the restored ties with Beijing as leverage and to rebuild its economy with the help of China. Beijing, too, finds it important to mend ties with North Korea.

Ahead of the North Korea-U.S. summit, there is speculation that the two countries may reach a big deal and that the two Koreas and the U.S. may declare a formal end to the Korean War. Amid the growing speculation, China is beginning to change its attitude. In fact, China has joined international sanctions against North Korea, and the sanctions prompted the North to come to the dialogue table. In the course of imposing sanctions, however, China also suffered economic losses. If North Korea and the U.S. make some sort of compromise to recognize the U.S. Forces Korea and the South Korea-U.S. alliance, the U.S. will bolster its strategic status on the Korean Peninsula, while China has only sustained losses. Therefore, China will attempt to reflect its own position through North Korea. On a positive note, China agrees on North Korea’s denuclearization. So it could persuade the North to give up its nuclear weapons development. But in order to keep exerting its influence in regional diplomacy, China may ask North Korea to bring up the issues of the U.S. Forces Korea and the South Korea-U.S. alliance. In that case, it will not be easy for North Korea and the U.S. to come to a compromise.

The North Korea-China summit shows that Pyongyang wants to secure friendly forces, while Beijing seeks to dismiss the concerns about what some call “China passing.” The renewed relations between North Korea and China are emerging as a new factor that might affect Korean Peninsula issues. If China intervenes in dialogue ahead of the planned inter-Korean summit and the North Korea-U.S. summit, diplomatic calculations about denuclearization could be a lot more complex. Trump has filled the key security posts with hardliners, while North Korea and China have held a rare summit. In this situation, we’ll see how South Korea will display its diplomatic abilities.