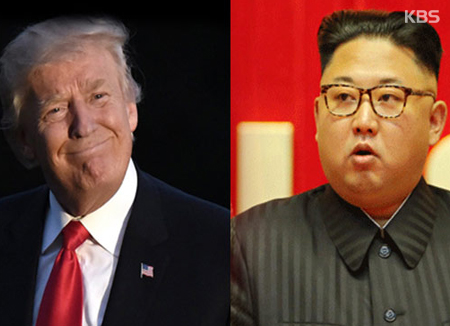 North Korea and the U.S. are speeding up their preparations to hold a bilateral summit. U.S. national security adviser John Bolton, who is known for his hawkish views on North Korea, took office on Monday, April 9, when President Donald Trump said at a Cabinet meeting at the White House that the U.S. has been in contact with North Korea to prepare for their summit. On April 10, North Korean leader Kim Jong-un also confirmed that his nation was pushing for talks with the U.S. The leaders of both North Korea and the U.S. have mentioned the bilateral summit simultaneously, indicating progress in preparations. Here is Moon Sung-mook, chairman of the Unification Strategy Center of the Korea Research Institute for National Strategy.

After Trump met with South Korean envoys in Washington and promised to meet with North Korean leader Kim Jong-un, there had been no signs of contact between North Korea and the U.S. So, there was doubt that the summit would be held as planned, while some others speculated that the summit might be postponed. But recently, the U.S. media reported working-level contact between Pyongyang and Washington, while Trump also said that he expects to meet Kim Jong-un in May or in early June and that he hopes to make a deal on denuclearization of North Korea at the summit. The latest developments have increased the likelihood of a North Korea-U.S. summit. It seems the two sides have almost set the schedule for full discussions.

There had been concerns that a North Korea-U.S. summit may not take place. Kim Jong-un’s proposal of a summit with the U.S. was indirectly disclosed through a group of South Korean envoys who visited North Korea. But after that, Pyongyang did not mention anything about the summit, and some politicians in the U.S. made a negative response to the proposal. However, the leaders of both countries have recently confirmed that their summit would be held, dispelling the uncertainty about the summit. Some speculate that the two sides have already coordinated a considerable part of their views on the agenda, venue and the date for the summit. Let’s hear again from Mr. Moon.

Regarding the venue for the summit, North Korea seems to opt for Pyongyang or the Mongolian capital of Ulaanbaatar. The U.S., on the other hand, appears to prefer neutral countries like Switzerland or Sweden. Other options might be South Korea’s Jeju Island and the truce village of Panmunjom on the inter-Korean border. It seems that North Korea and the U.S. have yet to agree on the location. Trump mentioned May or early June, so the two sides have neared an agreement on a rough schedule, although a specific date hasn’t been decided yet. Apparently, they need more time to fine-tune discussion topics. In regards to denuclearization, North Korea considers a “phased and synchronized” approach toward denuclearization, while the U.S. demands a prompt and complete denuclearization through a package deal. I imagine it will take some time for the two sides to coordinate their views on this tricky point.

It seems discussions are underway to decide on the location of the North Korea-U.S. summit, with candidates including Pyongyang, Washington D.C. and third countries such as Mongolia, Switzerland and Sweden. The agenda, which is the most attention-grabbing part, is still uncertain. But on April 8, the U.S. media reported that North Korea told the U.S. it was willing to discuss the denuclearization issue. Trump expressed his expectations for the summit, saying that North Korea signaled its commitment to denuclearization. Here again is Mr. Moon.

It seems Trump is confident about denuclearizing North Korea through the bilateral summit. As a master of negotiations, Trump seems to believe that he can persuade North Korea to produce a positive result, unlike his predecessors. By saying so, he is also urging North Korea to respond to his call for denuclearization as the U.S. demands.

Now that Trump has expressed his expectations for a summit with North Korea and mentioned the potential agenda of denuclearization, preparations for the summit are gaining traction. But there are still many tasks to contend with, since Pyongyang and Washington differ in views on the definition and process of denuclearization. Mr. Moon gives his thoughts on the situation.

North Korea has said that it is willing to discuss denuclearization. It is quite a positive shift from its previous stance. The North once said, “Don’t even bring up the denuclearization issue. Hoping for us to give up on our nuclear programs is more foolish than waiting for the Pacific Ocean to dry up.” Even if Pyongyang has softened its attitude lately, it still won’t accept Washington’s requests easily. Moreover, China supports North Korea’s position, and Russia will also likely side with North Korea. Therefore, it is hard to expect a result that the U.S. and South Korea want. It is highly likely that North Korea and the U.S. will hold their unprecedented summit. But South Korea still can’t be sure if North Korea will dismantle its nuclear weapons in a way South Korea wants, as North Korea and the U.S. have widely differing views on denuclearization.

“How to denuclearize North Korea” comprises a major bone of contention and the biggest issue that may determine the success or failure of the North Korea-U.S. summit. The uncertainty about the summit itself has been decreased, and we’ll wait and see how the historic summit may evolve.