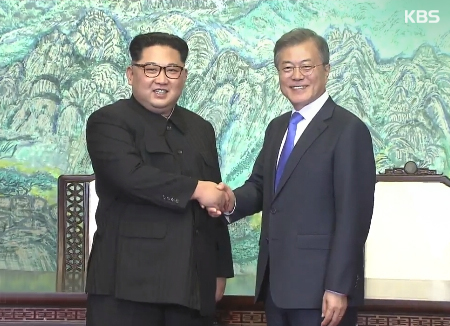 The starting point of the 2018 inter-Korean summit was the Berlin Declaration, which was announced by South Korean President Moon Jae-in during his speech at the Körber Foundation in Berlin, Germany on July 6 last year. The Berlin peace initiative envisioned the dissolution of the Cold War structure and the settlement of lasting peace on the Korean Peninsula as well as commitment to dialogue. But North Korea criticized the proposal as sophistry. And in September last year, North Korea went ahead with its sixth nuclear test. Relations between North Korea and the U.S. worsened further due to Pyongyang’s repeated provocations, with the Korean Peninsula enveloped in fears of war. Still, President Moon held fast to his commitment to talks with North Korea.

Only a year ago, war clouds lingered over the Korean Peninsula, and North Korea said that it would never abandon its nuclear weapons that would defend the nation. Nevertheless, the Moon government in South Korea did not give up hope and stuck to its consistent position that was first shown in the Berlin initiative. The Seoul government assured Kim Jong-un that it would work as an honest messenger between North Korea and the U.S., and that was the secret behind the success. It is true that South Korea has cooperated with the U.S. in many ways for the sake of the complete denuclearization of North Korea. But South Korea’s ultimate goal is to prevent war on the Korean Peninsula and induce North Korea to seek reform and openness so the two Koreas will achieve common prosperity. Seoul clearly delivered this message to Pyongyang, and this contributed greatly to realizing last week’s inter-Korean summit.

As analyzed by Dr. Bong Young-shik from the Yonsei Institute for North Korean Studies, the South Korean government’s consistent dialogue efforts brought about a change. North Korean leader Kim Jong-un expressed his willingness to engage in dialogue during his New Year’s speech in January this year. A conciliatory mood was created in February, when the North Korean leader’s younger sister Kim Yo-jong visited South Korea for the PyeongChang Winter Olympics. Amid rapid progress in inter-Korean relations, a South Korean delegation led by National Security Advisor Chung Eui-yong visited Pyongyang on March 5 to facilitate the process of an inter-Korean summit. Finally on April 27, the leaders of the two Koreas held a historic meeting in front of the military demarcation line in the truce village of Panmunjeom.

When Kim appeared on the northern side of Panmunjeom at 9:28 in the morning, Moon extended his hand for a handshake, smiling brightly. The two leaders took each other’s hands and exchanged greetings, standing on opposite sides of the military demarcation line, the symbol of the division of the Korean Peninsula. A moment later, a brief, unplanned event took place. Here is Oh Gyeong-seop, researcher at the Korea Institute for National Unification.

Moon and Kim met at the military demarcation line and in a surprise move, the two leaders briefly crossed over into the northern side of the line together and returned to the South. The scenes were very impressive. They symbolically showed that South and North Korea can overcome division and prosper together through reconciliation and cooperation.

The first meeting between Moon and Kim impressed the world, turning the military demarcation line that has separated the two Koreas for 65 long years into a place of peace. After reviewing an honor guard prepared by the South Korean military, the two leaders held summit talks, which started with their introductory speeches at 10:15 a.m. at the Peace House in Panmunjeom. Kim softened the atmosphere by joking about cold noodles from Pyongyang. The two leaders held a 100-minute discussion in the morning session of their summit. They separately had lunch and took a rest before meeting again in the afternoon. They planted a pine tree dating back to 1953, the year when the Korean War armistice was signed. After that, the two took a leisurely stroll on the Foot Bridge. They sat on a bench on the bridge and held a conversation without security personnel, instead of the planned official talks. The afternoon session of the summit began at 5:19 p.m., and the two leaders signed the joint statement at 5:58 p.m. They jointly announced the Panmunjeom Declaration at 6 p.m. in front of TV cameras, through which the scene was broadcast live across the world. Let’s listen to President Moon’s announcement. The two leaders specified “complete denuclearization” in the joint declaration. Here again is Dr. Bong.

The third inter-Korean summit was held under the slogan of “Peace, a New Beginning.” Most would agree that the latest summit was a success. But the Moon government is well aware that there is still a long way to go before peace will be established in reality, since North Korea’s complete denuclearization should come first as the most important precondition. It will be difficult for the two Koreas to ease military tension and build trust as long as North Korea continues to possess nuclear and missile capabilities. The inclusion of the phrase “complete denuclearization” in the Panmunjom Declaration shows that South and North Korea will join forces to fulfill the ultimate goal of the complete denuclearization of the Korean Peninsula. The denuclearization negotiations will be held between North Korea and the U.S. after all. But before that, it seems North Korea wanted to discuss an improvement in inter-Korean relations with President Moon and to prepare for a summit with the U.S. through successful inter-Korean talks.

North Korea signed a document that includes the word “denuclearization” for the first time. It is seen as the North Korean leader’s expression of his view on complete denuclearization ahead of the North Korea-U.S. summit and a signal toward U.S. President Donald Trump, who has consistently demanded a complete, verifiable and irreversible dismantlement of North Korea’s nuclear weapons. The leaders of the two Koreas also agreed to seek to declare an official end to the Korean War within this year and turn the armistice agreement into a peace treaty. For that purpose, the two sides plan to actively pursue three-way talks involving the two Koreas and the U.S. or four-way talks among the two Koreas, the U.S. and China. The Panmunjeom Declaration is also dedicated to an improvement in inter-Korean relations. In fact, six points of the 13-point declaration have to do with advancement in cross-border ties. The declaration inherits many parts of the October 4 Declaration that was announced at the second inter-Korean summit in 2007, raising expectations for inter-Korean economic cooperation, starting with the reconnection of cross-border railways and roads. In addition, the declaration includes agreements on opening a joint liaison office, holding reunions of separated families on August 15, stopping all hostile acts against each other and President Moon’s Pyongyang visit this coming fall. Let’s hear again from Mr. Oh.

The latest inter-Korean summit is significant in three ways. First, the two leaders adopted the Panmunjeom Declaration that pursues peace and prosperity on the Korean Peninsula and unification. Secondly, they confirmed their common goal of complete denuclearization and promised to work together for that goal so they provided crucial momentum to mend bilateral ties, ease military tension and establish permanent peace on the peninsula. Thirdly, they laid the groundwork for improving relations based on mutual trust, as seen in the agreement on President Moon’s Pyongyang visit.

While Moon and Kim declared their commitment to breaking the chain of division, hostility and confrontation and to moving toward an era of peace and prosperity, the first ladies of South and North Korea met for the first time in history. South Korean First Lady Kim Jung-sook warmly greeted her North Korean counterpart Ri Sol-ju, who arrived at the Peace House at 6:18 p.m. They entered the banquet room for dinner, which started at 6:39 p.m. The dinner lasted for more than two hours in a friendly and pleasant mood. After a farewell event, the 12-hour historic inter-Korean summit came to an end. The significant summit was welcomed by many countries around the world. U.S. President Donald Trump, in particular, highly evaluated the stipulation of the phrase “complete denuclearization” in the inter-Korean joint declaration and expressed his expectations for the North Korea-U.S. summit. Some doubt that the Panmunjeom Declaration will actually be put into action. In the past, South and North Korea reached meaningful agreements but often failed to implement them, bringing bilateral relations back to square one. As if dismissing the concerns, the presidential office in Seoul held a press conference on April 29 and unveiled additional inter-Korean agreements. Here is Mr. Oh to explain.

Also, North Korea decided to move its clock forward 30 minutes, back to the same time as in South Korea. Initially, South and North Korea used an identical standard time, but Pyongyang adopted its own time zone by pushing back its standard time by 30 minutes in August 2015. Time zones in most countries usually differ by a full hour rather than half an hour. North Korea’s return to the original time zone is interpreted as its intention to show that it is a normal state and to improve relations with South Korea. Pyongyang announced on April 30 that it will unify its time zone with South Korea’s starting May 5. As North Korea implemented its leader’s verbal promise to re-set the standard time, the Defense Ministry in South Korea also executed one of the following measures of the Panmunjeom Declaration. It started to remove anti-North Korean regime loudspeakers installed along the inter-Korean border on May 1. The propaganda broadcasting speakers were seen as an effective means of psychological warfare against the North. Efforts to implement the Panmunjeom Declaration are being made on the international diplomatic stage as well. Here again is Mr. Oh.

Ahead of the North Korea-U.S. summit, President Moon will hold a summit with Trump. After summit talks among South Korea, China and Japan on May 9, Moon will also hold a bilateral summit with Japanese Prime Minister Shinzo Abe. While making efforts to resolve the denuclearization issue through discussions with North Korea and the U.S., South Korea will also engage in diplomatic activities to enlist support from China and Japan, both of which are greatly interested in Korean Peninsula issues.

At the South Korea-China-Japan summit scheduled for May 9 in Tokyo, Moon will discuss three-way cooperation for implementing the Panmunjom Declaration. After that, he is likely to meet Trump for their bilateral summit. Through a series of summit talks, South Korea will fully explain inter-Korean agreements to the international community and draw international support for the achievement of the latest inter-Korean summit. With Seoul actively playing a bridging role between Pyongyang and Washington, there is a growing possibility of a successful summit between North Korea and the U.S. Let’s hear again from Dr. Bong.